Maggie here. I am going to tell you what happened today because I know that Mom doesn't want to admit any of it. First of all, I want you to notice that I am wearing my orange jacket for safety in the fall. There are still a few colorful leaves on the trees, and when the sun comes out, which it did today, they are still pretty. 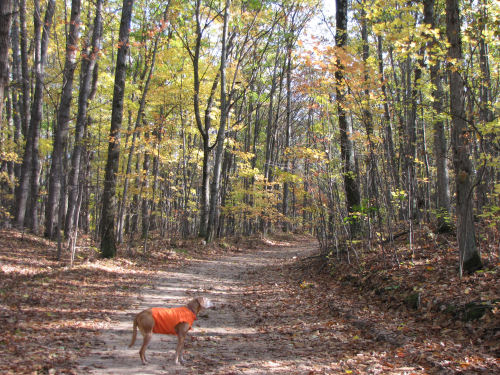 Well, we drove to a place where we hike sometimes. We walk an old woods road over to the North Country Trail, follow it for a while, and then cut back to the real road and go back to the car. Just so that you understand what I mean, that's the real road that I'm standing in. Old woods roads haven't been driven in years.

But when we got there, Mom changed her mind. She decided to take a different road over to the NCT. Then she saw an even older road going off in the other direction, and decided to see where it went. So we did. But she promptly forgot that she'd turned off the first real road (Fox Trail) to the left.

The sun was out, so it was easy to tell that we were going north. That was fine. The sun made every patch of moss glow. I can't tell if the moss looks like green caterpillars, or if the caterpillars look like moss. Can you? 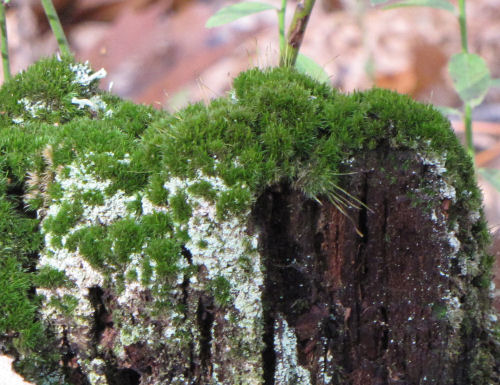 The farther we went, the dimmer and dimmer that old road got, until it finally petered out. Mom considered whether to turn around, or just keep going. She knew that Oak Road was to the north. She thought the NCT was to the east, and Fox Trail to the west. So she decided to keep going. How lost could we get? Humans call this bushwhacking. I just call it walking.

We continued north and came to a little pond that we've never seen before. It was pretty, but the water didn't taste so good. I tried it. 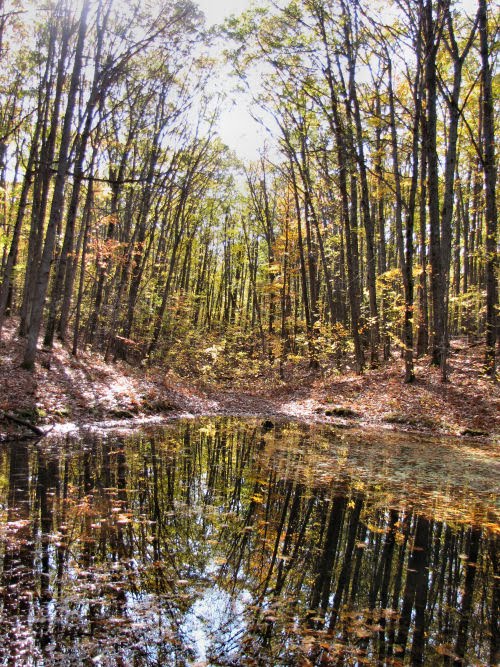 At the pond we joined another old road that headed northeast. Pretty soon we came to Oak Road. Just like Mom thought. But... she forgot that she had started by going west off Fox Trail, so she thought we needed to go west to get back to the car. Nope. So we walked all the way out to the paved road. I think she was trying to figure out if we'd gotten into a time warp and Fox Trail had disappeared.

It's funny how things look all wrong when you are expecting other things. She had forgotten that motorsports trails cross Oak Road in two places. She had never noticed two really big rocks beside the road. When we got to the pavement, we had to turn around and walk right back. Where the heck was Fox Trail? These are roads that she drives all the time. I just stuck out my tongue and laughed at her, but she didn't notice.

So we walked back past where we had come out on Oak Road, and sure enough, Fox Trail hadn't moved. When we were almost back at the car we passed the corner where we had first left Fox Trail. Mom just shook her head, and I could tell she finally realized what she had done.

I know she won't want me to tell this story, because her friends think she ALWAYS knows where she is in the woods. Maybe she pays attention better when someone is counting on her.

Anyway, we had a great walk and found a few bright leaves yet. It wasn't really that big of a deal. We walked about 5.5 miles. 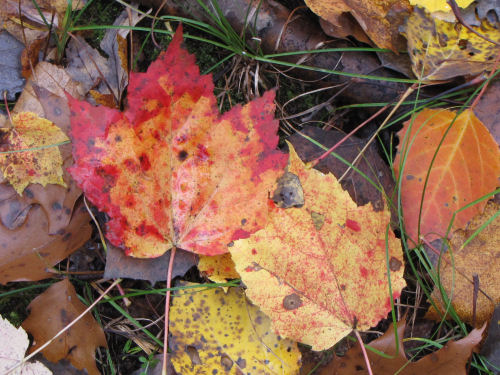 That made the day.

Maybe Mom should have followed your nose Maggie.

well at least your mom is good at figuring out how to get back to where she's going. I probably would have walked around in circles forever

rainfield- I often wonder if Maggie could really find her way back to the car. She seems to have a good nose.

Ann- there was a road in every direction without going for miles and miles. I would have hit one in any direction very soon.

I hate when that happens.