I'm not a fan of ruffles, unless it's these kinds. The first one is a liverwort. Liverworts are a biological oddity, in more ways than one! First of all, they are only one cell thick. Yes, each of those flabby "leaves" is like a bundle of twigs, with tall cells side by side. The "leaf" is called a thallus. It's more like a sperm or egg, because it only has half the genetic material of a liverwort. At some point little stalks will appear with a capsule on the top which has the full number of chromosomes. 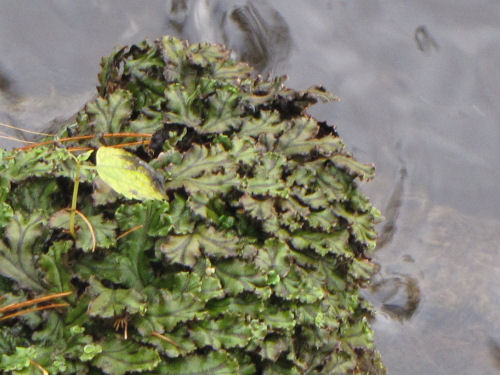 Next, we have orange ruffles. I don't know exactly what fungus this is- probably a polypore. I'll just stop rather than spouting misinformation. 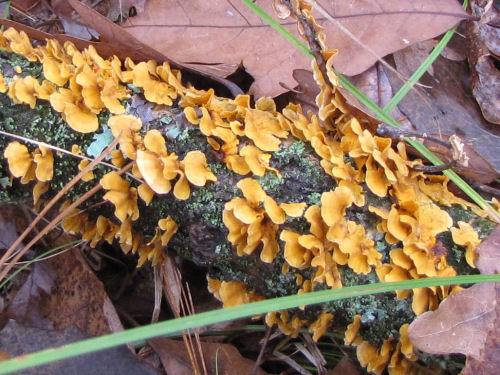 Finally, I do know what this one is. It's violet-toothed polypore, most recently named Trichaptum biforme. It's really a polypore, but looks like a tooth fungus- hence the "biforme." It starts out bright purple, but quickly fades to this deeper purple and then brown to white. 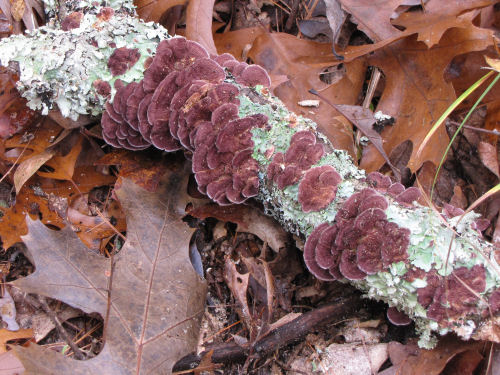 Can't see the teeth? Let me help you. 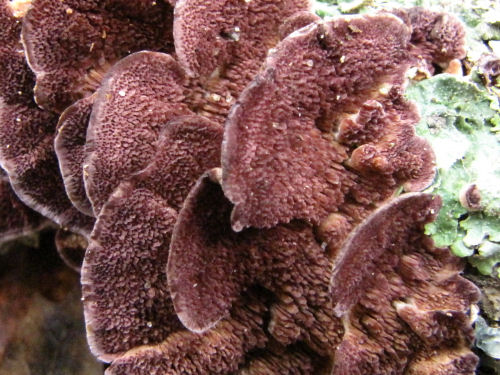 Love fungi! Really love the shot of the orange ruffles.

Are they edible? Crikey! What a coincidence. The word verification spells dedly!

And here all along I though Ruffles had ridges not teeth.(well that's what the chip commercial told me any way)

Never loved ruffles (esp on dresses) as a kid, but they're growing on me now and the kind on fungi is definitely fascinating :)

Very interesting story about the wort. You are teaching me something new nearly every day. Thanks!

reena- they are very fancy, but I wish I knew what kind they are.

John- the violet one- no, since I can't ID the other, no clue

Ann- you know better than to believe a commercial!

Ivy- yeah, me neither. Funny how they are acceptable some places and not others, but that's how my brain works.

moirai- you are in the right place for ruffles in the forest.

Ferd- the world is full of the weird and wonderful

Chuck- I knew the liverwort fact, but I do keep trying to teach myself something new all the time too!

All this is new stuff for me, Joan. I don't spend any time in the woods but I love learning a little something from you.