A Pancake and Goof-Off Day


Om and I Goofed Off today. That began with a pancake brunch. We are something like pancake snobs. I guess we are actual pancake snobs. We really only like the ones I make from my mother's recipe. I make them from scratch and we like them thin. 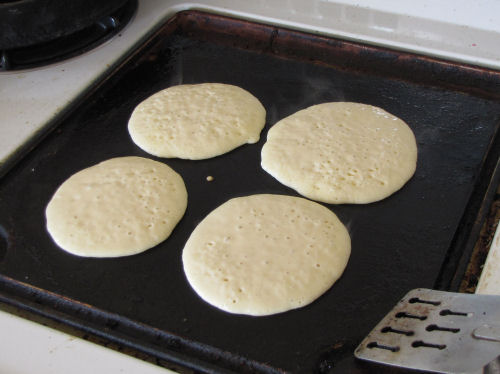 They cook up golden brown and smooth. Shall I also mention that I really like my really old stove? I like the griddle in the center (it can also be changed out for a large burner for canning). The griddle doesn't get used as much as it did when we had boys at home, but I still find it very handy. 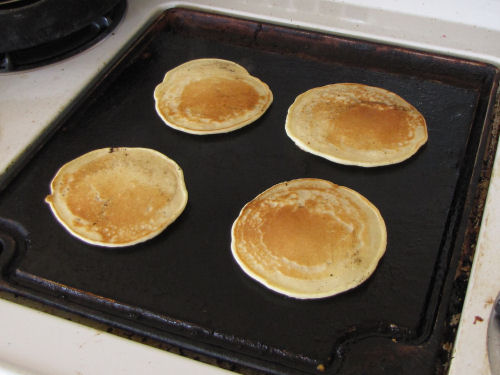 Here's the other thing about pancakes at our house. Now that it's just "us," whenever we do pancakes or waffles we never sit down to eat them. We stand in the kitchen, get all the stuff ready (Om like his syrup warmed up), and just eat them as soon as they come off the griddle. Om likes ordinary store syrup. My stack has elderberry syrup- a gift from Ester. 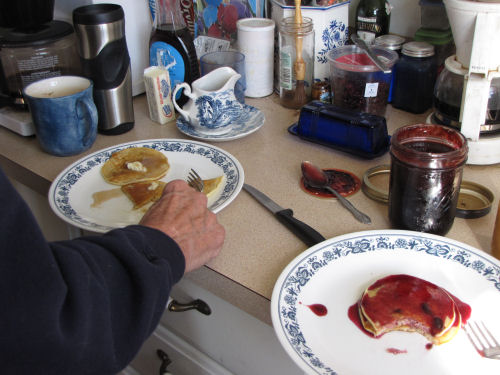 We had six pancakes each. I had dandelion syrup on my second stack. I don't know if I could choose a favorite between those two flavors. Since both of us are trying to eat less, pancakes are a special treat. Does someone look happy? 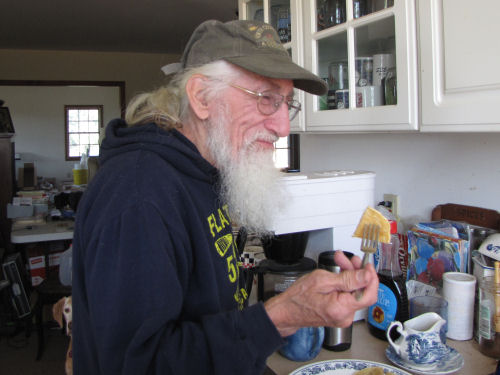 Does someone look unhappy? 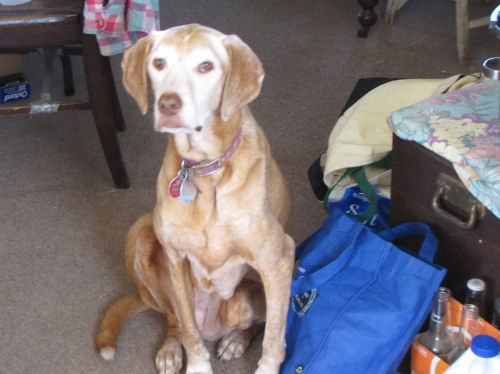 Don't worry, we gave her a little treat. She's always worried about her stomach.

Then we watched two movies. I picked them somewhat randomly, but they were both pretty good (if you like that genre- which we do).

First we watched Frantic, a Harrison Ford movie. He and his wife travel to Paris, and due to a luggage mixup, his wife is kidnapped and he and the smuggler hunt through the city for the wife. I expected this to be one of Ford's mediocre movies, but it was very good.

Our second feature was An Eye for and Eye, with Sally Field and Keifer Sutherland. Sutherland is the bad guy (he does those so well), who kills Field's daughter. He is allowed to go free and Field seeks justice.

Not a bad day of goofing off for a little cooking and $1.50 in movie rentals.

The pancakes look great! Our cat is quite the little beggar, too, and her efforts are usually rewarded.

Those pancakes do look great. A lot like mom used to make. Yes, Om looks happy. Yes, Maggie looks unhappy--or is it just concern about being left out? Midnight seems to be thinking a lot about his tummy too.

Oh darn, I shouldn't have looked at your blog. Now I want pancakes! Life was just fine without pancakes a few minutes ago, now there is a gaping hole in my life the size of a couple of pancakes.

that sounds like a great way to spend a day. The pancakes look really good. We have them sometimes for dinner. Wish we had a griddle like that.

What is the deal with standing??! That's funny.

Poor Maggie--no pancakes for her??

We have an old griddle like that--we take it camping and on vacation too. You just HAVE to make pancakes on that or they don't taste right.

i am a pancake snob too except those i cook and homemade, would sure love to try your yummy pancakes. are you all excited to eat your pancakes that you can't wait to be seated, and as soon as it is off from the pan, you eat it? sounds fun!

Hi random- thanks for stopping by! She's not really much of a beggar, and we try not to give her people food, but she got a little treat in her dish.

Chuck- maybe it's the fall instinct to fatten up

Jaya- honored to be the cause of your new unrest! Thanks for stopping by

Ann- We never have them for actual breakfast- we can't eat enough to bother at that time of day.

Lin- just faster that way... a great many of my meals have been eaten standing over the sink.

betchai- excited- that must be it. I don't really know... it's just what we do. I'm usually flitting between to stove and the plates, and Om just stands.

What terrific pictures of Om ( and,
yes, he does look VERY happy ) and Maggie. I like pancakes but it is a rarity to have them...usually at a pancake restaurant. I like buttermilk pancakes - or buckwheat. And my favorite syrup is THICK, pure cane syrup like the mules used to be used to produce in Georgia when I was growing up. We also used to smash it with butter to put on biscuits when I was small!

yummy! Mine would never look that light and delicious. Eating them right off the griddle is a great idea. Now I am going to want some tomorrow for Breakfast.

Carmen- buckwheat pancakes are good too, but they are a totally different texture from these.

Loretta- Next time you come, either pancakes or waffles- your choice!