I had a little time to kill after doing errands till I clocked in at work. I walked a mile-long loop at the Ludington State Park that goes on both sides of the Big Sable River. You've seen sections upstream and downstream in other posts. This was a very tame, paved walk, but it met my time requirement, and kept me out of the mud. With four days of rain we now have serious mud! 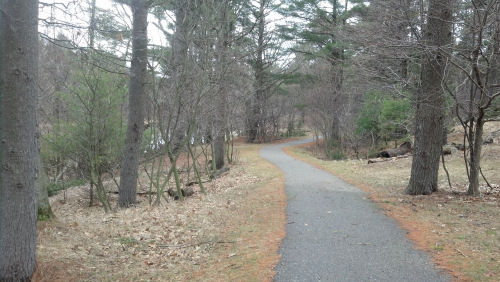 These pictures were taken with my phone. It's not bad, but doesn't seem to have the clarity of the camera. Plus... it was raining! This is the view downstream. Follow this for another 3/4 mile and you will come to the Big Sable outlet into Lake Michigan. On the far bank are some reddish trees. Those are Speckled Alder, like the ones I showed you last week. 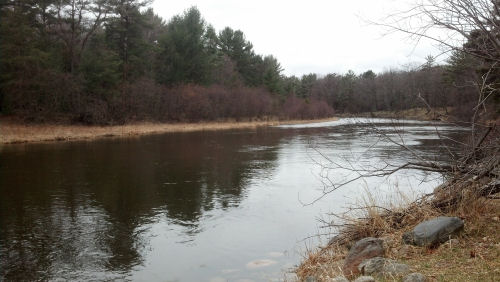 There are interpretive signs along the walkway. There used to be a small village known as Hamlin along this section. Thus, the names Hamlin Lake and Hamlin Dam. It was established in the 1850s when the first dam was built. The interpretive sign here explains that the river was much different then. It was narrow and fast, perfect to power a mill, which was why the dam was built, and the village grew up. There was a dam break and bad washout in 1888, from which the village partially recovered. However, in 1912 there was a full dam failure, and the village was completely wiped out. The river was also changed to become the wider, slower one seen here. The log pilings along the edge here were put in by the CCC in the 1930s to help prevent erosion. 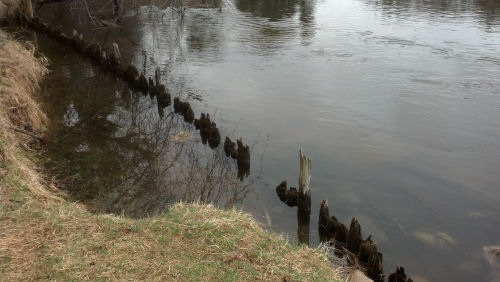 Here's the current Hamlin Dam. It was just rebuilt a few years ago (under controlled conditions which did not empty the lake). It's always amazed me what a small dam creates the huge lake. I've shown you lots of pictures of the lake, and it's the one I swam across in 2011. Here's a link to the Hamlin Lake Map. The dam is at point 3. 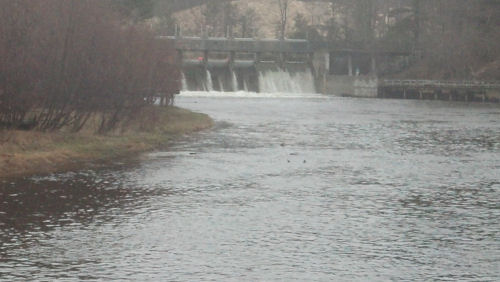 Even in the rain and wind there was something of beauty. The wind riffled the surface of the water, making sections of texture and lighter color. If I'd had more time I could have just watched that for quite a while. 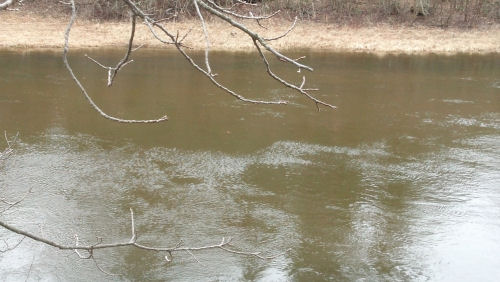 And at work, the lady who really knows how the machine works took time to show me the right way to set up runs. I like it that she seems to trust me, and she's going to be the boss tomorrow too (she's not usually there on Fridays), so I'll get to work with her even more.

The day may not have been pleasant, but the walk more than compensated. At least it seems that way to me.

you found a nice way to kill some time.

Ann- I almost didn't do it. Then I realized, "what was I thinking?"