As Good as the Memories?


I grew up 20 miles from Ithaca, New York. That was a significant distance to travel in the 1950s. We went there about once a month for shopping that couldn't be accomplished in the tiny town that was only two miles away.

My favorite thing about the shopping trips was going to Rothchild's Department Store. I never cared about the actual shopping. What I liked was the pneumatic tubes that handled money. Some bank drive-throughs still use these. The cashier would put your money or check in a cylinder, then close the end and place the cylinder in a clear tube through a little door. There would be a vaccuum-y noise and the cylinder would shoot up the tube to disappear into the ceiling. A minute later your change and receipt would woosh back down, and be handed to you.

Woolworth's was usually on the list of destinations too, as I recall.

My next-favorite thing was eating at the Home Dairy after we finished all the errands. I found a picture of the building on line (I've stolen it from an Ithaca High School reunion page). They closed forever in the 1960s. when the founder, Robert Avery, died in 1997. 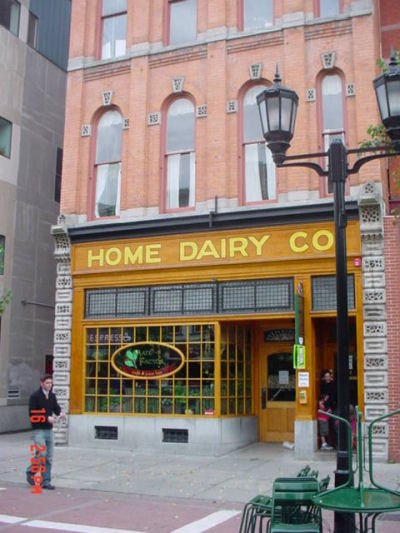 The restaurant was all cafeteria style. You picked up a tray and walked around selecting servings of things you wanted to eat. I think I recall that you could eat a whole meal for under a dollar- when I was small, anyway.

I remember two of their offerings. They had a creamy macaroni and cheese. It wasn't baked with a crunchy top (which I like best), but this was made with some kind of white cheese and was all soft.

The must-have item, however, was a half-moon cookie for dessert. This memory all came rushing back when the historical society posted the authentic recipe for these cookies. I had to try it. 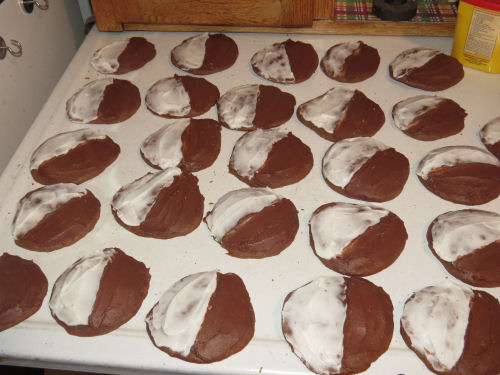 It took me a couple of tries to get the size the same- about four inches across . I thought they weren't right when they came out of the oven. The cookies were crisp, not soft like I remembered. But the next morning they were soft and chewy- the texture was just right. Somehow in my memory the circles were more perfect. Perhaps my memory is faulty, or they had a pan that was recessed with exact circles, because some of mine are really round and others aren't. A restaurant would need near 100% perfection to serve them.

Got them frosted, and I have to say they really are just as good as the memories. I admit the "half-moon" part is basically a gimmick. It's just a frosted chocolate cookie, right? But sometimes that little tiny bit of extra effort that made everyone remember Half Moon Cookies is all it takes.

Here's the recipe as posted. I made my own frosting with a little Crisco, 10X sugar, and milk. 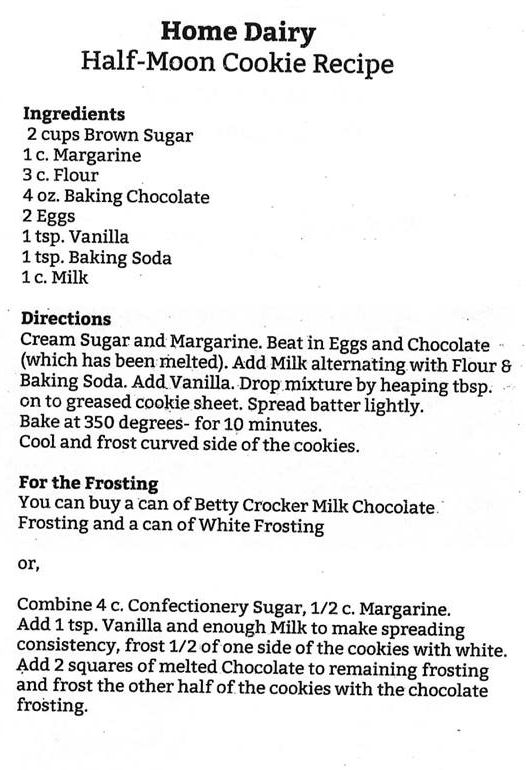 In other news: I've been editing all day. Hard brain work.

I remember those pneumatic tubes in the big Eton's store in my hometown as a child. It fascinated me.

Normally when I eat something that I fondly remember from childhood it never tastes as good as I remember it.

I remember seeing those tubes in a department store in Lansing, Michigan when I was a kid. I don't remember which one. They were super neat.

Foods from childhood does not bring back memories of restaurant food. However, every time I enjoy a BLT or a bowl of pea soup with ham, I have fond memories of my mother.

hello sharkbytes its dennis the vizsla dog hay my dada sez that wile we wer running away frum the fire up in the mithikal sitty of anaheim they stoppd by a bakery ware they wer selling blak and wite cookies!!! but he sed nope those ar not haff moons!!! picky picky picky dada!!! ok bye