Today was the Christmas party at work, and we nailed it! But you already know we are good at that. We lined up three piles of pallets to make a "table," and had pretty plastic tablecloths. Add pizza and lots of finger foods. We all ate till we could truly eat no more!

My contribution to the finger foods was a really easy relish tray. It looked great, but was immensely simpler to create than the penguins made in a previous December. 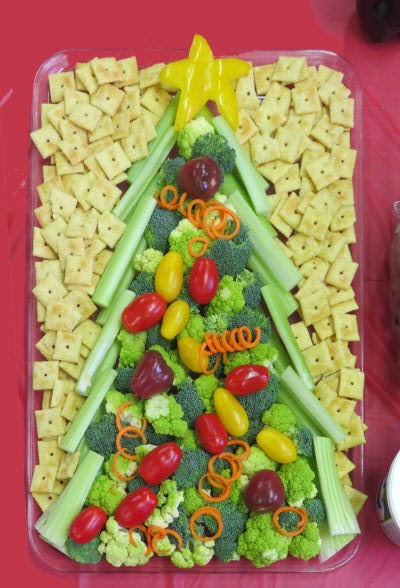 The gift exchange was fun. We each drew names, and the strangest thing is that it turned out to be four sets. For example, I drew Heather and she drew me, and ditto three other times. Of course we didn't know this had happened until today. The rule this year was the the gifts had to be homemade.

Heather takes some of the strapping bands that come on pallets of inserts and other shipments and weaves baskets. Here's the one she made for me as a gift. And, yes, it's filled with cookies... dark chocolate and craisin. Mmmmmm... 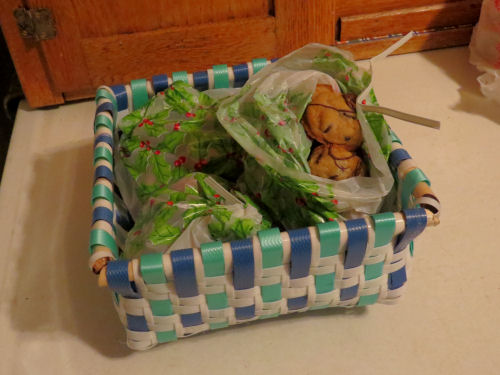 Here's where it gets funny. The day we drew names, I was planning in my head what crafty thing I would make. Then Heather grabbed me and said, "You need to know that books count as homemade, and whoever you get (except Michelle, who already bought the books), wants a set for their gift."

So when I actually got Heather, that was the end of craft planning! All I had to do was wrap up a set of books.

And we finally remembered to take a nice group picture with all the current employees in the Mailroom. We work well together, and "the people" is one of the best things about this job. 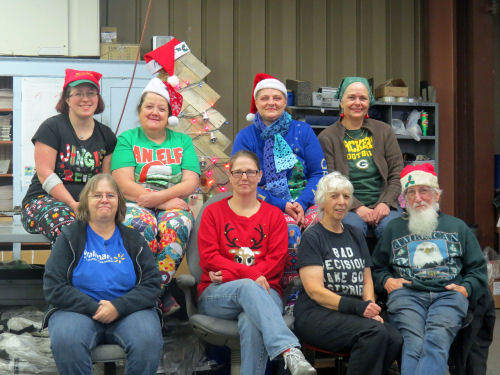 In other news: I am getting back to the first of the children's mystery books. I'm really stuck on Chapter 10. I think it should contain certain information, but every time I try to write that, it just feels intrusive. I think I have to let the story happen in the way that feels right, and get this info in later. I'm sure I'll sort it out, but it's being surprisingly stubborn.

We managed to do three runs of actual publications, in addition to the party, so we only have two to do tonight. I don't go in till 11 pm, an hour later than usual. And I get Tuesday after Christmas off, so there will be a nice break after work and sleep.

Cute basket! ...and Heather will have fun books to read on Christmas while you eat her cookie! Your team does look like they know how to have fun in spite of their tough job!

I don't know why, but the first picture made me think of my first Christmas party at work. All we did was drink at that one. It was the only time in my life I have ever been drunk. It didn't take much. And I was really only drunk just enough to make me seem a little more cheerful. I'm the only one who didn't notice the difference.

Oh I remember those penguins, they were so cute but this years relish tray is quite impressive looking.
What are the odd on the name picking turning out like that. Your basket is pretty clever and of course cookies always make a good gift

hello sharkbytes its dennis the vizsla dog hay that veddjie tree is verry pritty!!! altho dada sez he wood probly go for the cookeez first!!! mary krismas to yoo frum all of us!!! ok bye