This is the continuation of starting to create templates for the interior braces in the trailer.

I decided I needed to go one step beyond cardboard and make these out of scrap plywood before cutting into a good new sheet. That turned out to be an excellent plan, saving me headaches later. Pictured below is the first section I did, that spans the entire ceiling, about centered on the door, where there will be a partial wall on the opposite side. 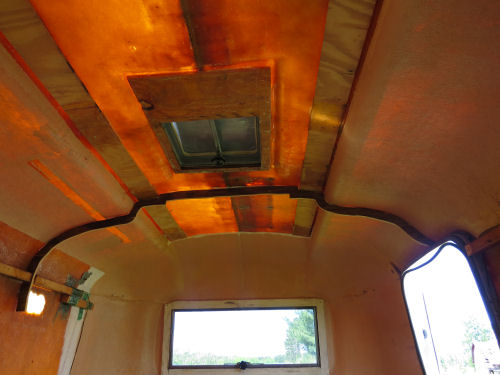 I had to do it in two pieces, because to make it as one won't fit on a single sheet of plywood, but it's still going to be plenty sturdy. Here's the upright coming down the side opposite the door. Don't get confused by all those colors and shapes. I still have fiberglass repair to do, and the previous owner had toggled a number of things up and used a couple of kinds of paint. And remember, these are just templates, the real braces are going to be doubled 3/4 inch plywood. 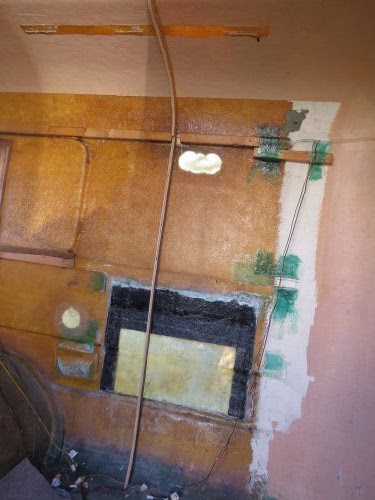 Here's the ceiling piece after I cut it out of the junk plywood. 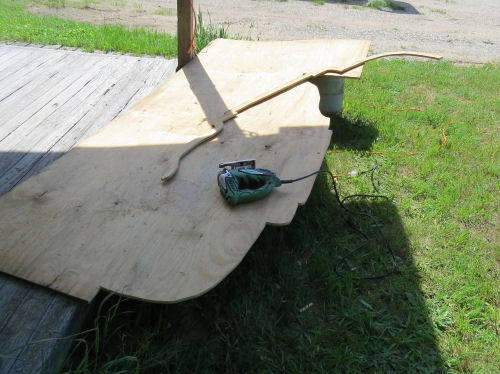 The really difficult brace goes up beside the door and then goes across the ceiling as far as the vent. This one could be made in one piece. It will also support a partial wall (and the walls, of course, also give support to the fiberglass). It took me three tries to get this one right. Just for kicks, here's what it looks like lying in the grass. But those three tries are why I'm glad I'm doing it with some free stuff first.

Here's that piece fit into place, running up the outside wall near the door. 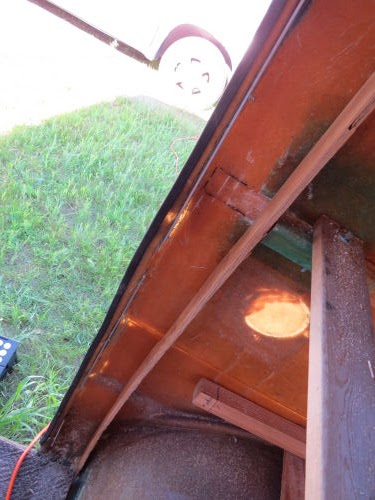 And across the ceiling. 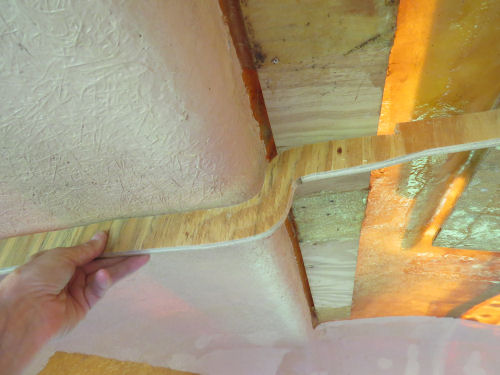 The other thing I did today was determine that this weird canvas edging around the door frame is not needed. Apparently this is the remains of an original canvas-edged screen door that long ago ripped and someone carelessly cut the canvas away, but not close to the aluminum backing. 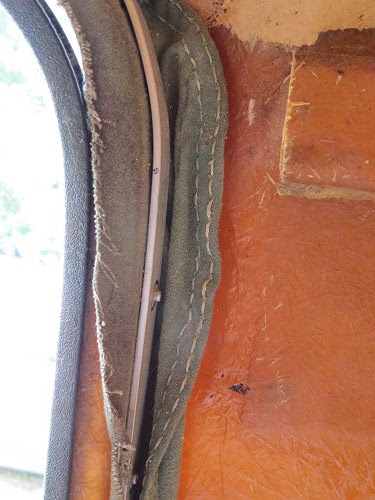 So, that's now removed, at least well enough to not impede what I'm doing. Any remnants will be hidden. 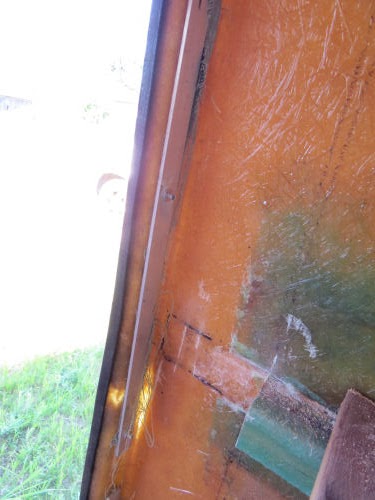 And I pulled the threshold up and took the remains of same canvas door out from under it. It's actually sewed to the aluminum! I'll need to spend some time cutting that out, but I can do that later. 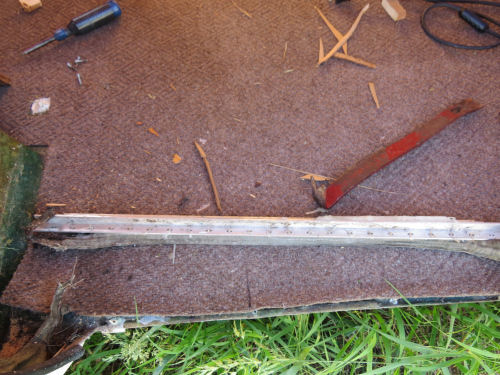 I'm almost ready to borrow a truck and bring home new plywood, insulation and stuff. I do have to patch a couple of holes in the floor before I do much more on the interior, because the flooring needs to go down, but I can put these braces in.

I didn't count the day I brought the piece of plywood up from the barn. That was pretty much a project in itself- big job to fight it out from behind a bunch of stuff and not fall through the floor. But I won't give it the satisfaction of counting as a day.

In other news: no writing on the book happened. I couldn't get to sleep last night because I realized I have to get the lights for the trailer before I can put in the insulation, because I need to know what kind of bracing they require, and do wiring for any that aren't battery powered. I got back up and looked at a bunch of light options, and basically don't like hardly any of them, but I'll have to choose. So much to think about! However I did write in the afternoon because I had stuff to turn in for North Star on a deadline. And then I worked on the trailer despite the miserable humidity.

You did great at making that brace to fit across the ceiling.