I did a roadwalk around the section that was so blocked from the other day. From then on, for the rest of the day I had clear trail! 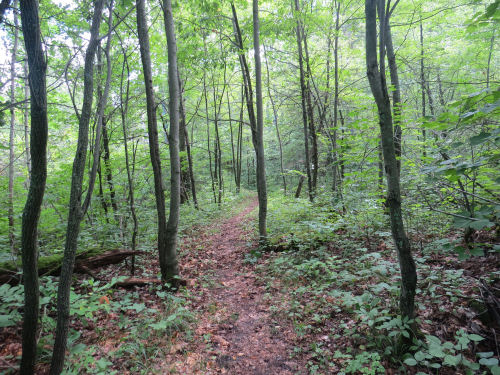 That picture above is also a small part of the Nichols-Chisholm Railroad grade. This was a local logging railroad that was unusual in that it did not connect with any other rail line. It was used to haul timber out of the woods to the Otter Tail River, where it was floated to a mill at Frazee. In its heyday, it employed 500 men. 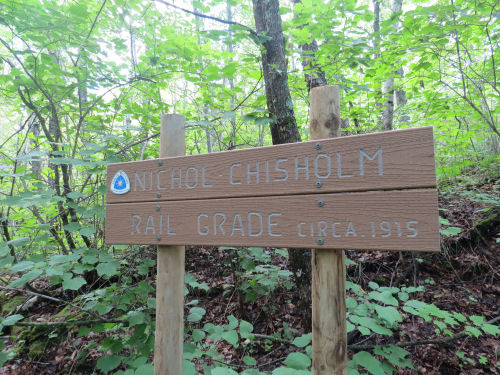 This is a lobster mushroom, which isn't a mushroom at all. It is a fungus that parasitizes other mushrooms. It alters their form, color and chemistry. It often attacks poisonous Russula mushrooms, but the resulting lobster mushroom is edible! That said, I have never tried one. People who do eat them say they are choice. 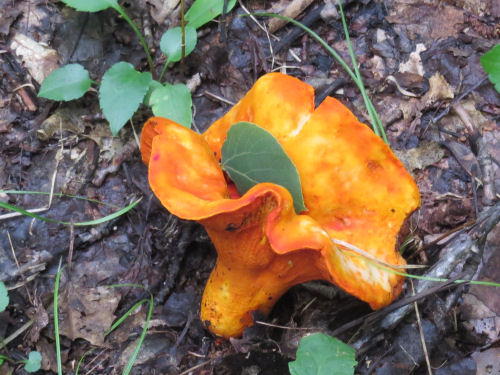 The big news of the day was mosquitoes. Today was right up there in the top 4 worst mosquito experiences ever. It's hard to rank them, because there are other factors such as temperature, length of hike, etc. But from newest to oldest the bad ones are: today, Adirondacks 2022, Hiawatha NF 2009, and Chippewa NF 1997. (That's two in Minnesota for a win by the "state bird.")

Let's talk about today. If I stopped or slowed, they just swarmed on my clothes, attempting (and succeeding) in drilling through them, even my pants. I managed to cram down part of my lunch, but then I just had to start moving because I couldn't stand it.

This picture didn't focus, but I think you can get the idea, and I sure wasn't going to take the time to get a better picture. As I walked, the folds in my shirt sleeve filled with 15-20 mosquitoes every couple of minutes. I would do a mass murder event by wiping down my sleeve. Then we would start over. 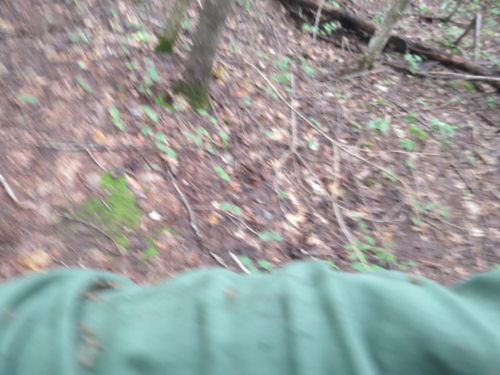 After I ate lunch, I decided I couldn't even stand to have my hands exposed. However, I've had no luck finding some lightweight gloves that aren't huge. I wore the winter gloves in the Adirondacks, but they are knit and the skeeters just bit right through them. I did have two gallon zipper plastic bags, and I put those on and snugged the zippers around my wrists over the shirt cuffs. My hands were slimy-sweaty the rest of the day, but they were not being bitten.

When I got to the car and took off the bags and the long-sleeved shirt, my wrists and hands (from when they were exposed) were swollen from all the bites. They are back to normal now.

I stopped at a store on the way back to the trailer to get some groceries, and I said, "I am not leaving here without some kind of gloves." So, I have something. They aren't perfect, but they are going to be better than plastic bags.

It would be 100% OK with me if the mosquito population died off a bit. It's nearly the end of August!

Posted by Sharkbytes at 9:58 PM

That sounds like a miserable day with the mosquitos. I don't know if they still sell it but there used to be an Avon product that worked really well. A guy who was in the reserves always took some with him whenever he had to go anywhere. I think it was skin so soft but not positive

Ann- yeah that was it, but I never thought it worked so well

Lulu: "Our Dada says this post is making him itch!!!"