You might remember that yesterday ended with us going to bed in a thunderstorm. The rain ended during the night, but you know what the late rain means, right? We got completely soaked again. We kept trying to feel positive about the fact that it also kept us cool, but, well... after a few days, it's just icky.

Our goal was to make it to the Kekekabic East Trailhead on Gunflint Trail (road). Several of the small lakes we passed are wide places in the Chub River. Where the trail crosses the river, there is no bridge, but the rocks are pretty easy. 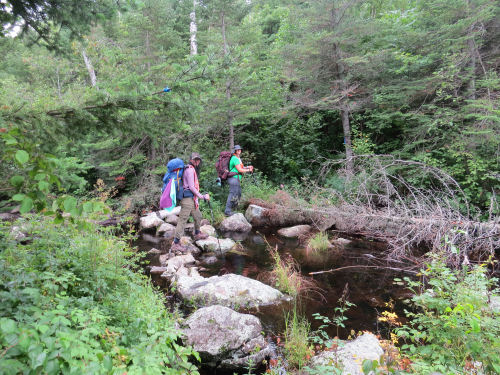 Speaking of rocks, I can only assume that these boulder fields are glacial dumps. We crossed a few, saw several more. This one is memorable, because at this very spot in 2009 we came face to face with another group of NCT folks who were backpacking from the other direction. It was a momentous occasion (story told more fully in North Country Quest). 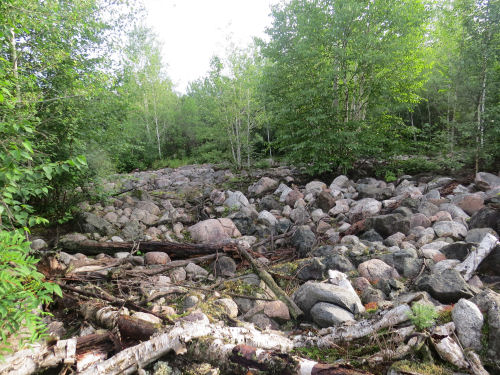 As the day went on, the weather got pretty nice. We took a rest break at Fay Lake and enjoyed the blue water. We also saw a beaver, but the pictures are only good enough to prove we saw it- not really worth looking at. 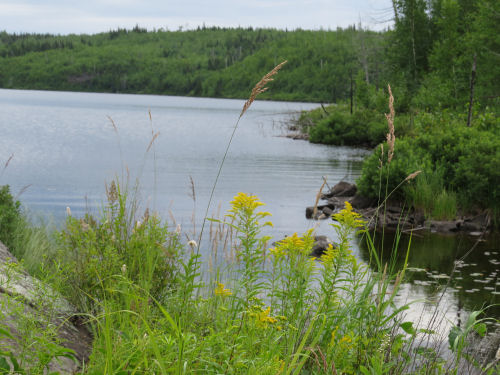 At Bingshick Lake, the west campsite is on bare rock. We enjoyed being able to sit down without fighting the shrubbery. We were dry by now (except our feet). The sky was gorgeous. We all agreed that we were glad we had not tried to make it here the day before. We ate assorted selections of foods for lunch. We all had plenty of stuff, it just wasn't necessarily labeled as lunch items.

After that, there were four+ more miles. There were things to see, providing satisfying markers of progress. First, we left the Boundary Waters Canoe Area Wilderness. 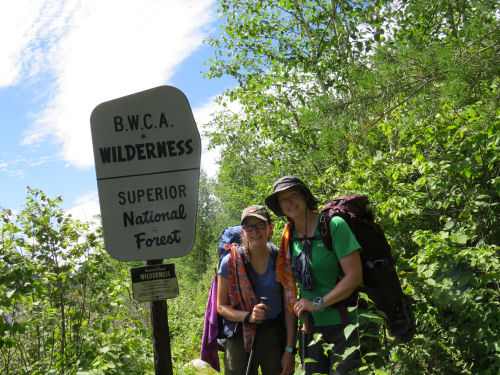 Mine Lake is about a mile long, and narrow. We were glad the trail has been re-routed farther up the hill instead of down in the wetlands by the edge.

Somewhere here, with about 3 miles to go, Monica had enough of a signal that we were able to call Gunflint Outfitters and secure a shuttle, and one of the rooms in the bunkhouse. These arrangements really cheered us. We knew we had a place to sleep, and we knew we didn't have to walk an extra four road miles to get to there.

The next notable landmark is the remains of the Paulson Mine opening, dated 1893. (Yes, there is a railing) 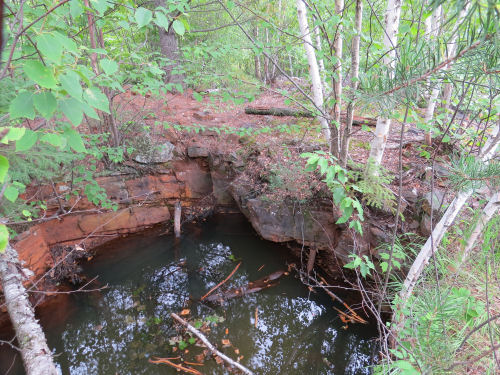 After that, we knew the trail would be easier, because there was a railroad that serviced the mine. Not that the trail was a rail trail, but the last mile was not hilly.

There is also a new loop trail called the Centennial Trail that follows the route of the Port Arthur, Duluth, and Western Railroad. It was so marginal and so short-lived, it was quickly named the Poverty, Anguish, Despair and Want line. If I'm remembering correctly, the Paulson Mine did not produce enough ore to quite pay for digging it and putting in the railroad.

We reached the trailhead about 30 seconds before our shuttle ride. The driver snapped a picture for us. 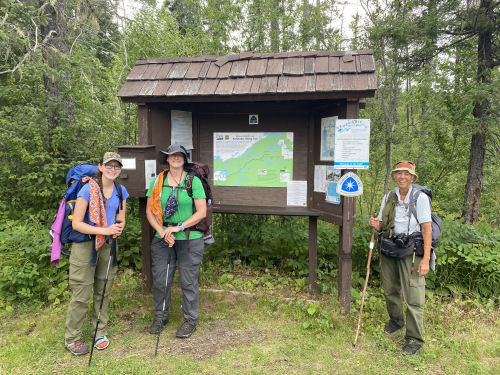 In no time at all we were fixed up with a room in the bunkhouse. 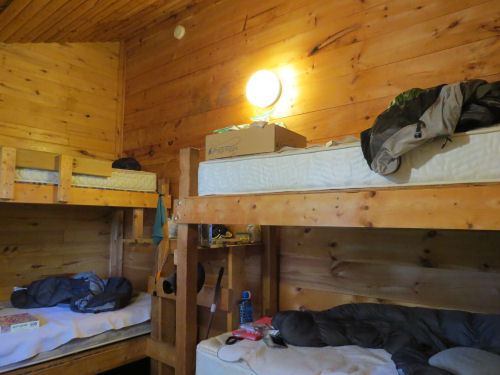 Gunflint has high end lodging for regular guests, but they also provide for the needs of hikers and paddlers. The bunkhouse is great for such users. There is also a showerhouse, which was our next stop.

And they don't shun those of us who haven't brought our fancy clothes. We are all welcome to buy meals at the restaurant. We ate all we wanted that night! Monica had walleye, Keira had the Minnesota hotdish, and I had Justine's meatloaf. (There's a story behind that name, maybe I'll tell more on another catch-up day.) 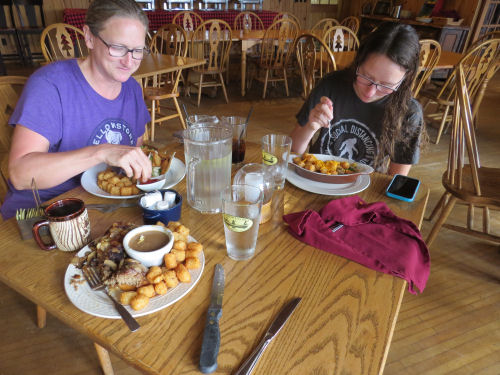 Meanwhile, Barb from Heston's brought our supply box to us. She volunteered to take Monica to get her car the next day, so we went to bed having most of our problems solved. We breathed huge sighs of relief and talked about our Kek experience. I was highly encouraged to learn that my poor planning had not soured my friends on backpacking. In fact, they are already talking about when they might be able to come back to do the Border Route. That won't happen on my timeline, but I'm just happy they are glad we did this, despite the challenges.

Hi Joan, The ore from the Paulson mine was of high iron content. It was also magnetic and clung to the crusher, making processing it impossible. It's hard to believe that there was once a Gunflint City, on the north side of the lake, that had a considerable population for a season.

You'll be hiking the Border Route section past Clearwater lake soon. I was on the crew that cleared the tornado damage and would be interested in hearing how the trail has grown in over the summer.
Dan D. JV45