Apparently I have reached an age where I have developed limits to the misery I am willing to endure, or perhaps common sense. Miles hiked today, less than one. In both directions.

For starters, I had to stay in town to do some errands after the P.O. and the drugstore opened since I've tried unsuccessfully for two days to get back here early enough in the afternoon to do these tasks. So I planned to start later and do a shorter day.

Michelle dropped me off just before 11 am, and it was raining. Sigh. I put on my poncho and started hiking. But it was raining hard, with thunder and lightning. This section of the trail had not been cleared yet after the big windstorm. I made under a mile of progress in a half hour. The poncho was probably going to be torn to shreds from catching on branches. I might as well have taken it off since I was pretty much soaked anyway from climbing through downed trees. There were a thousand mosquitoes dancing on my eyelids and possibly trying to dry their wings in the warm breath from my nostrils (why else were they lighting between my nose and lip- very strange), and I didn't think adding a head net to that costume was going to improve my already limited ability to see what I was doing.

Even though I had planned only 11 miles, at the rate I was going, it was going to take me at least 6 hours. I called Michelle to come back and pick me up. We went out to lunch. I'll road walk around this section.

So I came back to the trailer and contemplated the meaning of nothing for the day.

Let me say that I don't want to give the local chapter a bed reputation. There was a terrible wind storm here earlier this year and they have been working hard to open the trail. I know they spent 27 person-hours clearing 1 (yes, one) mile of trail south of here. They just don't have enough volunteers. It was obvious that a lot of hard work had been done on some of the sections that were lined with the remains of fallen trees.

Enjoy a few extra pictures from the last few days. Here is daddy Trumpeter Swan. He's giving me the evil eye because mom and the babies were nearby. 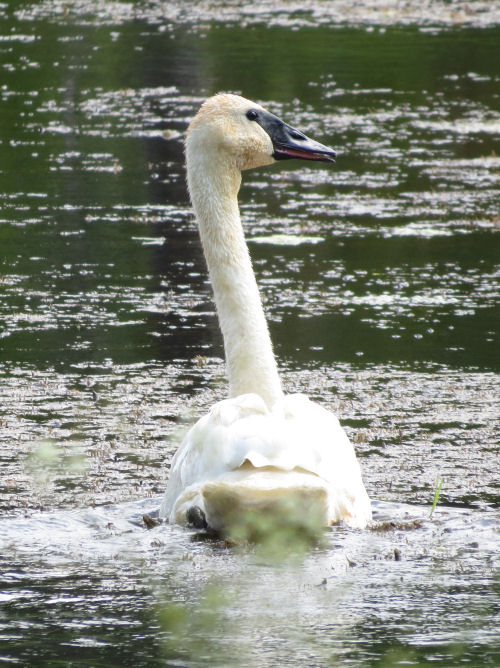 This is a Northern Tooth Fungus, sometimes called Stacked Hydnum. 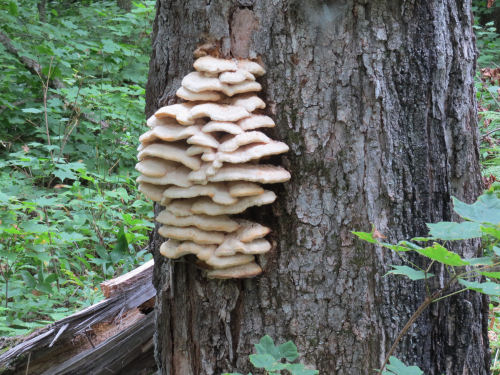 A lovely dragonfly pose. What's really interesting is that the shadows make it look as if it has eight wings! It's some kind of Mosaic Darner. The book says it's nearly impossible to ID them precisely in the field, and certainly not without a side view. I can tell you it's female (abdominal appendages). 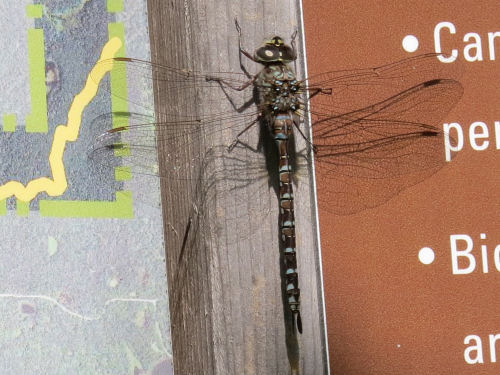 Finally, the sumac is starting to remind us that autumn is coming. 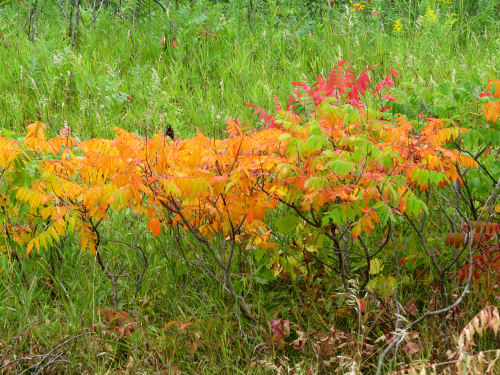 So, I didn't hike today, and tomorrow is not looking good either. Forecast says 75% chance of thunderstorms all day. Not a fan of hiking in lightning on a road. I'll be moving the trailer. The rest days are nice, but I can't help but think that each day off increases my liklihood of hiking in real snow to finish this trek.

Posted by Sharkbytes at 9:48 PM

Oh that does sound miserable. You probably lasted longer out there than I would have though.

Ann- I should have never left the car, but we had driven all that way. I was pretty willing to keep going until I had to climb through two really messy trees and then was going to have to hunt to find the trail.