I bring you a legend for Halloween. Nah... I don't like Halloween very much, but I did see this fungus yesterday, and its common name is black witch's butter. It's Exida nigricans.

If you find some fungus on rotting limbs that looks like raisins on a stick, you've probably found it. 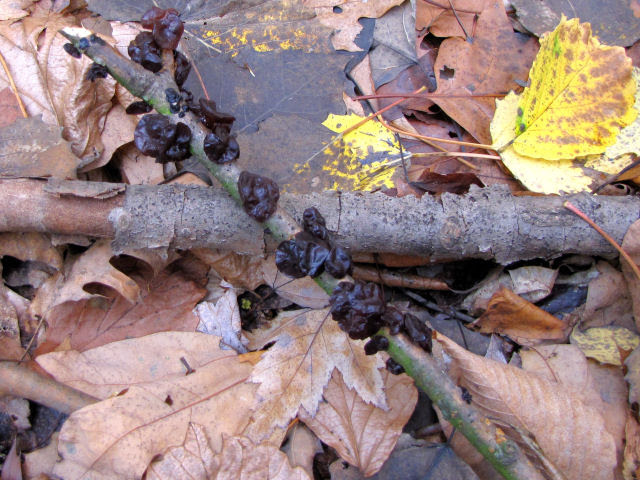 It's a jelly fungus. It looks slimy, but it's not, just soft and flabby. Actually, now that they do DNA testing it is turning out that the whole genus of Exida is artificial. That means it's only based on appearances, and doesn't have any validity at all. However, what's going to be done about it hasn't been settled yet. Remember, I'm not a fungus expert. I'm just telling you what I read.

I think the reason for its common name may interest you more. This fungus grows in all northern climates around the globe. The European legends say that witches would milk the cows at night and then spill globs of butter out of the pails. In Sweden, it is known as Troll smör with a similar story. 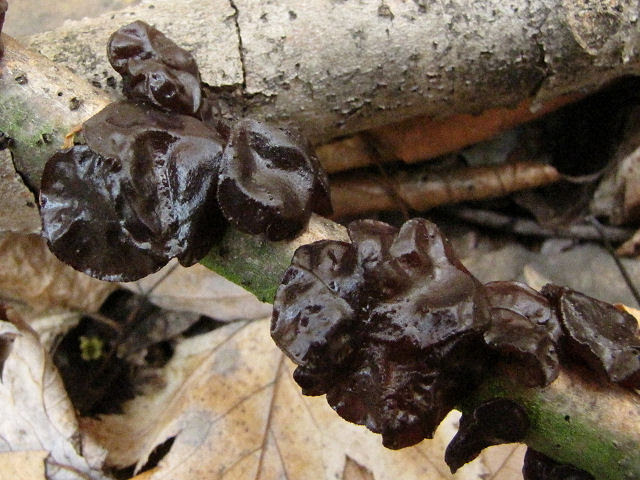 I am going to be extra busy this coming week. I have a lot of work assignments, web site work, and things to write. If you don't see me visiting your blogs, I'll get there soon. Thanks for your faithful reading!

Yes I've seen the look alike raisins on the stick.You take a photo of them so nicely.

Witches would milk the cows at night and then spill globs of butter out of the pails.

It really does look like raisins on a stick. I like the European legend, very fitting for this time of year

"Exida is artificial. That means it's only based on appearances, and doesn't have any validity at all."

So then, how did you get the intriguing photos?

Sounds like a busy week, but I guess it is good to have those work assignments, right?

they do look like raisins on a stick. are they edible?

Ann- I know... I didn't save it for this weekend. I really just found it on Friday.

Chuck- those would be scary ants! They are even rather hefty raisins

vanilla- they are imaginary? No... it's just that the fungi that have been grouped together because they look alike turn out to be not related, but no one has sorted out just which ones go with which yet

Dennis- Maggie says to tell you that it's something great for dogs to roll in.

Lin- It is... but I have so many this week that I will hardly have time to do anything else.

betchai- I think these ones are not. There is a similar one called "ears" that are, but I'm not expert enough to be positive of what I'm doing. I only eat ones that are really easy to be SURE of. Dying from having your liver dissolved by fungus enzymes is deterrent enough for me to be REALLY careful.

They look so unappetizing. I do love mushrooms, though, and I eat all sorts of bizarre things that would make one's toes curl.

Such a cool looking mushroom! I love jelly fungus.