Although I went to Dublin yesterday, I also went out back for a walk with Maggie. It was a calm, warm morning and lots of wildlife had been out. The snow had softened just enough to take good tracks.

I think we are in a good year for rabbits. There were a huge number of those tracks. That might not be so good for the bushes, but the snow hasn't been so deep that they are really gnawing them yet.

Here are some tracks I haven't shown you before, because I haven't found any that were good enough to picture before this. And now that I have them, I have to admit that I'm not positive if they were made by a vole or a deer mouse. But first, here's what they look like. 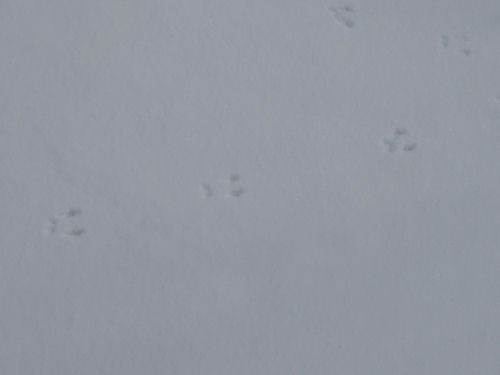 They look a lot like squirrel tracks, don't they? You'd be right if you said yes. This animal also hops when it runs, like the squirrel does. That's what leaves the parallel sets of front and hind feet side by side, and the large hind feet land in front of where the smaller front feet were on the previous "step."

But these tracks are a lot smaller than a squirrel. I managed to break the little ruler I'd been carrying to measure tracks, but I put a glove down for scale. 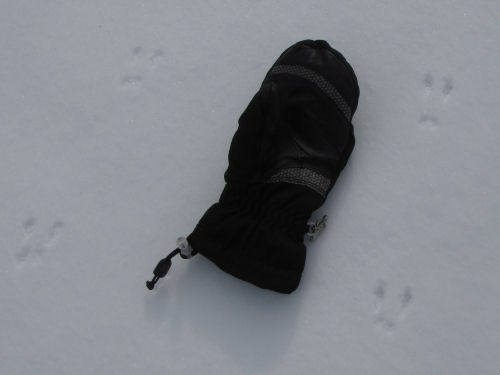 There is about 8 inches between each of those track sets! Also notice that there is no tail mark.

I spent some time with my track ID books, and had settled on this being a vole, but then another book said that it could be a deer mouse. Apparently deer mice don't drag their tails, and also make long leaps. Deer mice are adorable with large black eyes and white underparts. (Adorable unless they are in your pantry.)

Either of these critters are found here in abundance. I'm leaning toward vole because of the width of the track. Voles are slightly larger than mice. But in truth, I'm not good enough to tell for certain. One book says that a deer mouse has four toes on the front feet and five on the back. This was the clearest print I found. Can you tell? I can't. 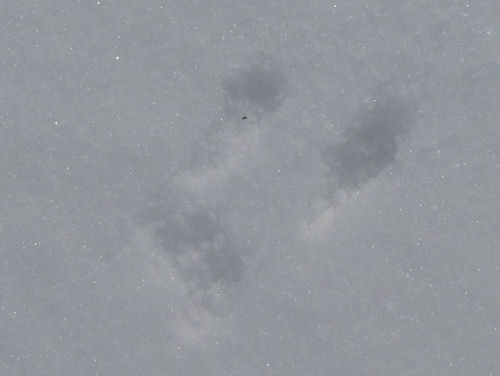 You are good at identifying this stuff. I have no clue and wouldn't know one from another

Ann- Oh, you could catch on if you saw them lots and practiced!