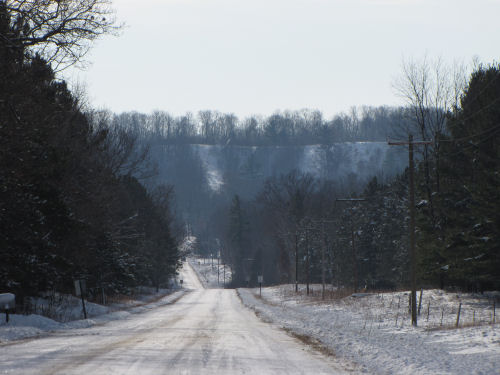 This is a picture I took yesterday. See those two clear streaks coming down the front of the facing hill? The one on the left is NOT a continuation of the road. The road jogs left to go through a valley and not over the hill.

Those open cuts are two of the ski runs at the former Ward Hills Ski Area. The only mystery is that I wasn't positive this was the correct location until last night when I found a web site dedicated to a lot of local history (most specifically Big Bass Lake, which I haven't mentioned very much). The web page is More on the Ward Hills Ski Area. The post is a little confusing because it also talks about Big M, which is not in the same place at all.

I've done several posts on Big M, and one other on Ward Hills. Here's a really long shot of the same hill as above taken in February 2011. 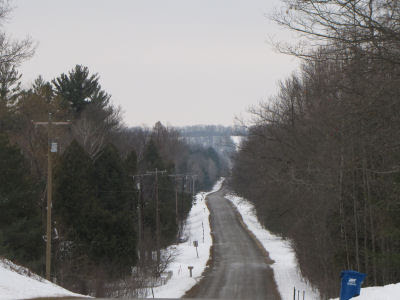 Ward Hills was always a small, family-friendly ski area. It only had a couple of rope tows. I remember the school took a bus load of kids every week in the winter with discounted prices. Our oldest (Sam- the one we don't hear from much) usually went. His only complaint was that the rope tow really chewed up gloves.

Serious skiers considered it a bit boring because the runs were short and straight, even if fairly steep.

But when it closed (in the early 1980s?) it was a real loss for people who are on low budgets because now the closest place for downhill skiing is Crystal Mountain, which is also lots more expensive.

There seems to be some sort of public lodge operating at the old Ward Hills site, but they haven't updated their Facebook page in over a year. Wouldn't it be great if they hosted an occasional ski event? Probably too many insurance issues for it to ever happen.

I'm not convinced that our modern, sanitized, homogenized, over protective and law-suit happy world is better than the one in which our parents lived.

I agree, of course. A little rough around the edges gives more character.

a nice view. A shame the ski area had to close. Hopefully the new lodge will be like it was in years past

It's a shame that smaller places like this cease to exist. But I guess if there is a no-snow winter they can't make it.