Finally, some snow! I got out the snowshoes and did about a mile. I'm out of shape! But it was such fun. 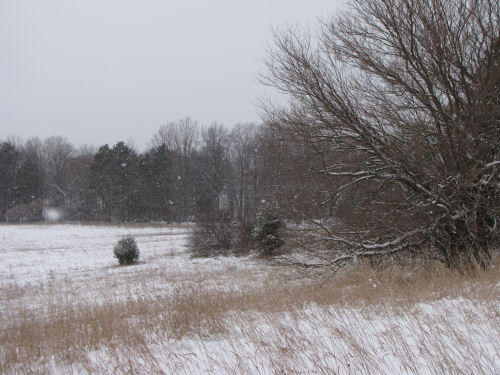 As for recognizing commenters, I got behind, and missed November, so I combined it with December. Here are the top commenters for the combined months.

There were 54 different people who left messages in these two months, and a total of 406 separate comments (not counting my own responses to them).

The top 10 commenters for Nov/Dec are:

Ann's Snap & Edit (Ann- 59 comments)- Ann really needs some competition!
Secondary Roads (Chuck- 55 comments)- Quiet days in the country, and Family Fridays
Carmen's Chronicles (Carmen- 33 comments)- Despite being in India, Carmen reads and catches up every few days.
Duck & Wheel with String (Lin- 32 comments)- Lin really gave Carmen a run for the money.
The Everyday Adventurer (Ratty- 29 comments)- look who's feeling better, and is now in Iowa.
My Journey (rainfield61- 27 comments)- he communes with the bugs and hills
Duxbury Ramblers (Carole- 22 comments)- botanizing and walking the dogs in the UK.
The Joys of Simple Life (betchai- 14 comments) great hikes in the US west, tied with
Don't Unplug Your Hub (John- 14 comments)- memories and life in the UK.
Snapshots as they Happen (Borris- 12 comments)- he has several blogs, but this one is travel and family.

The small banner in the sidebar for a month is just a tiny way to say thanks for sharing your thoughts. Anyone who comments here is in the running!

Wow, I didn't think I'd make the list this time, what with fighting mosquitoes, taking my life in my hands by braving Mumbai traffic and enjoying my adventures in India...but, to tell you the truth, Joan, your blog is one of my favorite ways to relax at the end of the day.

Glad to see I actually made it.

I'm not in a good shape too.

I got behind with commenting.

But the snow is good. It gives me a nice moral shake.

Hooray! I knew I'd get back on the list this time. We still don't have snow here, but I'm guessing it won't be long now. I'm getting used to the warmer weather though, so I'm not sure I want it to go away.

You make it easy to comment, Sharkey--you always have some fun adventure up your sleeve. :)

Didn't expect to grab the last seat. It's just so great to see me featured here in your blog again.

Thanks for the link. Do you count those manually or do you have an app for that?

Holy smokes, I came in first and I thought I was slacking....lol
You aren't the only one who's out of shape but I'm betting I'm much further out than you are :)

Carmen- I am honored to have you visit and comment- you bring a worldwide perspective.

rainfield- Hey, you made the list... not too shabby. Stalking spiders takes time.

Ratty- I'm glad... especially because it means you are feeling better.

borris- yup! you made time. I appreciate it

Chuck- you are always welcome. I count them manually. Some people have multiple logins, so I need to be able to recognize them as the same person (although I don't think that's true of any on this particular list)

I cannot figure out how to get people to comment on my blog, maybe I should put a top commenter page monthly on my blog too.