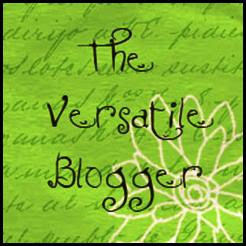 On January 10, Jean at Jean's Musings gave me the Versatile Blogger Award. It took me a while to "pick it up," but here it is. There are rules, of course, and I'm going to do some of them.

• Nominate 15 other bloggers (not likely)
• Inform my nominees (OK)
• Share 7 random facts about myself (hmmm...OK)
• Thank those who nominated me (thank you, Jean)
• Add a picture of the award to this post (done)

I will nominate a few other blogs, choosing to move outside of the circle of my most frequent commenters. I've given most of you several awards in the past:

Canadian Doomer a family trying to live in an extremely self-sufficient way.
Missing Moments where Reena tinkers with photos and writes poetry.
Along the Trail with Rochelle, who makes beautiful jewelry and takes wonderful nature pictures.
Some Assembly Required- John and I have a lot in common, although he does it all on a much larger scale than I do. Nevertheless I keep shaking my head over so many similarities.
String Too Short to Tie, because Vanilla's writings have become some some of my favorites, and he has been a frequent commenter, but I don't think I've ever given him an award.
Random Stream of Consciousness, where I've come to know John, whose hometown is just 40 miles from me.
Dickster's Random Thoughts, another blogger whose random thoughts appeal to me.
Right Where We Belong, because Karen and Gerard need something good to boost their spirits right now (Gerard and their dog Abby were attacked, Abby was hurt badly, and Gerard was bitten on the hand.)

I'll just close with snow on sumac branches- a typical image from my walk today. 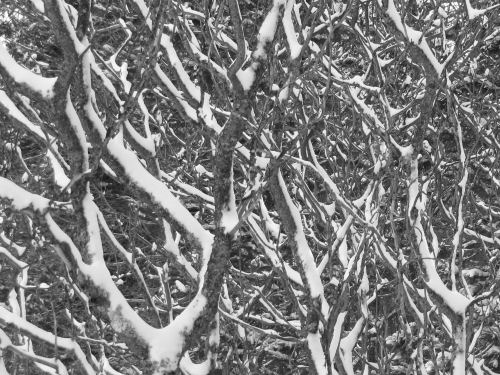 Oh, wait! I'm supposed to tell you seven random things about me.

Are you sure you don't know it all already?

1. I bought a complete set of Gilbert and Sullivan DVDs with Christmas money
2. I have been bitten by dogs three times in my life
3. I've been practicing Parade of the Wooden Soldiers (by Leon Jessel) on the keyboard
4. I'm wearing PJs with flying cows
5. I'd like to clean up my house, but it seems pretty hopeless
6. I don't like to talk on the telephone
7. I was insanely in love with horses as a child- took riding lessons, but never owned one.

I see so many deer with their antlers entangled with each other.

such a fun post! Especially love the idea of your cow pj's. And I too was insanely in love with horses as a kid, but we always had them on the farm. And thank you for the nomination.

I like your random info today. So, do you sing along with G & S??? I'm going to imagine you belting out show tunes while you hike in the snowy woods today. :)

Good choices for award recipients too. Some of my favorites. I sure hope Abby (Karen's dog) is going to be okay.

Thanks for the award--I added your link to our award page for this one because we have received it already.

That's sad you were bitten three times! Your PJs sound funny! I remember playing "Parade of the Wooden Soldiers" when I took piano lessons--it was kind of a fun one to play.

Gerard will be going back to work Monday, not sure when Abby will be coming home yet. She's drinking but hasn't eaten yet since the attack.

Congrats to you and the other award winners. Your "random" illustrates your versatility.

Joan, Thank you so much for this, I think it is a major award! (shameless Christmas Story reference)

I hope that you enjoy all of the new snow!

Thank you Joan, I really appreciate it but I must admit to laziness regarding follow thorough.

I did however join the blogs in your award column and look forward to reading more.....

I don't like the phone either :)
I have only been bitten once and I was a dog groomer for 30 years, woof!

congratulations Sharkbytes, I know not only in blogging you are very versatile, but your amazing activities too.

congratulations on your award.
I don't like talking on the phone either

Congratulations! Interesting bits of trivia about you. I loved talking on the phone as a young girl. Now, not so much. And I hate texting and its lingo.

CD- I'm surprised you will play since you are quite secretive, but I'm glad!

reena- you more than deserve it!

Lin- um, shuffle, shuffle. you caught me (but if you've read NCC you had big hints)

Chuck- yeah, or it's just unfocused and random as always...

John- you are welcome- hey, I got to know you through your blog. If the wind backs off a bit, the snow will be fun

ro- no problems whether you do it or not. Thanks for the "joins"

betchai- I think your hikes are more strenuous than mine

Ann- I wonder if a lot of bloggers prefer writing to phoning and that's why they like blogging?

Ivy- I actually do a bit better with phone now... was horribly silent via phone as a teen

Dick- you deserve it, buddy!

Hi Joan. Thanks for moving this on. I certainly didn't know those things about you. Didn't know you were a devotee of G&S in fact. I've performed in a few of their operas, and my claim to fame is being Hebe in HMS Pinafore.