Spirit of the Woods Outing at Cadillac Pathway


Our hike this month was at a place I'd never been before, Cadillac Pathway. It was supposed to be a ski outing, but with the warm weather we've had this week the snow was much too soft for that activity. However, there was about 4 inches of snow, so what we did was a hike that we all decided was "quite a good workout." 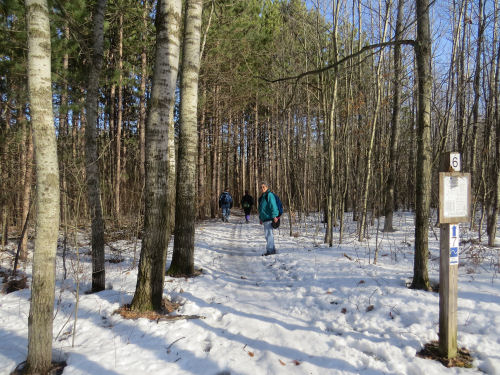 Four of us enjoyed the day. The sun shone, and we didn't need hats or gloves while hiking. But when we stopped for lunch, the wind was a little nippy. The sun made this fungus shine! Unfortunately, I can't identify it for sure. It looks like a polypore, such as Turkeytail, but the bright orange isn't typical of that species. The color is more like Sulfur Shelf or Chicken Mushroom, but the flesh doesn't seem thick enough for that, and the "flowers" are too small. I'm forever forgetting to look at the underside of fungus, so that's no help. Sorry. 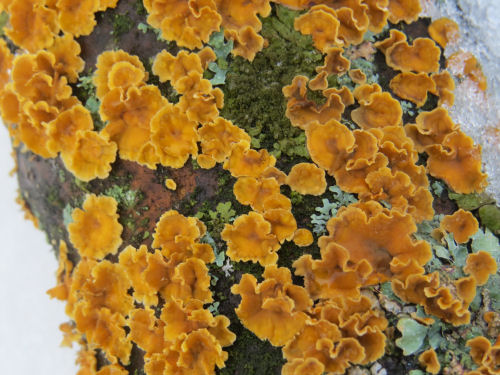 We walked a total of 4.75 miles, and a bit of that was along the Clam River. I'd never seen the Clam before. The Clam is a small river that eventually runs into the Muskegon River. Actually, I don't think I've ever been to this trail system. It was a bit of a drive. 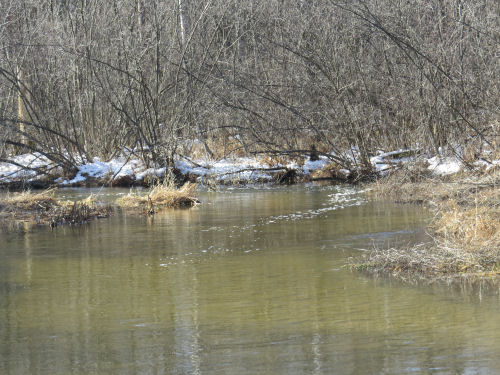 Finally, here's a game. I didn't plan it that way, but that's how it turned out. Find the bird in this picture. 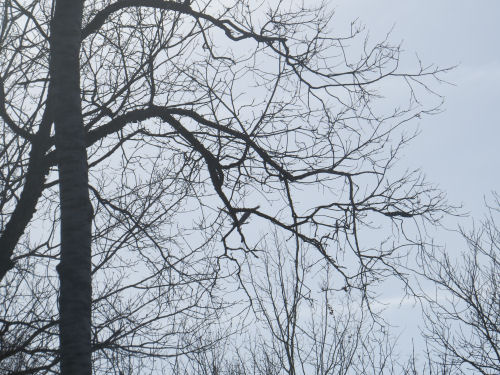 I love going new places, and although this is a bit of a drive it would be fun to see all the trails in summer. No dogs went today... they are not welcome on groomed trails. And we had to walk out of the groomed pathway, which made it even more difficult. I had an achy hip when I got done. Not a big deal, just a little bit.

Email ThisBlogThis!Share to TwitterShare to FacebookShare to Pinterest
Labels: hikes, Spirit of the Woods

The photos are lovely. We hike like that when I visit our youngest in Maine.

She makes sure of it. I always say I'm going to the fat farm for a month.

I have been hunting for birds in pictures everyday all week. You think I'd be able to find it. But I can't.

I hope you have a great Sunday and a wonderful week!:-)

Wow...that was really hard, but I did find the bird! Looks like a wonderful place to hike...great photos

Hi Joan, I think you have almost got the fungus - to me it looks like Stereum hirsutum - Golden Beard we call it here, there is also S.ostrea Golden Curtain or False Turkey Tails. Worth checking out - We find Golden Beard on a lot of dead oak around here :)

So many foils. I found half-dozen "birds". Tricky.

hello sharkbytes its dennis the vizsla dog hay wot kind of birds ar they??? ar they noizee birds??? becuz i am skayrd of noizee birds and wood rather not find them maybe we cud find sum nice chikkin in the fridj insted??? ok bye

Shark, we STILL have no snow. It's very discouraging. I'm getting worried about the gardens. I sure hope we aren't going to continue with this drought into the coming year.