I thought I'd show you a piece of equipment from work. This is the stacker. I suppose it would be sensible to start at the beginning of the line and trace it through to the end. But I didn't think to do that. So, you'll get it piecemeal.

At that point, the paper gets sucked up near the ceiling on a belt system, and travels across about half the room. OK... now we can talk about the stacker. 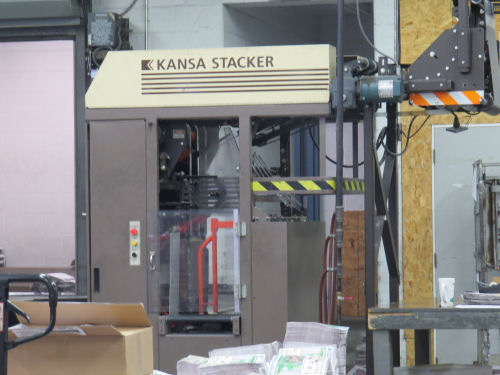 From the belt near the ceiling the paper comes down through the area where the orange stripes are. The papers fall into the big open center of the stacker and are counted. When half the bundle size is counted the orange bars inside switch the pile around so the second half gets stacked in the other direction.

When the pile is full it is pushed out the back to a conveyor where it goes to the bundler, a human who directs the pile to the strapper, a machine that puts the plastic binding strap around it. Unless the pile is a mess. Then the bundler scrambles around to restack and sort and recount it.

There are so many places in this whole process where things can and do go wrong, it's a wonder anyone gets a properly stuffed paper.

It's also very noisy. Too noisy to talk, even. If you need to tell anyone something you have to yell. Any readers who know me really well know that I don't like high noise levels. I'm not going to start complaining about this job. I knew exactly what it was going to be when I started. But I will say that I spent most of the day, today, sitting in the quiet and more or less staring at a wall. Sometimes I just need to do that.

Don't forget to vote for the funniest post of 2012.

who knew there were so many steps involved in putting the paper together. I wouldn't like working in all that noise. I can't stand listening to the noisy exhaust fans all day where I work. Drive me crazy

Joan you are indeed a woman of Iron, I know that I could not work in that environment, tried it long ago in a cotton mill - the only thing I gained was lip reading :)

Thanks for the inside look at how the paper get physically assembled. I'd wondered about that . . . now I know.

My hubby hausl those things but I never knew how they work. Thanks for that input.

I have to agree with everyone though about the noise. Also I have done repetitive jobs like this in a noisy environment and it really takes a lot out of you!!

I know you must have really enjoyed the quiet when you got home. Just keep concentrating on the peace and quiet of the woods while you are at work.....and the next time you will be out there hiking!:-)

hello sharkbytes its dennis the vizsla dog hay dada sez the stacker sownds like the naym of a heero frum the faymus dokyoomentary mystery men maybe like the shovelers sidekick i hav no ideea wot he is tawking abowt as yoozhual!!! happy noo yeer!!! ok bye

Hopefully you're wearing earplugs so you don't blow out your hearing!

Ann- I am going to try to show the steps in more detail over the weeks to come.

Carol- well, I'm not going to make it a career! It's just some extra cash for a while. A cotton mill sounds somewhat interesting.

Jackie- so far the job is not automatic enough for me to "drift." I'm still hopping to take care of all my stations.

Michy and Lin- I think I'm going to take my own next week. Thanks!