I picked up a free book that is volume one in one of those series that you bought one of at a time, forever. But I'm happy to have this one. The series is The Vietnam Experience, and this volume is called "Setting the Stage."

It begins with the end. The final days of Saigon.

Some of you may remember, some not, two of our boys are Vietnamese and they both came from Saigon during those last days.

This picture was in the book- orphans boarding a C-130 cargo plane. This is not the flight that either Steve or Joshua came on, this flight was later, one of the very last to leave Vietnam, but to me it's still poignant. 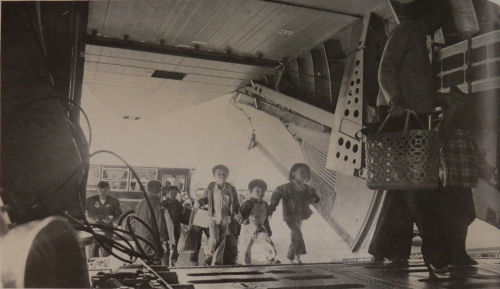 Steve's paperwork was actually in order. We'd been working at his adoption for months, and it just happened that he was ready to be moved in that month. We had been told he'd be leaving Vietnam on either April 4 or 5, 1975. You might remember there was a DC-10 full of orphans that crashed on April 4. One of the doors blew off. The pilot managed to crash land, but 78 people died. We did not know for hours if Steve had been on that flight. Then we finally got word that he was on the next flight, and we picked him up in Chicago on April 6. He was only 6 months old. We expected a tiny waif and got a healthy hunk- he'd been in foster care since he was 10 days old.

Although he's older, Joshua did not come to live with us until 1977, and he was one of those kids that was just stuffed in planes at the last minute with no proper paperwork. But he would have been very much the size of the child in the middle of that picture, maybe a little smaller. He was extremely thin and malnourished.

So that's my quality item for today. If I could pick only one foreign country to visit, I would like to see Vietnam now. Neither of the boys has any interest.

In other news: I wrote in the morning, but not on the book. The afternoon was intolerably humid. I figured up how many sheets of plywood, insulation, etc I need for the trailer, and then worked on one of my never-ending sorting projects for a couple of hours.

My boss is Vietnamese and I don't know his whole story but I do know that the day he celebrates as his birthday is the day that he was adopted. His actual birthday is unknown.

This is actually very informative article - not like most of what I see online. Thanks for the free share and looking forward reading your updates! simply wow!

Ann- We know Steve's actual birthday, but not Josh. His was assigned.