This post has sort of morphed into a memory from New York in May. Based on my wonderful day with Robert, chasing big trees, I used that information for one of my monthly newspaper columns. Since then I've heard from 14 people who have 27 trees, of 11 different species that they want me to come look at. Some of them are clearly not champions, but it's amazing how proud people seem to be of their trees.

You might recall that one of the trees we looked for, and couldn't find, was an American chestnut, Castanea dentata. Three people have told me about chestnuts in Mason County. Those will be interesting to track down.

So, that made me remember that Marie and I saw a chestnut that had actually fruited, on our hike in New York last May. Very few of the ones that have regrown (since the blight wiped them out in the first half of the 20th century) actually fruit.

So, I bring you an American chestnut. The bark breaks into these flat, strap-like ridges when the tree gets about 6 inches in diameter. 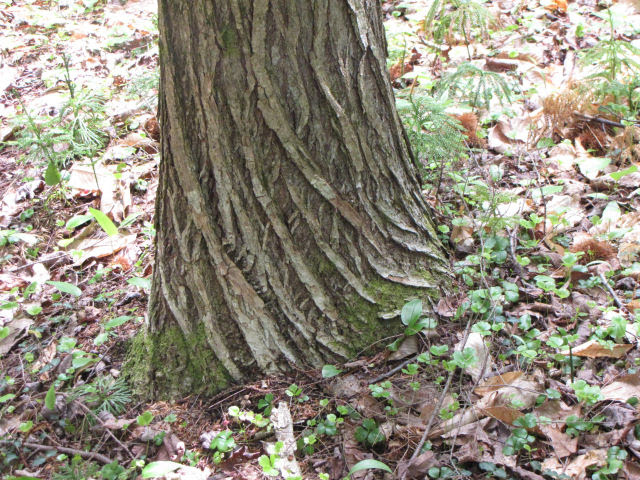 It was too early to see the mature leaves, but this shows how they emerge from the buds. 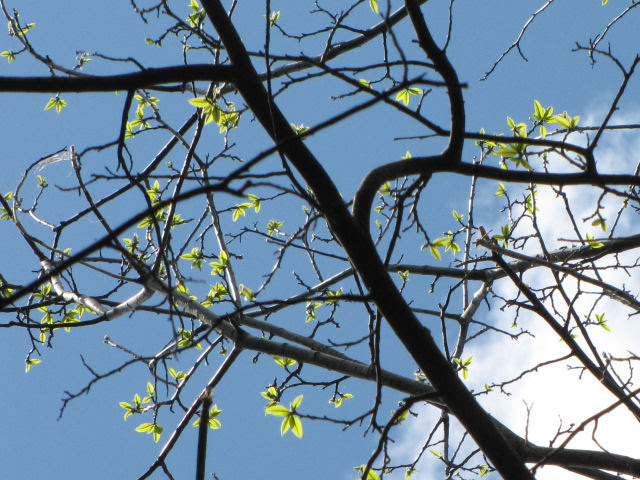 And here's the proof- the spiky seed pods on the ground. The nuts are inside. 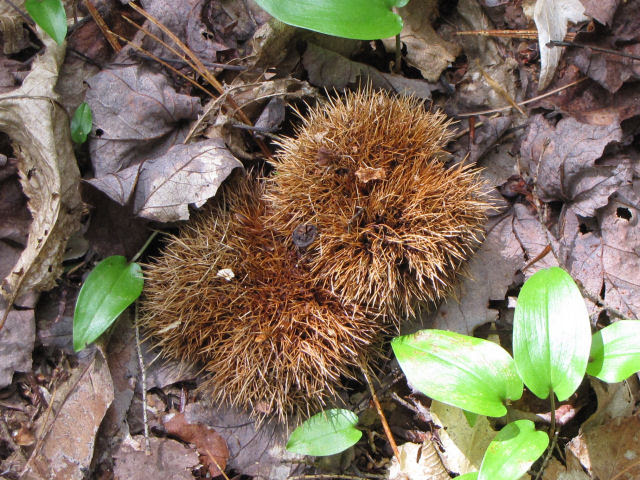 Who knows, when I get a chance to go hunt trees again, maybe there really will be a chestnut.

The Chestnut bark is cool looking. Great shots! Have a great day!

I miss the elm trees. I was on the mall in Washington DC and looked up to realize I was standing in a grove of elm trees. Large healthy elm trees. I'll have to admit tears flowed at the sight and of memories of the home where I grew up.

We get lots of chestnut trees around here, and nuts on the ground in the autumn. Horse-chestnuts too with conkers - they are even more common.

Hi Eileen- yes, once you know what to look for it's sure easy to spot.

Chuck- Yes, the elms were beautiful. I don't remember very many

Jean- We have horse-chestnut... more a bit farther south, but almost all the chestnuts are gone.

We have plenty of Horse (Conker) Chestnuts in the valley the Sweet Chestnut is the one we roast never found any in the valley, nearest ones about 10 miles away, as for elms just a few odd ones the dutch elm disease devastated them in the late 60s, now we have our ash trees threatened with dieback through Chalara fungus, our valley has a lot of ash especially saplings so it would be tragic if it hit us.

So then, the bark picture suggests that the tree I tried to identify a while back was a chestnut. Ah, the misspent youth.