Today was another long workday. But I really wanted to go to some plays at the Art Center, so I came home, put my feet up for 45 minutes, changed out of the ink-covered clothes, and went back out. I'm really glad I did! Both plays were hilarious.

I always have a little bit of a problem with modern comedy, in that I prefer the humor to be cleaner than most people are fine with. These plays were a little risque, but they didn't make me wince.

First was The Problem by A.R. Gurney. There are two characters, a husband and wife. The play opens with the very pregnant wife interrupting her preoccupied professor husband. He is surprised that she is pregnant and comments that he must not have been paying much attention because she is obviously almost full term.

They discuss it for a few minutes, and the wife begins to leave the room, but then mentions that there may be a little problem. The baby may not be his. 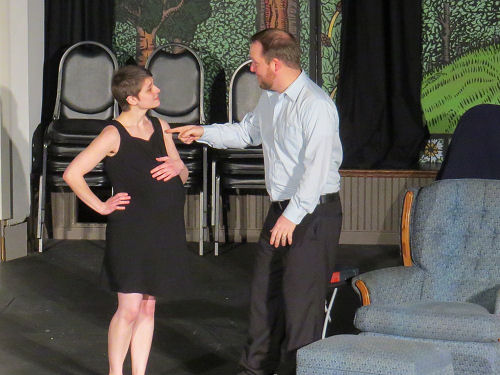 He wonders why, and she points out that their love life has been rather lacking. He's shocked to learn that they haven't had sex for five years. They discuss that for bit, and he decides it's fine, he'll just accept the child. She starts to leave the room, but then mentions there may be a little problem. The baby may be black.

The husband reveals, rather abashedly, that he's been dressing up as a black man and he's really the man she's been seeing, so the baby is his after all. 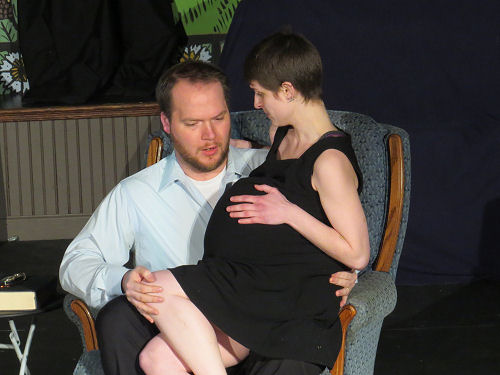 They discuss this for a few minutes, and the wife begins to leave the room, but then mentions there may be a problem...

I won't give any more away.

If you take your Tennessee Williams very seriously, you'd better skip this play. But if you can occasionally laugh at even the serious parts of life, you'll love it.

In this play, the damaged Laura is instead, a boy, Lawrence. He collects glass swizzle sticks. His overbearing mother, Amanda Wingvalley, accuses him of faking his limp, his eczema, and asthma. He scratches whenever she talks, and his asthma flares when she tells a joke.

Of course Amanda wants her son Tom to bring a "feminine caller" home for Lawrence, from the warehouse where he works. Tom, who seems to be a little damaged himself, brings home Ginny, a partially deaf lesbian. 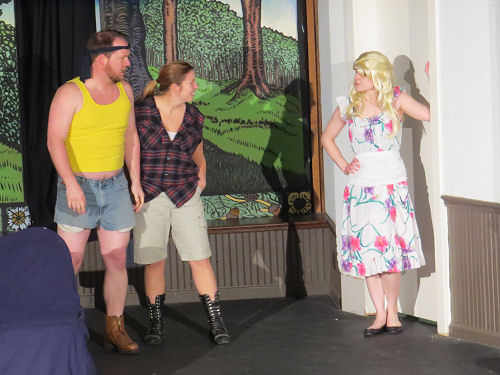 Lawrence shows Ginny his swizzle sticks. "I call this one Pinocchio," he explains. 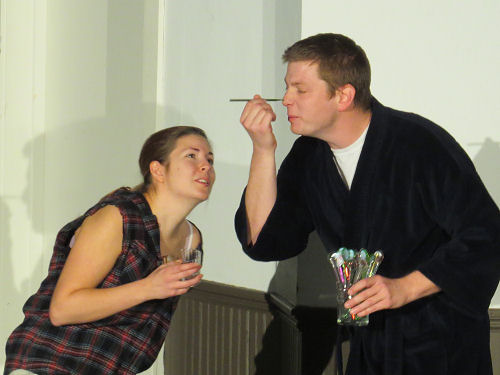 I think the scene where the "Blue Roses" nickname is explained is particularly funny, because it makes no sense at all, poking fun at how silly the origin of the name, in Glass Menagerie, would be, except that it comes in the middle of a very serious play (life really is all a bad joke, right?)

The Civic Players is a small group, but they work well together and are good at taking on different roles. This is the group that staged Almost Maine a year ago.

Email ThisBlogThis!Share to TwitterShare to FacebookShare to Pinterest
Labels: Ludington Area Center for the Arts, theater

Wish I were anywhere near there, so I could see those acts. I'm very curious how they end. :)

What a day! An an interesting evening.

Oh my goodness it sounds and looks as if you had a lot of fun.

I do take my Tennessee Williams very seriously though. Imagine that...me melodramatic? LOL!!:-))))

I had PC issues today so I am running late!!

Oh my how could anyone so a spoof with Tennessee Williams? Oh please do ask them to leave 'Cat On A Hot Tin Roof' alone....that's my favorite!:-)

I love theater ~ sounds like you had a busy but enjoyable day!

Sending wishes for a new year filled with happy laughter!

Ivy- hope you get to see them sometime (or you can look 'em up online, of course)

Chuck- the work days are interesting. It's just money for which I only have to endure, not think about anything.

Ann- I'm really glad I mustered up the energy to go.

Jackie- Uh oh! You and my husband... he decided he couldn't handle it and didn't go.

Lorraine- welcome, and thank you!

Going to the theatre for an evening is fun. I would seeing a comedy too. Have a happy Sunday!

I want to thank you for supporting our local theater in Ludington! The Lakeside Civic Players are lucky to have people like you in the community that are willing to go see their shows even after a long day at work. I am not sure if you had a chance to see the LCP production of "RENT", but it is a testament to how far the group has come since they first produced these one act's.

Josh- I wish I could afford to get to more productions, but I've been proud and entertained at the ones I've attended. Maybe one of these days I'll get involved.