I know that I could have let these grow a bit more. They would have gotten fuller. But, the thing is... Marie and I are going hiking in September. No one will be here to care for these or eat them after I leave for the following week. So, I decided I should start eating the biggest one each day, and they should be all done before I leave. 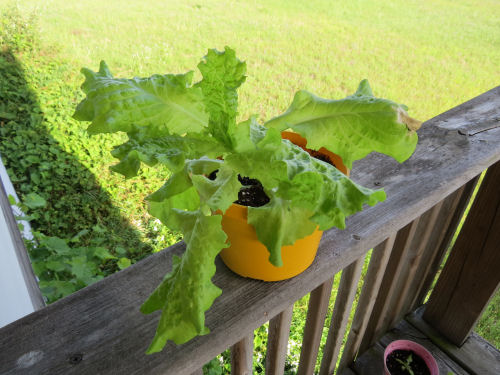 This was the first sacrifice... it did feel a bit that way, given how hard I've struggled to pull off this little project. But, the deed was done and it went in last night's salad. (It wasn't nearly as hard as the year I raised chickens as a kid and then had to chop off their heads to pluck and dress them for sale.) 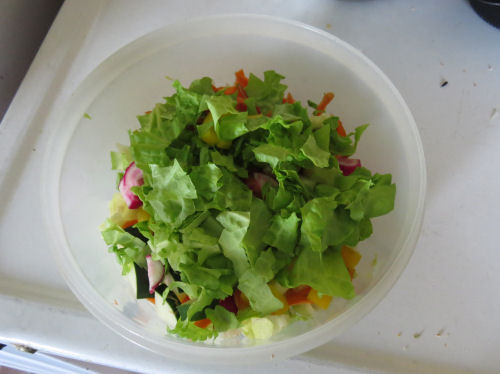 That one was a little bitter- it added a tang to the salad. Tonight's variety had red-tinged leaves and it was sweet. 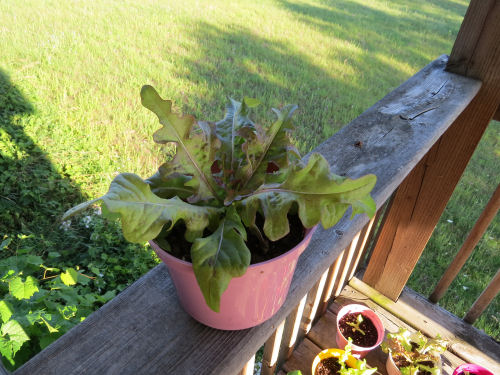 Not bad considering how late this really got on track.

In other news: I had trouble getting to sleep last night, and I gave myself a good talking-to during those hours. I know a lot of you don't think so, but I've been pretty lazy the last couple of weeks. That needs to change. There are a lot of things I have to get done, or at least work on, soon. I spend a lot of time playing my silly games. I'm not willing to give the games up completely. I don't watch TV at all, so the games are kind of my relax time. But, I don't need to tend them so closely. It's the competitive part of me... I want to be one of the top players, no matter what.

Anyway... I made myself do two things I didn't want to today, both involving phone calls and/or interactions with people who have no interest in taking care of my issue. Got one situation totally resolved. They other one (the final dispensation of my old car) is still in process.

I wrote in the morning, did those hateful tasks, and then worked on my trailer in the afternoon. Some progress, one step backwards. Will report soon.

I've never had to chop off a chickens head but I can say with certainty I would rather chop a head of lettuce. I remember when my dad used to grow leaf lettuce in his garden I always passed on it because I didn't like the bitter taste of it.