I worked on the trailer project 5 hours today, and finally, it looks like something happened.

The most important part is that I finished the structural bracing. I took these two pictures lying on the floor and looking up at the roof. 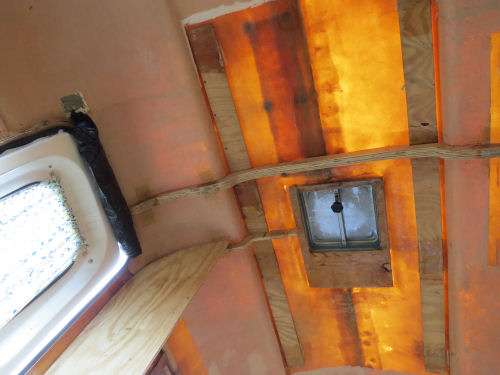 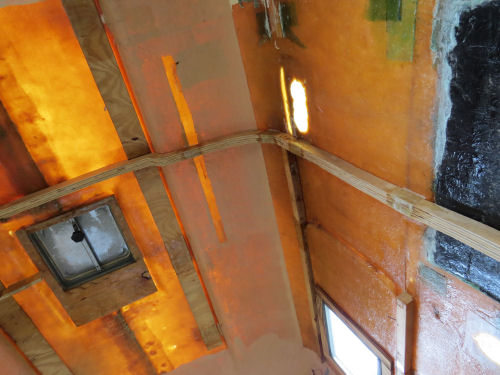 When the last of the fiberglass was really and truly dry, I performed the first crucial test. I took away the brace from the outside wall that had been pushing inward. Then... the big one... I removed that temporary crossbrace that was bolted right across the middle of the trailer. There were no explosions of cracking fiberglass, no little tearing noises, no popping as walls tried to move, nothing. That is wonderful.

The second big test will be when I tow it. Hopefully, nothing will happen again.

And, hallelujah! I can stop having to work around that board that was right across the middle of the trailer. That was beyond annoying. Doing contortions to get anywhere was getting old.

My other goal for the day was to get the door-side bench roughed in. This meant I had to make some decisions I'd been putting off. Mainly, about the configuration of the seat panels that will be hinged to provide access to the storage underneath.

As a reminder, I am extending the benches on both sides to make them longer. So I had to extend the back bench support. At first I thought I'd just ignore the wheel well and put in a chunk of 2x2 ahead of it. Did that, and decided I didn't like it, so I ripped that out before the fiberglass set up, and cut this custom piece. Let me just say that every single piece of anything inside one of these trailers has to be custom cut. Nothing is square. Anyway... I know this is very thin in the middle, but I preferred to have the support continuous. 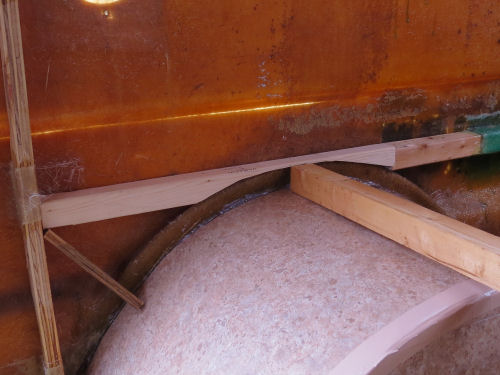 Then I extended the front panel of that bench to the new length. That was a piece of cake, except that I had to go to the store to get corner braces. 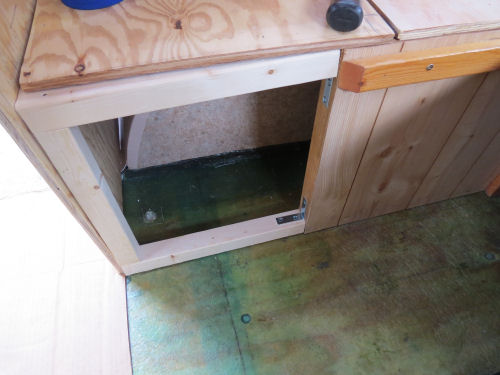 Got those done, and cut the sections of benching for the seats. That partial wall is, again, just balanced in place, and it's not actually the exact correct size. I rough-cut it bigger until I could see what was going to pass for orthogonal once it was in place. Good thing I did. It needs to be trimmed up quite a bit. 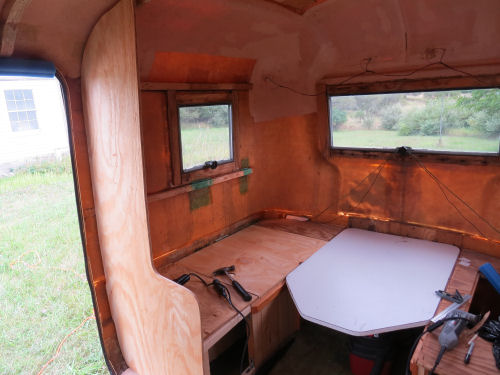 What you can't see in this picture is that the bench pieces are rectangles and the spaces they need to fit on are not. They all have to be trimmed before the cut and bracing for the hinges is added and a finger hole. But they are fine for right now. My goal is to get this usable by September 6. I can just tack the benches back in place temporarily and it will be fine. The paneling on the front upright is still the old stuff, and obviously not across the extension I built. That doesn't matter right now either. That is all finish stuff I can do another time.

Tomorrow, if it's not raining... I'll get that partial wall cut and attached, and start on the second bench. There is more fiberglassing to do on various supports, although that big bracing job is done, done, done! I'm beat, but it feels good.

In other news: I wrote in the morning, and bought a couple of groceries while I was at the store. Everything else is trailer.

You got a lot accomplished.