Well, I did replant them, and have had them outside all the time. Two of the tubs have blown over twice, all of the smaller seedlings have been transplanted at least once after being uprooted. But these are certainly happier.

I think I'll try separating them again to put just one per pot and use regular pots. The milk jugs work fine, but I have stacks of pots. I had visions of using the handles to create some sort of hanging garden on the deck. Silly.

Anyway, just as a reminder, here's what the previous sprouts looked like before they died. Same package of seeds, same soil, same care. But I tried to grow these inside. They definitely wanted real sunshine. 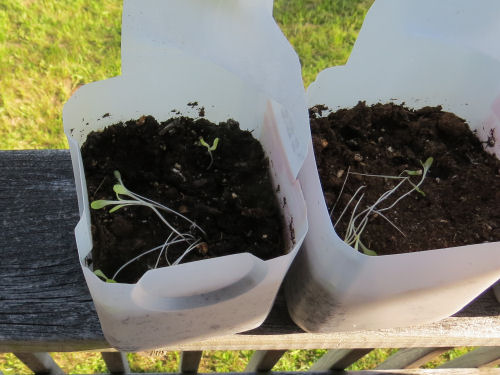 Actually, the whole project is pretty silly. If I can grow eight little heads to maturity the cost of the seeds will equal what I could buy those eight heads for at the store. And, I also bought new dirt for them. Going to be hard to break even, even if the seeds last another year or two. And what do you think the chances are they will survive the squirrel and racoon and birds that can all get on the deck?

I guess I just can't give up trying to grow something.

In other news: I wrote all morning (but not on the book), did another load of laundry, got a bunch of stuff ready and then walked to the bank, Post Office, and store. Also worked on the trailer a little bit.

The second ones look like what I would end up with. I've never been very good at any kind of gardening.