So, not long after I covered the wheel wells, I got three of the six internal braces cut, and then the whole project stalled again. Yesterday, I decided I was being lazy and got busy and cut the other three pieces. Here are the five skinny ones. 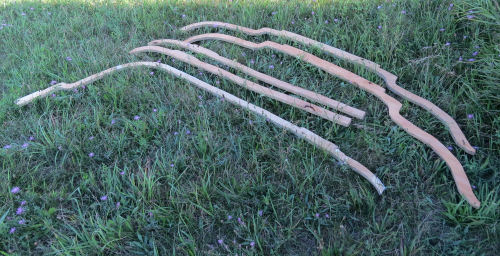 The sixth one is actually a partial wall that goes beside the door. Here is that piece, just balanced in place. (read on for why the beautiful vinyl is no longer on the floor, and with that temporary cross brace still installed) 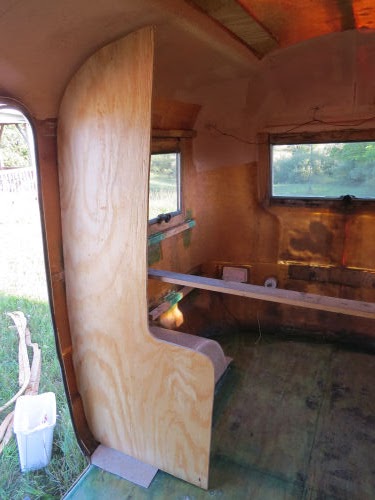 Then I went inside and rolled the vinyl back enough to make a hole where the wires need to feed through it. Horrors! There was a layer of water between the new vinyl and the floor. Everywhere. We aren't talking damp, we are talking water. Enough to soak a whole bath towel.

Fortunately, only a bit of tape was yet permanently holding the vinyl down. So I pulled the vinyl out and dried everything, Took the vinyl in the house. What was the cause of this??!!! Need to figure it out before I proceed. There are two little holes in the shell to patch yet, but they are both low and under the curve of the wall, so I can't imagine that much water could come in there.

There's been no water on top of the vinyl after we've had rain, because I've been checking. I was left with thinking this was all due to condensation, a problem this single-wall trailer is plagued with. It's a big reason I'll be insulating everything. Could that possibly account for so much water?

I spent most of the rest of my trailer work time today reworking the order of attack to decide if I could do most of the insulating before I put in the flooring and the benches. I set the old benches back in place just to give my brain more to work with. They aren't fastened... just balanced. I even cut a piece of the insulation and just tucked it in place.

Answer- there's no way I can do the insulation first. There are too many things that have to get attached behind or beside where the insulation will be fitted. And some of those have to go in after the floor covering.

Thought some more about the water. It was just too much to account for by condensation. It's that darned door. We had one storm that came from the east, and that means the door side got a full-on assault. Marie and I know from experience in a storm on the door side that it lets in a river of water when the angle is right. OK. That problem is at least diagnosed. I think I can do something temporary with pool noodles. Let's hope I can still find some at the stores that are already stocking Halloween decor. I can't just tape plastic over the door because tape will not stick to the fiberglass.

And the braces? I put the first one in place, getting ready to fiberglass it in. I had previously measured a line for it that is parallel to the door frame. But today, I leveled the trailer, and then checked it for being perpendicular to the floor. Not a chance. The two lines are 3/4 inch different by the time the line reaches the top of the door. This is a classic OCD problem- should I make the wall look vertical (parallel to the door) or actually be vertical (orthoganal to the floor)? I opted to split the difference.

So, here's the first brace tacked into place beside the door at the ends of the cross-bracing pieces. It is the "split the difference" choice, and I think it looks OK.

Next work day I'll be fiberglassing. You can see the one piece of green foamboard I jammed in place, and the old bench. The new bench will extend all the way to the partial wall I showed earlier that butts beside the vertical brace. You can also see the problematic gap at the top of the door. I can't fix the door alone. Haven't solved that pickle yet. 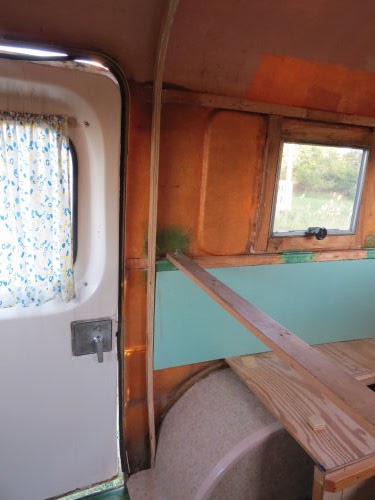 Three afternoons used up, and very little actual progress made. Think I'll get this done before I kick the bucket?

In other news: I wrote in the morning, did errands and went grocery shopping in the early afternoon, and then did some more writing, but not on the book.

Well at least you discovered all that water before you had everything in place. I have no doubt you will come up with a solution for the door.

for some reason your photos are not showing up, just blank spaces where they should be. It could be that the folders you are storing them in do not have the correct sharing permissions enabled.