If you were wondering what happened to day 1 in Huckleberry Bog, it was swallowed up in the day we also stopped at Evageline Shelter. 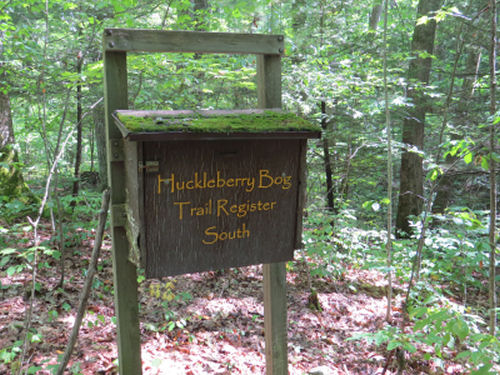 This is an approximately 2 mile stretch of the Bristol Branch which also has a return loop so it can be hiked as a round trip. My friend Irene (where I am now staying), and a high school teacher and class, and the naturalist from Letchworth State Park worked together a number of years ago to develop an interpretive booklet and numbered stations. What they produced is quite extensive, and a real resource for teaching. Or, it can be enjoyed more casually by anyone. 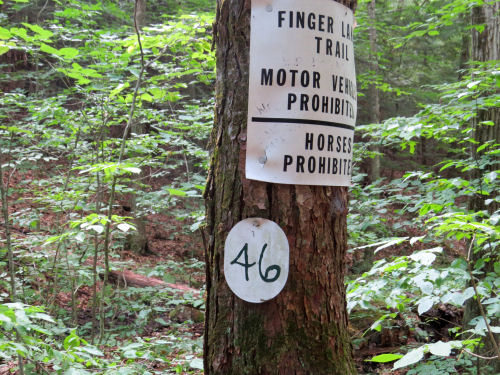 However, plants have a nasty little habit of changing over time. It's perfectly natural. The light changes, or the water table, and plants decide then don't like where they have been growing and die or go dormant. Plants die and others take their place. They grow and shade out other species. It's only nasty if the humans have done a significant amount of work to try to tell other people where they are by means of a booklet.

Irene was pretty unhappy to hear how much the plant communities have changed since the booklet was developed. She was wondering where she was going to now find someone who knows enough of the plants to check everything. Then we realized that I was wanting a project to do after Marie and I finished hiking, and I have the knowledge to be able to do this. There you go... it's what I'm doing now. So, today I spent a lot of time checking the text of the booklet against what plants are still around each number tag. I added some markers to others, such as this one for Sarsaparilla. 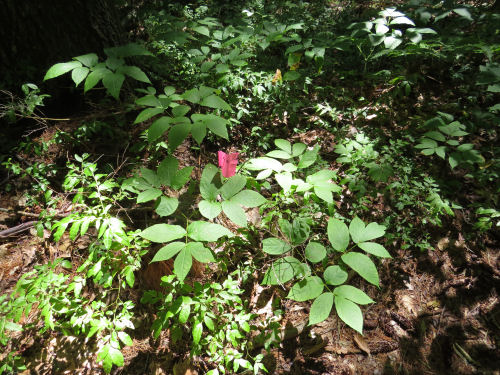 I won't bore you with a five-hour botany lesson (how long I spent on about one mile of trail). But I do have some cool pictures. This is a fungal pattern on Yellow Birch bark 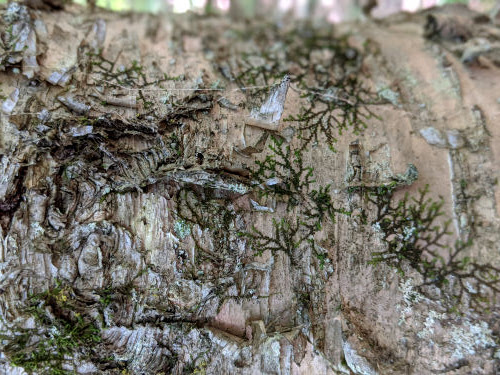 This golden fungus adorned the base of a tree. Not sure what it is. 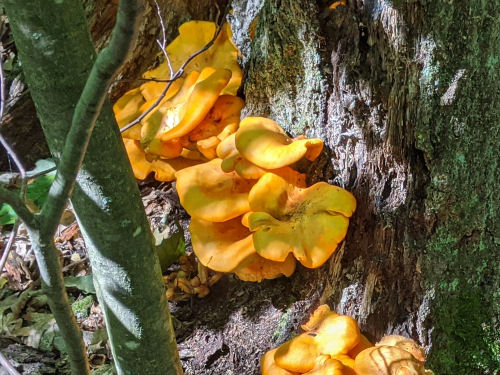 This is an American Chestnut. There were hundreds of sprouts in this woods, trying hard to make a comeback. Maybe one of them will succeed, and be the forerunner of the genetic winner that will allow the species to overcome the Chestnut Blight. They usually only get a little larger than this one before they die. 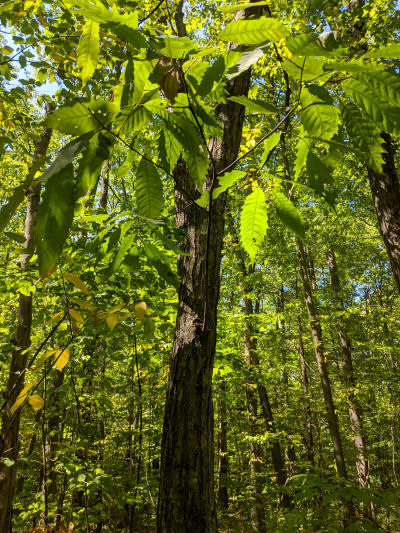 Finally, I'll leave you with a little red eft. He wasn't as bright orange as some, but they always make me smile. 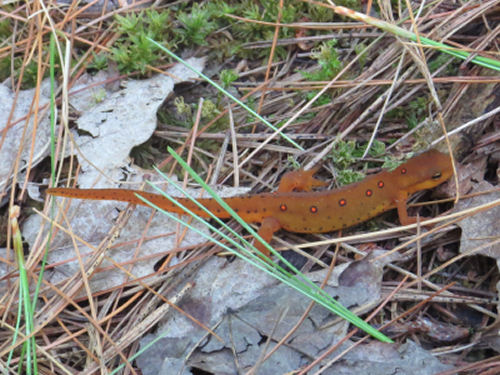 I got half of the sites checked today. I'll need to spend one more day to complete the semi-inventory. (Not a scientifically conducted inventory, but a better-than-casual attempt.) And it will also take about 2 days to get the data collected so Irene can use it to have the booklets remade.

So, you'll see more of this area. It's where the "hugging trees" are located. They are a man-helped anomaly, but it's always a treat to find a small area with such diverse plant populations. Really a nifty place.

Miles walked? Not too many, except there was a lot of back and forth, and wandering around. At any rate, I'm beat for today.

That's a project that's right up your alley. Interesting fungal pattern on tha bark. That red eft is a cute little guy.

Lulu: "Our Dada says he sure hopes that the American Chestnuts make a comeback someday. And while he's at it, he hopes we get the Fountain Elm trees back too."

I live about 2 hours from Letchworth. I’m glad to learn more about the natural resources. I’d like to do the orienteering course there. Are you familiar with it?