Anyway, what I did was go to the Adirondacks to particpate in a trail work day. The North Country Trail didn't have a route across the Adirondack Park for almost 30 years. Little by little, now, agreements are being made which is giving the trail an actual treadway. It has been a dream of mine to help build that, even in some small way. But I live 15 hours away.

So when Mary Coffin, who has spearheaded this effort, posted that there was a work day this past Saturday, I had to go. It was a few hours drive back to the east, but nothing near 15. I camped near Mason Lake. 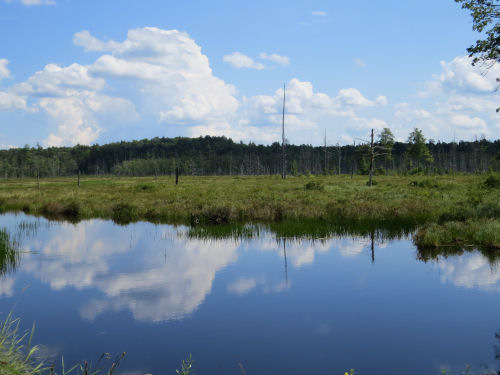 A rainbow welcomed me that first evening. 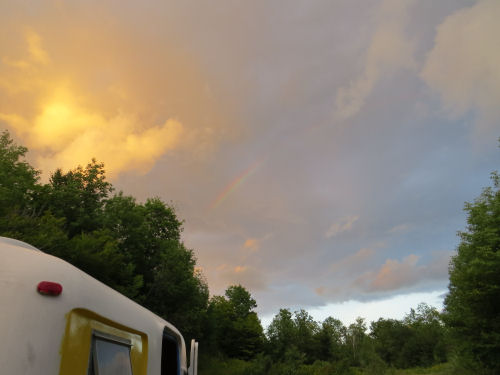 Next morning, I drove to town and met the other people who also came to volunteer. Of course, I knew Mary, but I also knew one other woman who came. Mary's husband Bill was there as well, but he isn't able to do the physical work any more.

A ski resort named Oak Mountain has given permission to build trail across their property, which will eliminate a road walk. A tentative route had been flagged. We checked and adjusted that, and began defining the treadway. We raked, cut branches and some roots, and put up blazes. We completed almost a mile. "Completed" isn't really the correct word, because there is a lot of benching to do to level the trail and remove rocks. But it is able to be walked and followed by a hiker. 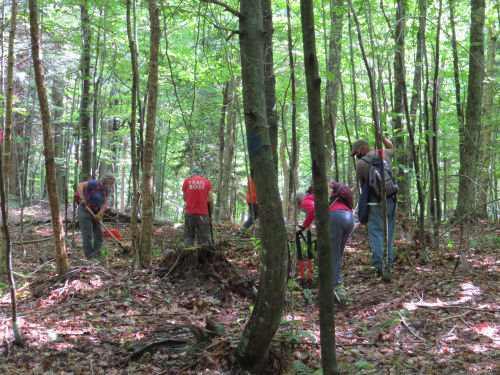 Going back to the campsite that afternoon, a mother bear and three cubs crossed the road in front of us. I was only fast enough with the camera to catch the last cub scooting under the guardrail. 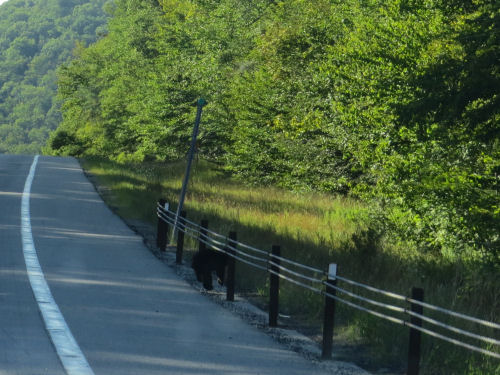 Mary and I went out again the next morning. Our goal was to follow a snowmobile route which would connect the trail we built on Saturday with the next road. This is not ideal, but for right now, our trail has been given permission to use that established route. We crossed Whiskey Brook near where we began our walk. Despite many junctions, we managed to make all the correct decisions, and connected with the work we'd already done. Mary took GPS readings, and we flagged it with tape. Hopefully we'll soon have permission to put up the blue blazes. 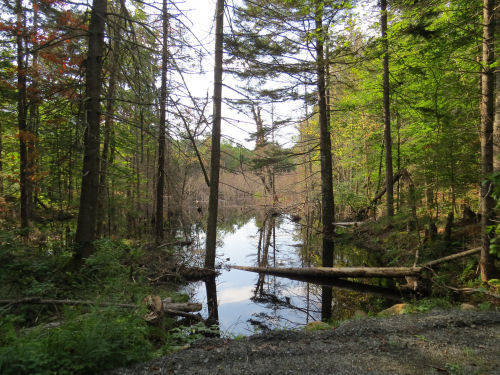 When we got back to Oak Mountain, we did do some more of the blazing. In most places, the NCT blazes are painted. However, within the Adirondacks, they requested the nail-up style, so that is what is being used. this four-mile reroute which can now be followed eliminates a seven mile road walk! 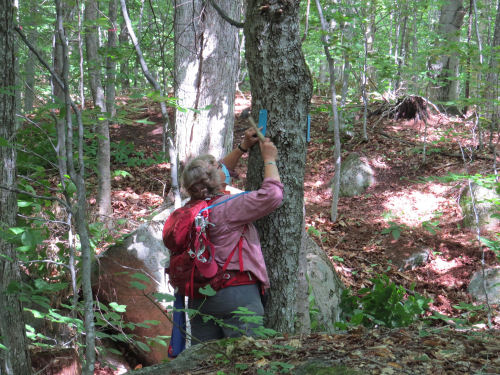 After Mary and Bill left, I had a mission. Two of them. I wanted to get a few pictures that were "real" Adirondacks. This scenic view comes cheaply, as it's seen from a roadside turnout. You don't have to work to be rewarded. But it's pretty neat anyway. This is not the High Peaks, but is a view to the southeast. This panorama made so small isn't nearly as spectacular as it is in real life.

And the other part of my mission was to find one of my best friends. He and his wife live only 20 miles from where we were working, but I hadn't been able to get in touch with him. I decided to just drive there. I knew he wasn't in the same house as the last time I visited, but I had hopes that I could locate him. And I did! This is Paul, one of my very best friends in the world. In fact, he introduced me to the Adirondack Mountains, 55 years ago. Did you ever have a friend that just resonates with your soul? Nothing romantic between us, ever. But we just seem to "know" each other. We had a great visit, prayed together, and they fed me. What a perfect ending to this Adirondack visit. I suppose we look a little older than that week we climbed Haystack and Skylight so long ago, but we don't care. 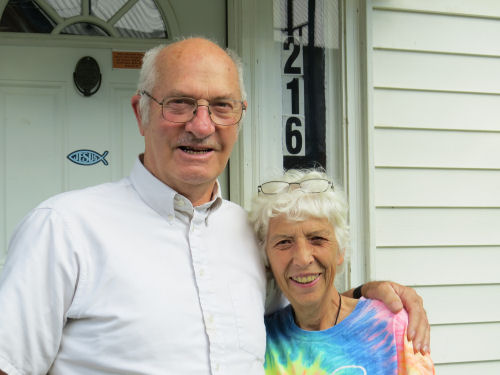 Posted by Sharkbytes at 9:29 PM

You had a busy couple days. It sounds like it was enjoyable as well

Lulu: "Our Dada says he remembers woods like those well!"
Charlee: "We're glad you got to see your friend!"
Chaplin: "Our Dada recently got back in touch with an old college buddy and they play video games online now from time to time―not quite the same as visiting in person, but still fun, he says!"