It's been mighty wet here lately. So much so that mushrooms are popping up in my yard. Imagine my surprise to see one that is completely new to me. After all, mushrooms don't appear willy-nilly. This means the fungus had been growing here underground until conditions were right for it to send up the fruiting body.

I'm pretty sure this is Bicolor Bolete, Baorangia bicolor. Something has eaten about half of the largest one in this group. 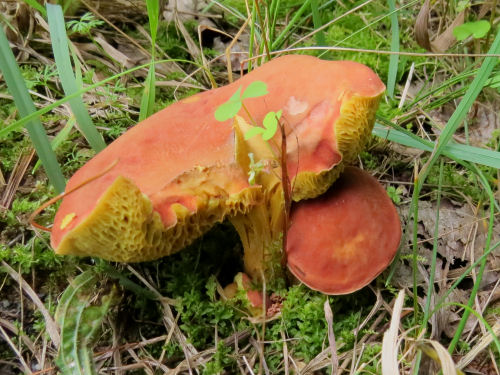 Often, I don't like to pick mushrooms in the forest because it's nice to leave them for other people to see. I feel so such compunction when it is growing one step off my porch. So here is the underside of one of the smaller caps. Boletes are characterized by having netted pores on the undersurface, rather than gills. 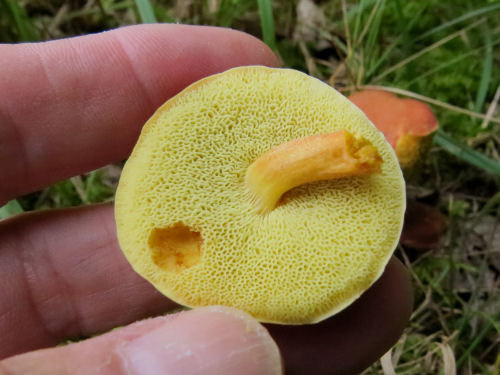 The only other candidate as far is the ID goes is Boletus sensibilis. Sensibilis is poisonous and bicolor is not. But there is an easy way to tell them apart. The pore surface of the bicolor one bruises a dark blue within seconds of being crushed. Yup. Supposedly, this one is edible, but I'm not trying it without more expert advice. Death by mushroom- often having your liver digested until you die- has never appealed to me. 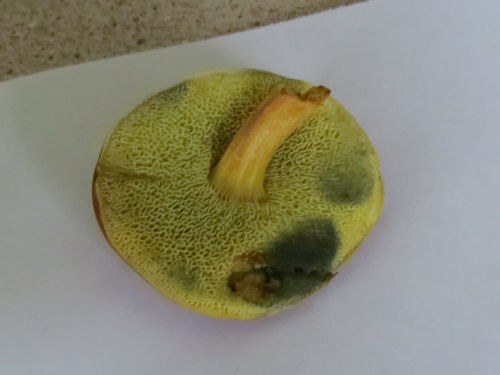 I'll leave you with the dramatic view! I do wonder what ate half of the big cap. Something knows it's edible. Slugs like mushrooms, but this really looks chewed. 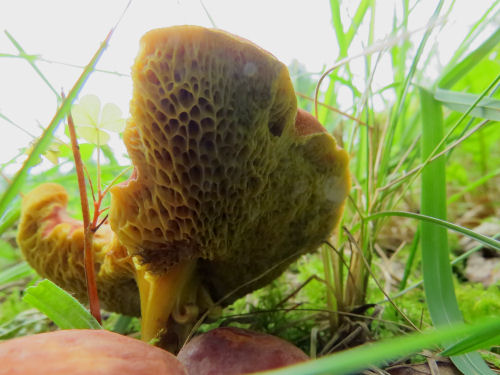 In other news: I edited, I researched and wrote a chapter. I walked to Scottville and did errands, I did some preliminary figuring for the next steps in the trailer. A nice cool day- very pleasant.

Ann- they sure do!

Lulu: "Hey our Dada is playing a video game right now where he keeps finding mushrooms in the woods and one of them is called a 'boletus'. He had no idea that was a real mushroom, he thought they had just made up mushroom names. Now he's over there looking up some of the other mushrooms in the game and they are real, too, and in the video game they look like they do in real life."
Charlee: "Wow, Dada really needs to find a better use for his time."