I did work on the trailer today, but will tell you about that maybe tomorrow. Instead, I finally bring you a picture of a robber fly, also called assassin fly, in action.

These flies are viscious predators of the insect world... if you are another insect. There are thousands of species. They can bite humans if they feel threatened, but they are not out for your blood. You won't find them attacking your ankles and calves the way some stupid biting flies were annoying me today.

I have actually seen a robber fly do this before, but couldn't catch a picture. So I'm really tickled to show you this. And on the nice white background of the trailer! The robber fly is the vertical insect, and it has a regular fly impaled with its proboscis. It injects venom which liquifies the fly's innaards, and then it sips the delightful milkshake through the hollow proboscis. Did you also learn "proboscis" playing "Cooties" as a child? 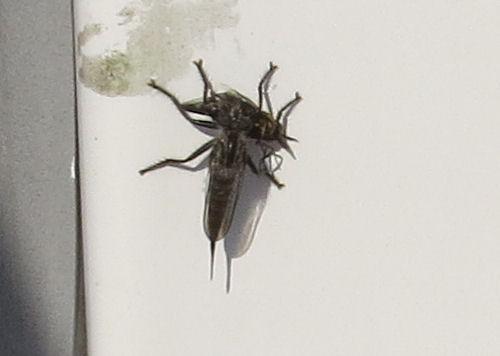 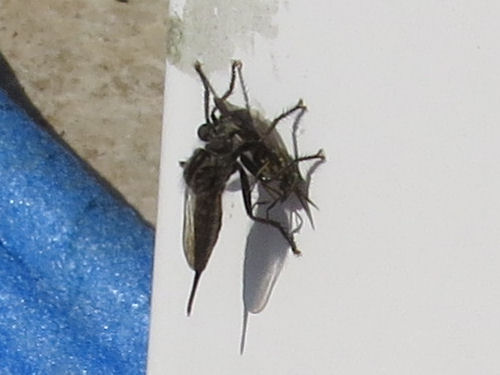 In other news: I did a load of laundry and got the final coat of white on the trailer. More on that- probably tomorrow after I do the yellow. I had a very hard time getting in gear this morning. Partly humidity, partly who knows?

It's a great time of year to see insects attacking other insects.

Charlee and Chaplin- I suspect both of you of chasing flies on occasion.

Stew- and a great time of year for insects attacking humans and vice-versa!