I'm going to play along with Chuck's Family Friday "game" today, even though it's Thursday. I won't be doing this very often, but today is a milestone kind of day. If my grandmother were alive, she would have turned 130 today. Can you believe it? It's true. She was born January 19, 1882. I have too many pictures to share, but it was SO hard to pick just a few. Even so, the ones I chose hardly do justice to the versatility of Emily Marguerite Fisher Rowe.

I was looking for the earliest photo we have of her, and I had already scanned this one from 1906, when I found a portrait from 1900. But I kept this one, because it has more interest, I think. 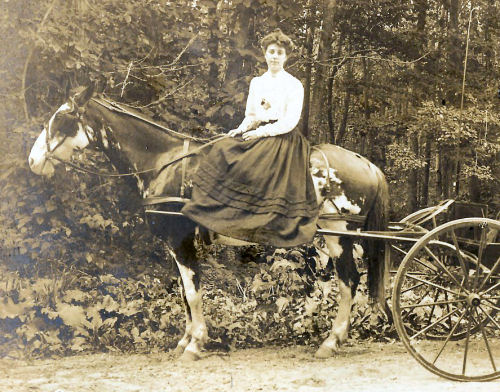 Granny, Emily, was the oldest of four children, and the only girl. She was born in Spencer, New York, to Charles and Catherine Fisher, and her brothers were Lou, Ben, and Charlie. Although she was the oldest, I never knew any of her brothers (we did receive a couple of pictures from Ben when I was about ten).

She was always athletic. Tales abound of her beating the boys at goat cart races, or climbing trees (usually with a book to read). There are photos of her climbing mountains in the Adirondacks, rowing a boat, camping, and playing tennis in bloomers. 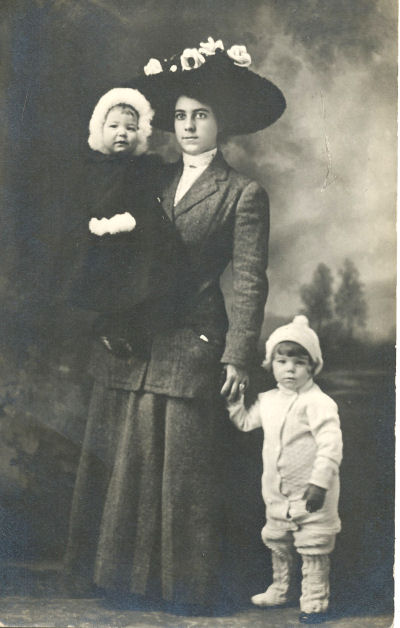 Pictures of Jacques and me at similar ages, side by side, are indistinguishable except for the age of the photo.

There was another daughter, Margaret Perham Rowe, born in 1913, who was a preemie and only lived three hours. Jacques was killed in a tragic accident when he was 26. Of course that was long before I was around, but Granny never really got over it, and Jacques was always a "presence," especially since I looked so much like him.

Granny was forever interested in many things. She gave public "readings," as they were called in the early 1900's. Most were sentimental or religious essays or poems, staged quite dramatically. She also gave lectures about quilts and quilting. There are scrapbooks of clippings about many of her performances/talks. She was an avid knitter, and taught me to knit when I was four.

Howard died in 1941, so I never knew him either. But Granny apparently enjoyed a few more years of outdoor activity. This is one of my favorite pictures, taken about 1945. I still have the snowshoes, snowpants, and sweater she is wearing! (Although the photo was tinted with colors that don't match the actual clothes.) 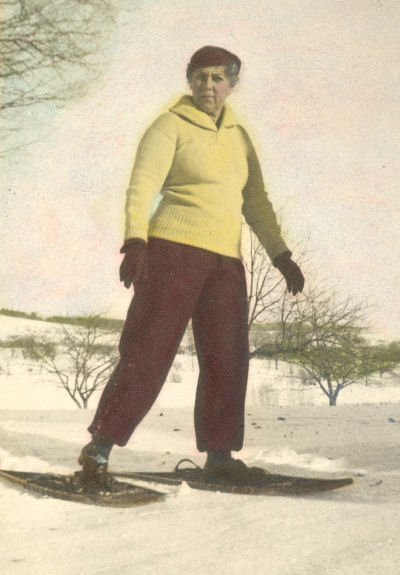 She had slowed down a lot by the time I appeared in 1948. This picture is the two of us in 1960. I've always just liked this one too. It's very typical Granny, and I look less dorky than I usually did during that period of life. 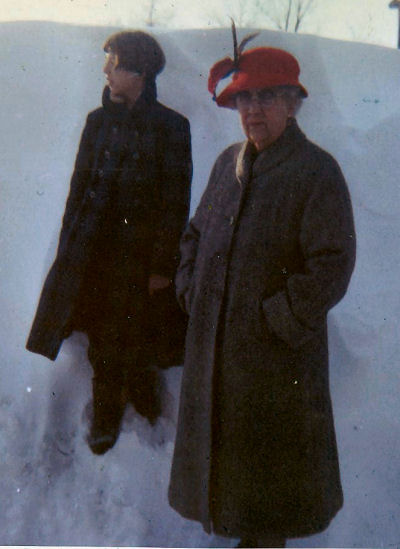 This is definitely the last picture that was taken, on her 89th birthday, about 17 months before she died. 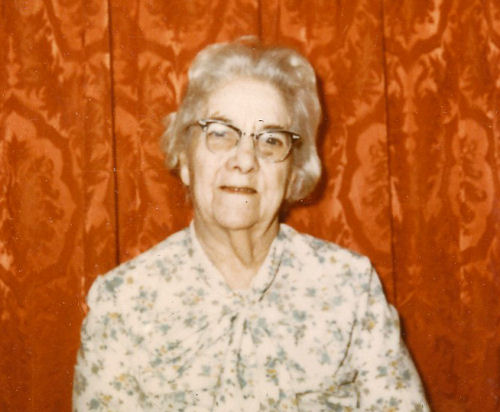 I have to say with all honesty that our family was quite dysfunctional, probably because we were all very strong personalities, also with strong flaws. Granny was an amazing person, however, and if I could have known her as an adult rather than a child, I would have been able to better understand some of the reasons she was the way she was.

I'm a strange mixture of her and my father... the two people who never could get along with each other. (That will tell you a lot about me, if you have made it this far.)

I do think that people who lived in her generation had to make huge mental leaps at the changes in the "world." When she was a child the primary transportation was still horse and buggy, and before she died we put a man on the moon. I'm not sure that even the transition to the digital age can compete with that scope of technological change.

She will hear this.

Thanks for selecting me for The Versatile Blogger Award. I never get around to re-sharing these things, but I do appreciate the thought...

You are very lucky to have pictures of your grandma when she was younger. I never saw my grandmothers on both sides. I only hear stories about them from my mother and father.

Great history of a great woman! I can see that your love of outdoor activities in held deeply in your DNA. Thanks for participating in Family Friday.

I love old picture and it is even more special with a story about the person. Thanks for sharing your granny's pictures and story.

I love family history and enjoyed reading about yours.

Love hearing family history stories. I would say you take after your grandmother quite a bit.

Wonderful historical tribute to your granny! I LOVED reading your detail, and just imagining. Thank you for sharing all that, Joan!

I firmly believe all families have a dysfunction of one sort or another. We are imperfect individuals, so we have imperfect families. And as children, or even young people, we lack the field of vision and wisdom that comes with age. It would indeed be interesting to meet our forebears with what we have learned over time.

Well, now I know where you get it! Both the outdoorswoman AND the ponytail! ;)

How very interesting! It's cool that you know so much about her and that you are able to preserve some of her early pictures and things. I hope my own Marguerite's personality turns out to be just as strong.:)

You have some great photos of your grandmother. When she was born, my grandfather was 19. (born 18630 He was long gone by the time I was born in 1955. My husband's best friend is 61. His grandfather, as a young man, transported a piano to the gold fields in 1849. I love knowing such short links to what seemed like a distant past.
I'm sending this link to our pastor who grew up in Spencer.
nellie

rainfield- I think she does hear

John- no problem- but you deserve it

Marms- try to write some of the stories down before you forget. They will mean a lot as you get older

Chuck- you do tempt me, but there are a lot of unhappy stories associated with so many of the people, I feel as if it would be dishonest to leave that all out, but then it doesn't seem appropriate for MQD

Tammy- Thanks for letting me know that you appreciated it

Carole- Who knows? maybe we are related?

Ann- yeah... I see her more and more in the mirror.

Thanks Ferd- it's a balancing act... to be honest and still remain positive.

Lin- just the outdoor stuff! I think you are seeing a reflection of light on her coat collar. Granny would never have approved of my braid.

Ivy- yes, we may owe our friendship to that name.

Nellie- wow... you have two generations with late births. I thought I stretched back quite a long time. Those are great connections.

Wow, I though it was you in the yellow sweater! Thanks for sharing your wonderful Granny. Happy Birthday to her memories.