I'll tell you right up front about the best picture I took today. It was awesome! Two spotted fawns touching noses in greeting. I was really glad I captured that one.

I also took some pictures of places I'm updating for Get Off The Couch: several of Hamlin Lake, and a little stream with sunlight and some orange leaves already fallen in it.

There was an amazing stand of blue vervain- prettier than I've ever seen it. It tends to grow thinly and not produce masses of color. This one was lovely.

I'm telling you about these so nicely, because... I discovered afterwards that I did not have the memory card in the camera.

So for penance I am making myself draw pictures. With pen. No going back and erasing. Just do it. So there.

Rose, is fury an ok motivation for heART?

First a blackberry lily that is just opening. 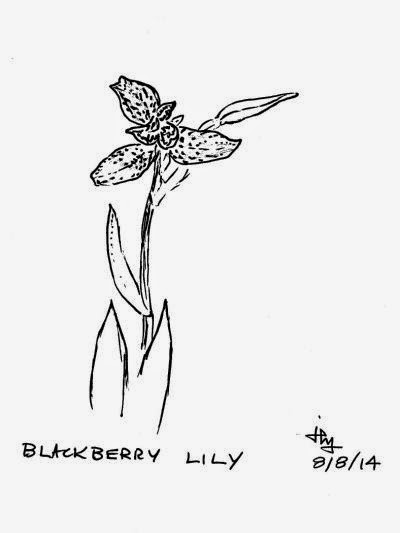 That wasn't such a test. Penance requires something harder. How about the tools on the porch? I love Rose's sketches of just anything- bottles, books, stuff on shelves. Pen- whatever I put on the paper, I have to live with. 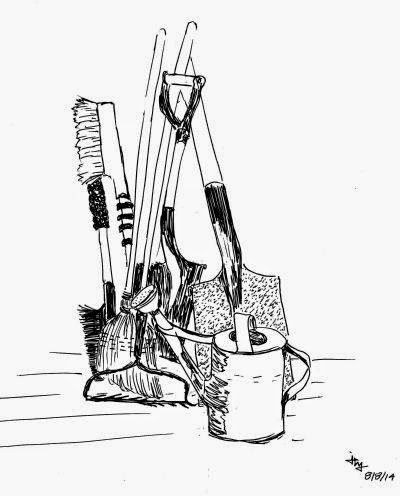 That must have been very frustrating!!! Nice drawings a good way to work off negative feelings ♥

I've done the exact same thing with the memory card. It's very frustrating. You did well with the drawings though especially the second one.

Ugh. Isn't that frustrating? :( My mom did that before with her old 35 mm camera. It was very difficult to tell if you had film in the camera or not and she'd forget and then take all sorts of photos....with no film. Happened more than once.

Your drawings are amazing.

You are telling the saddest joke of the day.

It so frustrating - yet it has brought out the pen and two very nice pictures.

Fury motivates.
Yes. It. Does.
And art heals
:)
So it's a perfect heART motivation.

These are wonderful drawings and I love your many talents. I'm am so, so sorry about the memory card, though. Today will be better, right?

Thanks so much for participating in August heART!

Sorry about your misfortune. That has happened here too. Fortunately, our [Panasonic] digital camera has internal memory for just such occasions. Retrieval procedure is a bit tedious, but worth it.

Sorry about the missed photos, but great drawings!

Carol- if only I could get serious about art when I'm not angry...

Lin- even worse with film! Except, I suppose you might realize it when you got past 24 or 36, and the camera was letting you continue.

rainfield- it is a sad story...

Rose- your comment means so much to me. I wish I were motivated to participate more, but at least you got me to do some things.

Chuck- mine does not. But I do have a small extra memory card that needs to be kept in the car. At least when I discover the problem there will be a solution closer than home.

Vanilla- thanks, my friend.

Good drawings but I had my heart set on seeing those pictures. Boo hoo.