After noon it warmed up above 50 and I uncovered the trailer. The tarp is ageing quickly and has spread little disintegrating flakes all over everything. Surprisingly, even though the paint was hours dry when I covered things, a lot of them stuck. Not very happy about that. But today's story isn't going to be about paint. (I'm hoping to bring you that tale tomorrow.)

Today I'll tell you about two little repair jobs that are part of this window project. I showed you this before. It's where I pulled off the window framing board that was put on so crooked the window screws couldn't engage it. That old adhesive residue wouldn't come off, so I just left it alone. 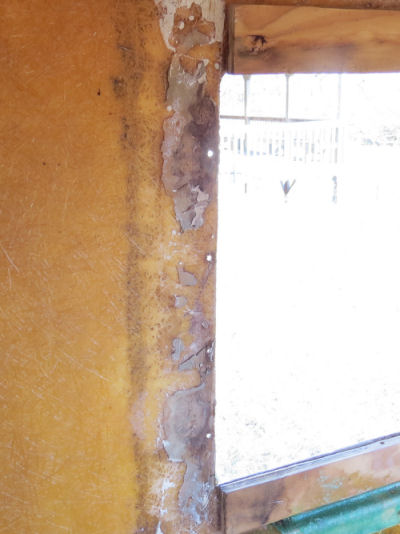 Bought a tube of Liquid Nails Heavy Duty, and gave it a couple of strips. All it has to do is stay in place beside the window to receive the screws. 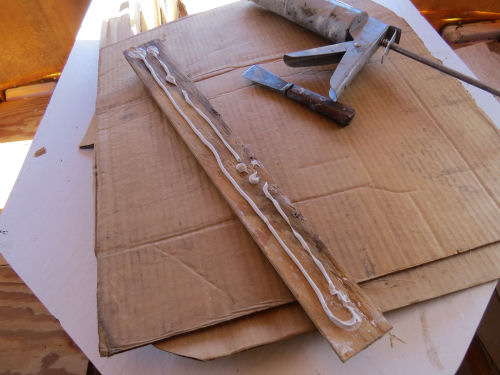 Clamped it in place. I'll leave those on till tomorrow. Then we'll know if it's staying put. 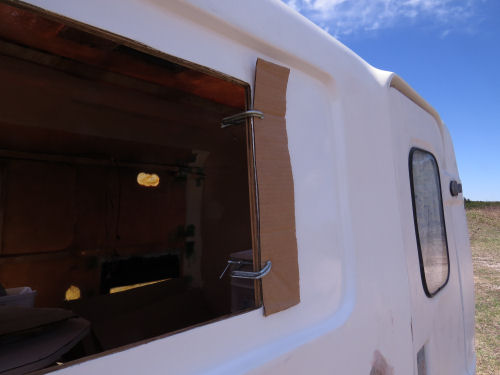 The other repair issue was the dry rot in the plywood of the bottom window frame piece of the rear window. There was also a tiny bit along one side of the front window. I decided the way to deal with that was an epoxy product called "Git Rot." If I'd realized that I could just glue up a different framing piece, I might have just replaced them, but I already had this product, so I'm using it.

It's a two part penetrating epoxy product, and it's extremely messy, but it does clean up with plain vinegar if you do it before it hardens. You mix three parts of the stuff in the squeeze bottle with one part of the curing agent, and shake hard for a minute. This means you need a bottle with a good lid. The directions say that the kit includes a mixing bottle. Mine did not, so I had to hunt up a small jar with a lid that I was willing to sacrifice. I bought the syringe (two of them in a pack) separately. 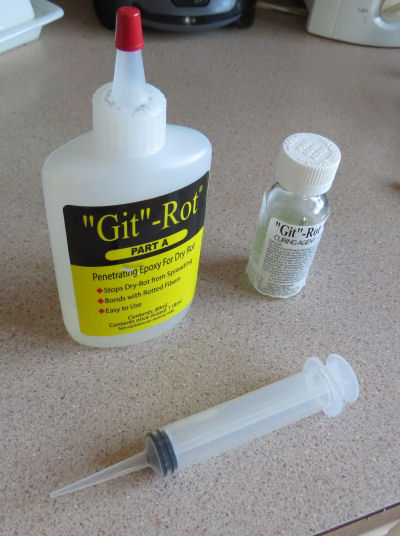 I mixed some up and thought I had overdone it. Before I was finished I filled the syringe four times. But the wood soaked it all up, so I guess it was about right. You want to poke or drill holes in the dry rotted wood to create even more spaces for the epoxy to fill. I made some channels with an old ice pick. The mixed solution soaks into the wood and spreads by capillary action. I wasn't sure how that would work, but as long as you took it at a somewhat slow pace, it was fine. It kept soaking it up, and not dripping out the bottom of the board, so I kept putting it in the holes and cracks.

It's hard to see, but the dark shiny places are where I applied the epoxy. The very center of the board is still a little wimpy, but I'll check it tomorrow after the epoxy hardens. I can always add a little plastic wood. I got the stuff all over me, but it did indeed clean right off with vinegar. 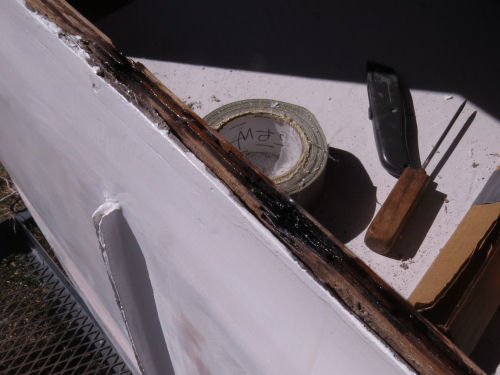 I also worked some more on the windows themselves. That is going to be one horrible project. I don't even have one done yet. I'll talk about them another day.

There's supposed to be zero chance of rain tonight, so I'm leaving the trailer open. Hope I don't regret that, but I don't want more of the gray chaff from the tarp on it because I did prep the places that need their last coat of paint except for wiping with solvent. I'll probably buy a cheap drop cloth. The wind will destroy it rather quickly, but maybe it will last until I can get the windows in.

Edited July 2020- The Git-Rot was not sufficient for the extent of the problem on this piece and I had to replace it anyway. The Liquid Nails does a really poor job of holding to the fiberglass. Auto Windshield Adhesive does a much better job. And I used it to hold new pieces of rear window framing. See Floor Drains

In other news: I wrote in the morning. Actually I worked on office stuff till 4 a.m. Couldn't sleep so I decided to at least be productive. That means I'll sleep tonight, right? Oh yeah, and I did laundry.

I would be horrible at jobs like that. They require wait time and I have no patience for waiting while things dry.