Spring for a Birthday


Today was a beautiful day, and although I did not go for a hike, I did do exactly what I wanted for my birthday.

The one pasqueflower that keeps on surviving bloomed for me, 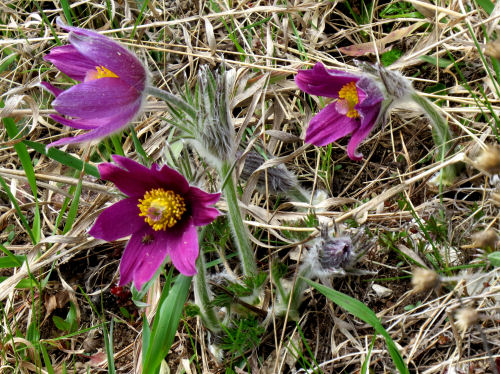 as did the first of the daffodils. 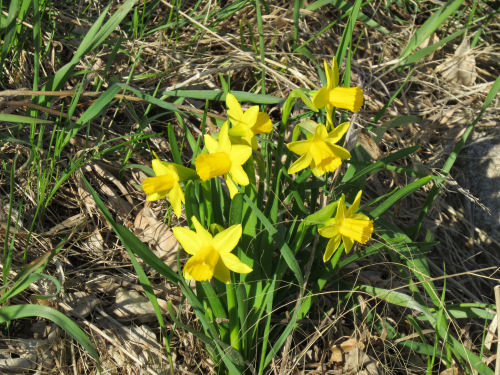 I worked on my next chapter in the morning, and spent most of the afternoon doing the last things to get the trailer ready for a (not finished but useable) road trip. 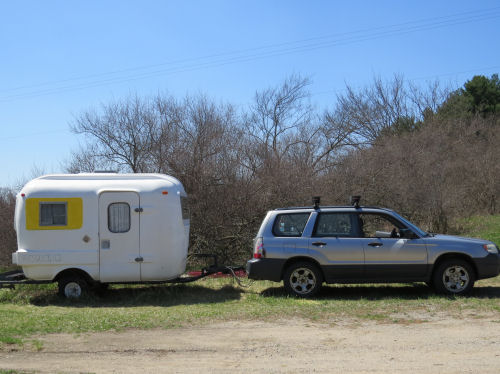 1. re-connecting the wires for all the lights. I had numbered each end, so that was just a matter of hooking them back together and then checking to be sure they all worked. They did.

2. getting the tires up to pressure. I have a tiny compressor that works, but it's slow.

3. the thing I actually did first, and was most important, bracing the interior. This trailer had most of the internal structure removed before I bought it. I took out almost all the rest, certainly everything in the front half where the door is. These trailers are really flexible. I already knew that I could have problems with the door popping open while towing it because it has done it before. I'd jury-rigged the door latch, but now I knew there could be a problem. Besides, you don't want it flexing like crazy while it's being towed.

The big issue here is that this is going to be a fussy and tricky job to build in what is going to be my primary structural support. I just didn't think there was going to be time before next Wednesday, and I need to buy another tool to do it. I came up with an easy temporary solution.

There are still a few 2x2s fiberglassed to the walls. I used a rope between a couple of nails to pull the sides inward (2 inches just with reasonable hand pressure), and temporarily bolted a board across the space. Obviously this will be in the way while we are using the inside, but it's easy to pull out and then reinstall for the drive home. 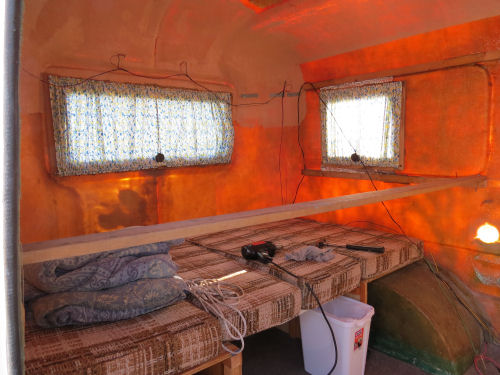 4. Take it for a test drive. I just went around a big country block and stopped to visit with a friend I haven't had time with for quite a while on the way. That was a lot of fun. She's an April birthday too, so we have often "celebrated" over a kitchen table together.

5. When I got home I wanted to finish one more job today because it was warm. I got an extra narrow strip of butyl caulking all the way around every window. I got better at it, to the point where some of it actually looks decent.

Now I have to turn my primary attention to completing some other things that have to be done before we take the trailer to the North Country Trail Celebration next week. If anything else happens on the trailer in the next few days it will be to do a bit more fiberglassing to continue some of the repairs to the shell, and a couple of temporary interior tweaks to make it more convenient as a camper. Like a place to clamp my clamp-on light, for example.

Well, it was one year ago that I quit my job and said I was going to focus on writing. I think I've done fairly well at that, for me, Ms. Lack-of-Focus. I'm behind on the date I hoped to have North Country Quest done, but that was way too ambitious a goal. I'm writing almost every day. I'm selling fewer books that I would like, but not too shabby. I have a semi-clean spot in my office (although the dining room is trashed as a sorting space). I'm back on track with working on the trailer.

My health is still really great, and I'm not anticipating any major problems in the near future, but none of us is getting any younger, and I'd like to get the trailer on the road while I'm in good enough shape to enjoy it.

Thanks for the birthday wishes! And I had cake last night at writers' group (and brought some home for today), and Omer bought me some potato chips (a real treat). So I ate too much, and completed something I really wanted to accomplish before the end of the month, and saw a friend. Life is good.

Sounds like an all around good birthday. Glad you had a good day