The Return to the Great Trailer Project


Ta-da! Yes, after not even unwrapping my baby trailer last year, here I am working on it already in 2019.

Yesterday and today I removed the rest of the windows. I had pulled one of them in the fall of 2017. I had gotten the paint stripped around that one, and simply put it back in without sealing before tarping the whole thing for what turned out to be winter and a whole year.

Here's the side with the previously removed window temporarily back in place, and the front window out. 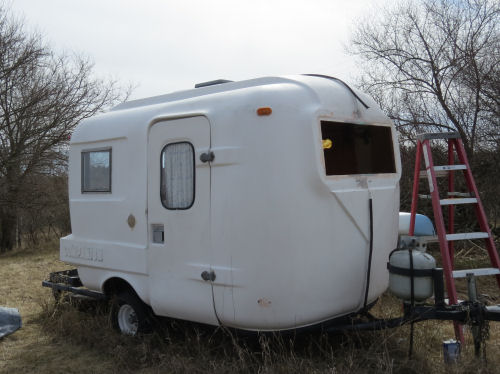 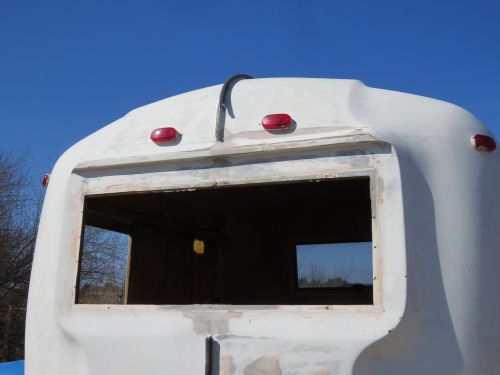 The other side window. 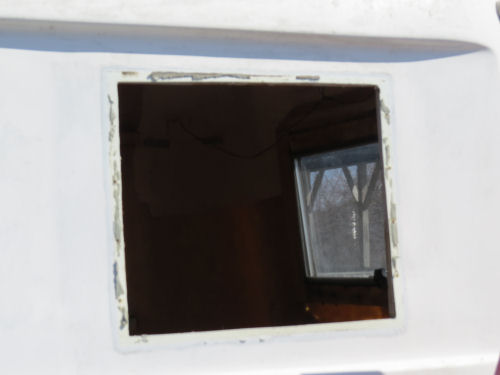 There is a reason I've started on it in April. Since I do better with deadlines, Marie and I have decided to take it to the North Country Trail Celebration May 2-5. No, don't panic. It's not going to be anywhere near done by then. But I do need to do the following:

Paint around all the windows frames so they can reinstalled and properly sealed.
• Pull out the windows. DONE
• Repair the wood in two of the frames. Can't do till temperature is above 55 for epoxy repair
• Replace one of the pieces of wood in one frame. It's in the wrong place and the screws don't even engage it!
• Strip around the window openings. Almost done- worked on that yesterday and today. Stripper works poorly at temps in the 40s, but it does work
• Clean residue around the window openings. Started on this today
• Clean the window frames.
• Lubricate the window mechanisms.
• Decide if I'm going to apply some sort of sealer/coating on the aluminum. Waffling
• Do the actual painting. Have the paint, but can't do till temperature is above 55 degrees
• Reinstall the windows. Have the butyl sealer tape. Need new screws
• Replace one broken window knob. Ordered today

Reconnect the basic wiring for the lights.

Possibly build in the primary support "beam." I need to assess if it's too flexible to drive without this in.

Clean out the inside mess, so we can at least sleep on the floor.

It's going to look ugly to use, but so be it. At least it will be a start. If I don't get cracking on this, I'll be too old to play with it before it's done.

And part of the decision to start this so early in the season is that I managed to cook up a way to put the tarp back over it alone for covering it when rain is expected until the windows are back in. And it worked!

The result is certainly not good enough to withstand wind storms, but it should be OK for the short term protection I'll need till the windows are back in properly. 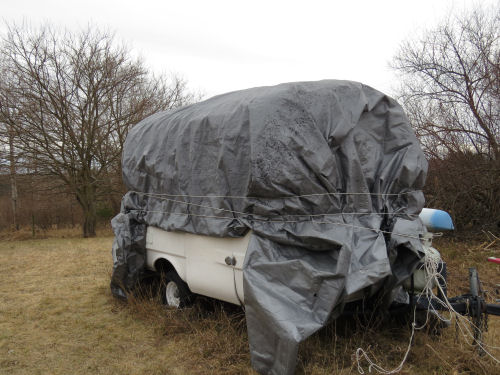 My big idea? Fasten a 1x3 along one edge of the tarp, and then attach ropes to the bar. I was able to pull the tarp over the trailer by myself. Good thing I did it before much of a breeze came up, though. In a wind it would be too hard. The tarp is really heavy. 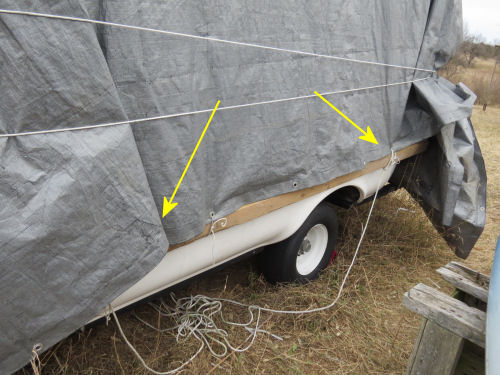 Hiking tomorrow, then rain Saturday and part of next week. But I can work on cleaning the windows inside the house.

In other news: I worked on my story in the morning and did a bit more sorting this afternoon before working on the trailer.

These are work days 62 and 63. (Not full days, of course, but just counting the passage of time that I have actually worked on it.)

Posted by Sharkbytes at 8:03 PM

Is that one of those Casitas? We've seen the inside of those when two separate campers showed up with them at our campground. Soooo cute!

I hadn't realized that you went all of last year without working on it. Good job on figuring out how to get that tarp on by yourself.

Like Ann, I'd failed to notice last year's drought on the trailer project. Good to see that back on the docket.

Good luck with that reno plan! give us lots of reports so we can follow along.