Well, all the paint that's going on before the windows go back in is done. Looks goofy, and if you are close up, the edges are feathered (on purpose) but it's going to be that way for now. I have things to say about the painting process. But as you can see, at least some of the trailer is going to be yellow. It will be yellow and white. 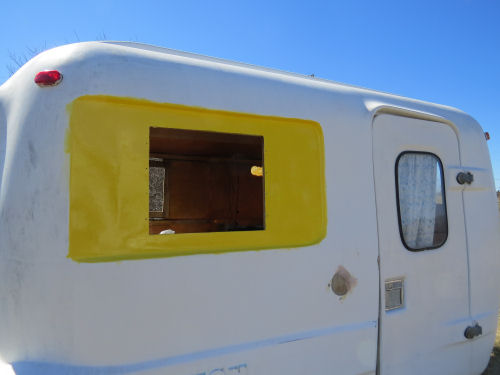 As a reminder, if you've stumbled into this post without seeing prior posts, I'm doing two things that aren't "right." I'm not painting the trailer all at the same time, and I used a brush rather than a roller for these smaller areas. 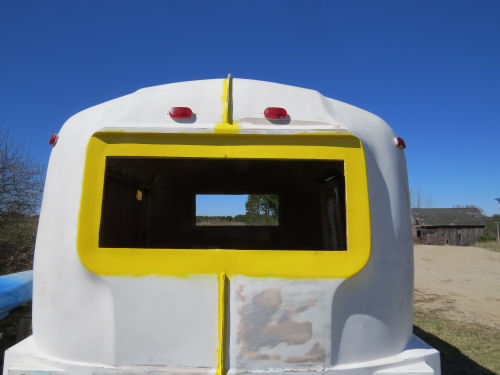 I had previously gotten the primer coat on, and a few days ago, I put on one top coat of white in the places I'm doing right now. Between each coat of the Interlux Brightside Marine Paint you must sand lightly with anywhere from 220-320 grit paper. I am using 320 and I like the result. Used 220 on a couple of spots where something had blown onto the paint and needed to be sanded down. Then before the next paint coat you wipe with the Interlux 333 Thinner. 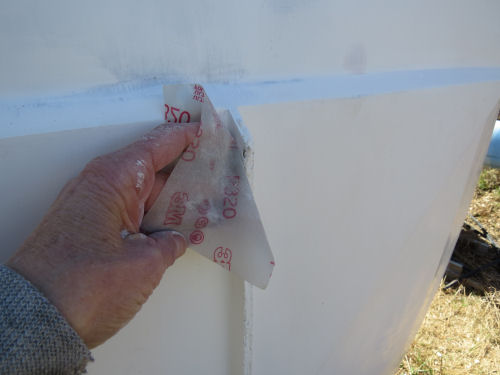 The other side window, and the roof seam. 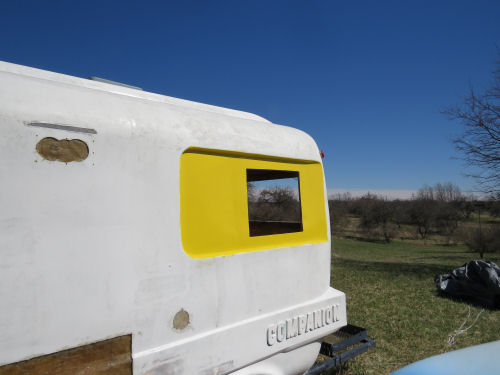 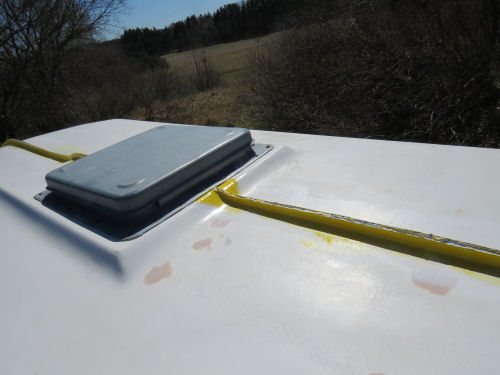 The front will remain white, so this side looks just the same as you've seen it all along. You'll have to trust me that there's new paint there, haha! 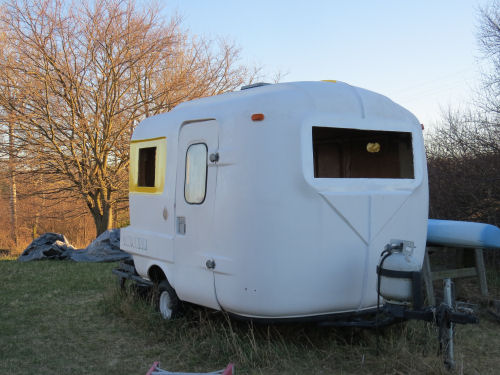 Now for the stuff I've learned. I'm going to have to downgrade my expectations for how this is going to look. Apparently, I'm just not able to do a good enough job with the methods I'm using. (Working outside, not spraying are the two big ones)

First of all, the texture of this paint is thin and sticky. It says to apply at least two thin coats. I think what they mean is two THIN coats. I've always tended to put paint on too thin, but I could not get this on thin enough. Let me explain.

For the first topcoat that I put on the other day, I applied it vertically and tipped (feathered) it horizontally. This was the opposite of how I did the undercoat (to get better coverage). I decided this was a mistake because the horizontal strokes tended to sag and make wavy run lines when it dried. I sanded the worst of these before I did the final coat today.

So today, I applied it horizontally and tipped it vertically. In other words, the final strokes were vertical, the same way paint tends to run so you wouldn't think there would be sag lines. But there are, and I couldn't get the paint on any thinner. I was brushing it out a lot before I tipped it.

I'm not happy about that. Let me point out however, that you are really supposed to apply this with a ROLL and tip method if you can't spray. I thought I could get away with a brush for these smaller areas. I have a couple rollers to use when I get to the bulk of the trailer. So I guess I'll find out if that makes a big difference.

I was hoping I could do all of the first topcoat in white and just do one coat of yellow. The jury is still out on that. I'll have to look closely when this is really dry. But, this will be fine to put the windows back in and the Trim Loc on. Then if I need to do a second coat of yellow I can just paint close to the windows without needing to remove them.

The cleaning of the windows is one huge slow project. I almost have two done. You'll probably see details on that tomorrow. I would like to get the windows in tomorrow afternoon, but I don't know if I can pull that off. I'm probably safe to leave the trailer uncovered with the windows out until Monday afternoon, so it's possible I can get them back in before the rain comes. Stay tuned!

At least the Trim Loc should be easy!

In other news: I had a trail meeting all morning. Other than work on the trailer, that's all I did today.

It's looking good to me. I hate painting so this would not be a good job for me.