This is the last of the seasons displays from the 2019 Philadelphia Flower Show by the American Institute for Floral Design. It's also possibly the last of the pictures I'll bring you from the show. I have something else for tomorrow, and a hike on Friday. So if you are bored just stay tuned. Things will change. That's one thing that sure to be true of my life.

The text for winter was: "A Time of Retreating and Reflecting. Winter branches are clothed in glittering snow- frozen crystals, temperatures begin to rise, the ground starts to thaw, and the former world we once knew beneath that blanket of white is revealed." (reminder- I did not write these blurbs. These folks are great floral designers. Writers, not so much.)

As you can see, that tree trunk construction appears again in winter. I wish they would have made these three-dimensional instead of flat. You could still see through them, and it would have been easier to recognize what it was. Of course the primary color for winter was white. 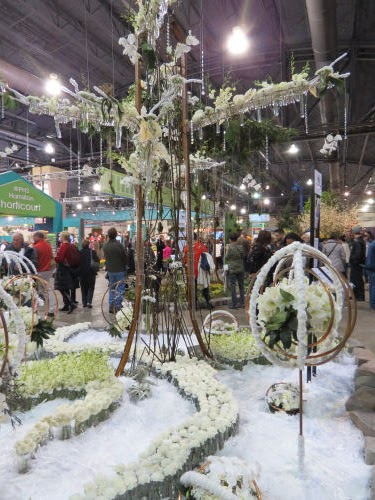 I did love the "ice" and "frost" on the branches. 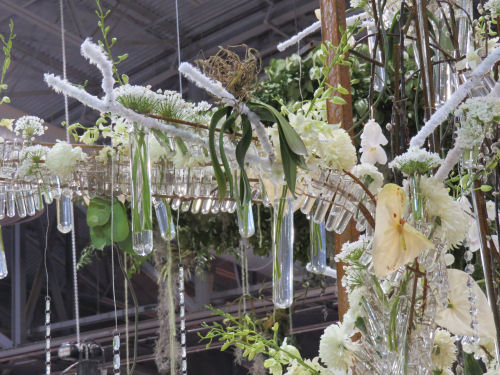 Something about this whole display made me think "Russian." Maybe I'm just associating it with Dr. Zhivago! 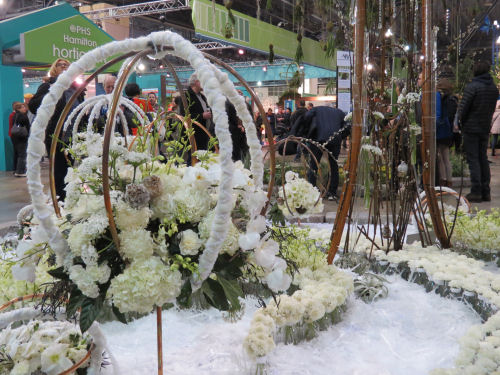 Of course, there are a few more cool pictures I have, but I'll maybe just save them for a slow or dull day when I need something.

In other news: I wrote about 1000 more words on the short story that I've tentatively named "The Valley." I spent an hour sorting crap. Actually timed it to be sure I wasn't just fooling around. (I'm afraid to jinx it by saying anything out loud, but I'm trying to clean up a bit of my office). Then... well, I'm just going to save what I did next as a surprise for tomorrow.

This one isn't bad but the lack of color makes it less appealing than the others. But then again, it's winter so you don't get color...lol The ice and frost is a nice touch.