Today it rained pretty much all day. That's sort of the good news. I spent a lot of time inside the trailer watching carefully to try to find out where it was leaking except for the door. That's a given.

Talk about insidious. Look just ahead of the arrow point. See that little weep spot? That is the source of an awful lot of the water that spreads on the floor. As far as I can tell, it's all of it, except what is getting in the door. It must be a place where there isn't quite enough resin impregnating the fiberglass mat below that big hole where the air conditioner was. It runs right down the wall and pools in a little trough at the edge of the floor and then spreads across the floor. Amazing. 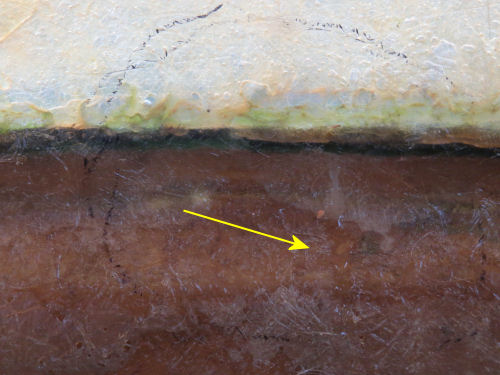 Technically, I'm still working on that air conditioner hole patch job. There is more fiberglass filling to do on the outside, and then Bondo, and then paint. Nevertheless, I'll make sure this whole area gets some more fiberglass work when it's dry.

Then, there's the door. The rain was not from the east today, so the water didn't actually blow inside. But it does come down the top of the door and run down the inside face of the door. Then it drips off to the outside because of the large gap at the bottom. But I tried for a temporary fix that will lessen the amount of water that gets in.

Found pool noodles still at the dollar store. Made gaskets. Water was still dripping down inside. 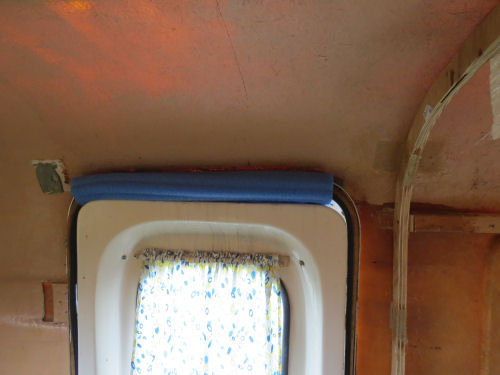 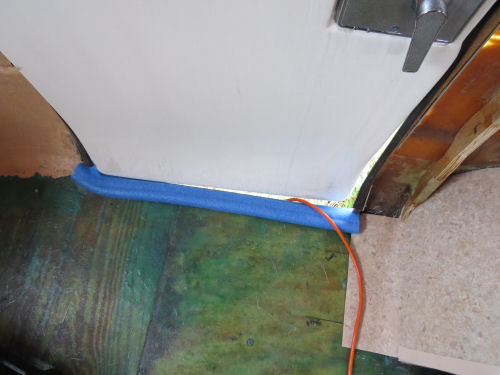 On one trip where Marie and I were in the trailer in a big rain (when the door fit even more poorly- before I had done anything about the bracing) we discovered that if you can find a way to fasten plastic inside above the door and then drape it outside, the water has to run back out to the outside. Well, the pool noodle solves the problem of how to fasten the plastic in a heartbeat. I tucked a trash bag into the cut edge that slipped over the door frame on the inside and flapped it to the outside. 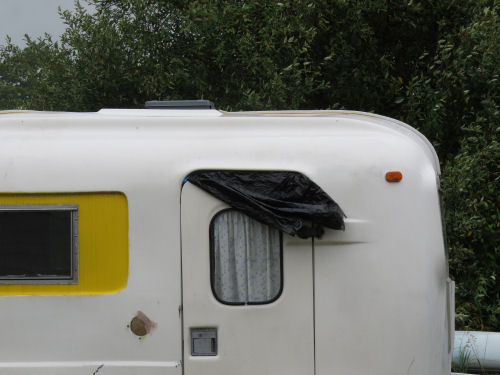 The other thing I learned about rain is that it and fiberglass work don't mix. I thought I could continue putting the braces in by just working inside with the door closed. Got one batch of fiberglassing done on the brace I worked on yesterday and the second piece. Well... the resin won't set up in 100% humidity. Hours later, it's still soft and slidey. (Yes, I remembered to add the hardener.) Anyway... I got one more step done on that puzzle. Since I only have 5 clamps, it's best to work on five strips at a time, and that's about what one batch of resin will do anyway.

The rain is supposed to end before I'll get out there working tomorrow, so hopefully, I'll be able to keep going with the braces.

In other news: Finished my newspaper column in the morning, did errands along with getting the pool noodles, and worked on the trailer. That's about it.

Well the rain provided you with some useful information. So will that resin set up once the humidity is down or did it need to be scraped off