I thought I was only going to be able to say that I spent the day waiting for water, but one wall happened!

This is what the afternoon looked like. The skies got darker and darker and the wind was blowing pretty well, but I kept working until the sky started playing with electricity. Then I decided it was time to put away the power tools. 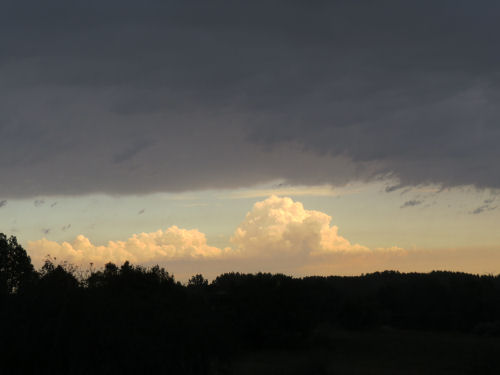 Before that happened, however, I clamped the beadboard paneling to the plywood and cut them out together. I want the two partial walls I'm putting in to be sturdy, as part of the internal support system. I decided they didn't need to be 3/4 inch ply, but I want them solid. 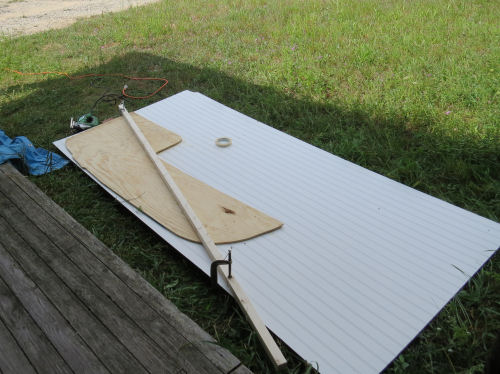 Then I glued the two pieces together, just as the storm was starting. My hobby clamps were large enough to go around the edges of this, and it's a good thing. It needed some persuasion to stay together evenly. And I had forgotten how much I hate the smell of fresh-cut masonite.

As I was cutting this, I was having second thoughts about my wall covering choice. Given how totally, totally un-true everything is, suddenly a wall board with vertical lines seemed like a bad decision. I chose to make the longest straight edge line up with one of the grooves in the pattern.

I also thought maybe it was going to chip like crazy when I cut it. I tried a scrap first, with masking tape on the finished side and clamped to a piece of scrap wood. I cut a wavy line in that (scroll blade on the sabre saw), and it was fine. So that was a relief.

But I ended up taking the glued and clamped wall into the house because it started pouring. The wait for the water from the sky was over. 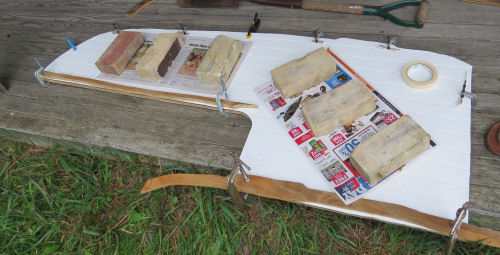 Went out and sat in the trailer while it was raining. Still weeping under the old air conditioner hole, but I got the leak to move. I'm not too worried about this. I'll keep adding to the outside fill every time I do a batch of fiberglass, and I'll get this one stopped. 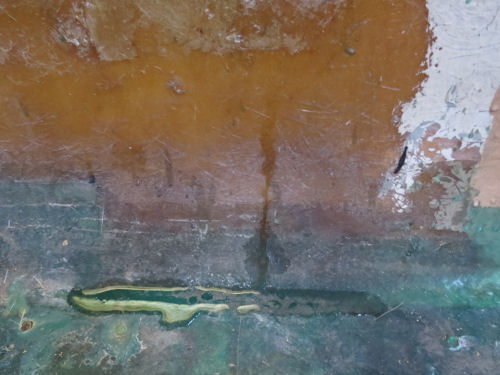 What I was hoping for was to find the source of another leak. When I moved the table the other day, I discovered another puddle in the center back. I watched diligently, but not the slightest bit of moisture came down the back wall. Well, Marie and I will probably have some chances to chase it down on this trip.

I also did some non-trailer odds and ends, and ate dinner, and the sky cleared up and the sun came out. I REALLY wanted to get more done today, so I went back out. The wall pieces seemed to be holding together fine, even though they hadn't been together anything like eight hours. But I was feeling impatient.

So I screwed that wall in place. It will have to come back out again when I put the flooring back in, but that's OK. This will give me a chance to have a test run with it to see if it's working out. I tacked the front uprights of that bench to the floor, and put on the bench tops, tacking in place the one that doesn't need to provide any access. That nicely holds things more rigid. The others are loose for now.

That side of the trailer is ready to go! It's pretty cool to have one tiny bit of the final finish wall in place. (No trim yet, of course.) And it looks fine! The vertical line along that front edge is where it needed to be no matter what is actually vertical (although that pretty much is). 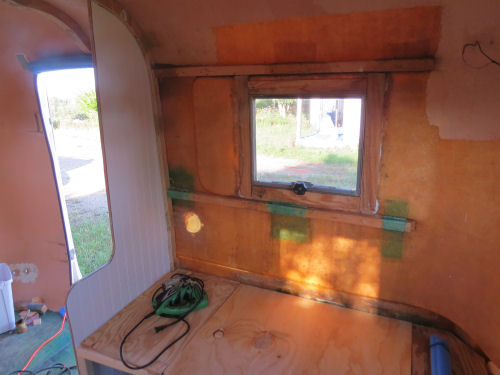 I decided to do a little bit on the other side. Worked on that back bench brace. Of course, it's not the same as the door side, so I had to just do it in two pieces. It's ready for fiberglass.

And I made the extension for the bench upright for that side. It's ready for corner braces.

That "wall" is just the old bench stuck in there upright to give me a sense of what the wall will look like. I have it marked out on the plywood sheet, but things were too wet on the porch to try to cut it out this evening. But I'm in good shape to continue tomorrow. I checked that back brace with a level, but it sure doesn't eyeball right. (Not that little nubbin- that's just balanced there.) Will check again before I add fiberglass. 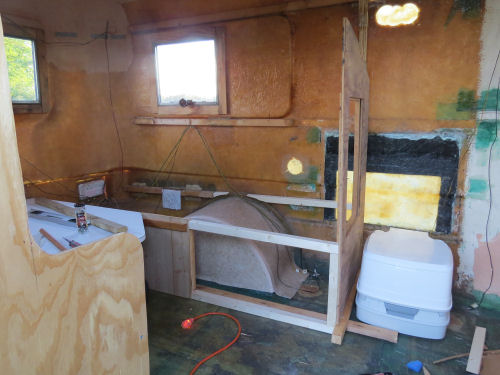 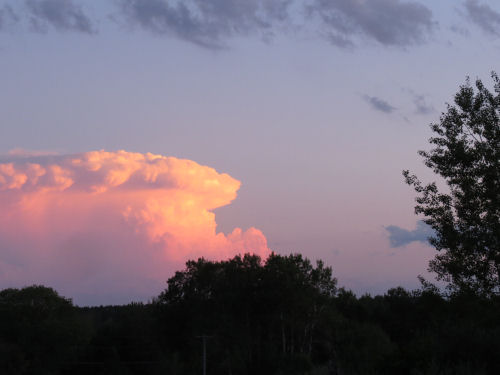 "
I really want to get this second bench and wall done so I can move on to some temporary refinements. Marie and I are going to live in this for almost 3 weeks, and I can easily jury rig some pieces of the storage so that things won't be such a mess inside, with nowhere to put things. If I get the benches and these two walls in place, then I'll have time to fool around with the little things that will make our "home" more pleasant.

But now, I'm really ready to settle down. I didn't get to sleep till after 3 am last night because I was just so wound up about the trailer. Could not stop planning all kinds of things in my head. Solved a couple of small issues, I think, so that's good at least.

You were on a roll there. Too bad the rain interupted things. It's looking good.