Yesterday I was sick. Really sick. I'm feeling a lot better, but not enough to get out and take any spectacular or even mediocre pictures, so here's another from the hikes in September that I never showed you.

This is a Common Buckeye butterfly, Junonia coenia. The picture was taken at the University of Kentucky Arboretum. But I have seen them around here. 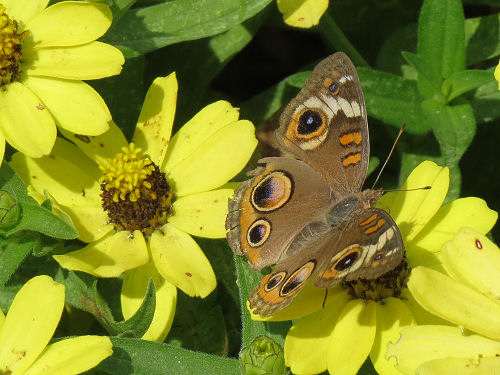 Today I felt enough better that I wrote a little and formatted a little. My eyes started to ache if I looked at the screen too long, so I just worked a bit at a time, but progress was made, which I think is better than nothing. I washed the bedding and all my icky handkerchiefs, but I doubt you needed to see a picture of those. A butterfly is better!

Biggest disappointment was that I just didn't feel well enough to go on the SPW chapter outing at Big M. Still, I don't get sick very often, so I can't complain much. Nobody gets away with never getting sick.

Posted by Sharkbytes at 6:41 PM