This does not come under the heading of most exciting blog posts ever, but it needed to be done and I finally did it.

There is no right answer to metal or plastic. Neither one lasts long enough. You can see that the metal one is dead. The previous one was plastic. 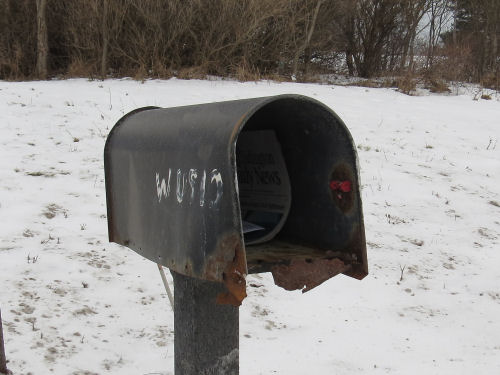 I went back to plastic again. I doubt it will last more than a couple of years. I blotted out the address number to preserve some smidgen of privacy, although most of you already know where I live. I have had to put the whole address on because Google can't seem to figure out that numbers followed by a W are west of Scottville and numbers followed by an E are east of Scottville. Several deliveries have been lost because of this stupidity. I've argued with Google, but they know best. I only live here. 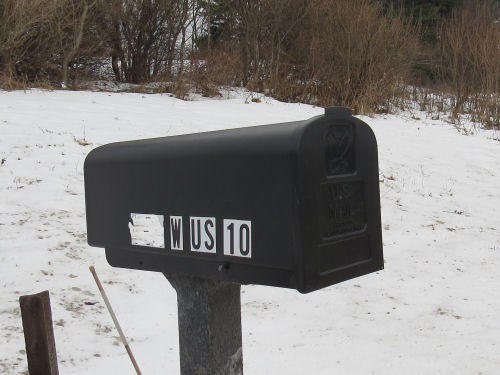 In other news: I wrote in the morning and formatted in the afternoon. I know, I've said that before, but it's the story of my life for the next couple of weeks. Roads are getting icy, but I don't have to go out.

Yep, I would say it was time to replace that mailbox. I have a plastic one that is attached to the house.

We've had issues with our zip code, which confuses a LOT of delivery drivers. Because our village does not have a post office, we shared a zip code with a local town. Being all things electronic, that town's name always came up in our mailing address...which is great for the post office, but not deliveries. We finally got our own zip code, but many data bases don't recognize it. It's crazy.

Charlee: "Back in the day, they said you couldn't fight city hall."
Chaplin: "Now you can't fight Google."
Lulu: "True story! Dada told me this! Back in New York they lived in the hills and one Christmas he ordered a gift for Mama that was being delivered by DHL, and he stayed home the day it was supposed to arrive so he could sign for it. But the package never showed up. So he called DHL and they said they couldn't find the house. Dada pointed out that DHL was making deliveries to the base camp at Mount Everest. They could find that, but they couldn't find a house in New York! Isn't that ridiculous?"
Charlee: "Well, Mt. Everest is a lot bigger than a house. It's the tallest spot on Earth."
Chaplin: "It is? We'll have to go climb it then. Because highest cat wins, you know!"