As I predicted, all that happened today was reading my new books and playing my games. It rained and was dark and dreary outside.

I learned something totally awesome! Actually, I knew the fact itself, but what I did not previously grasp was the timeline of the event. You probably know that the entire Great Lakes basin was once a single glacial lake. That was known as Lake Algonquin, and it basically looked like a larger Lakes Superior, Huron and Michigan with the Upper Peninsula completely under water. This was 10000-7000 years ago.

As the glacier retreated, the water lowered. The entire lake drained north to what we now call Hudson Bay.

The next step, after the glacier was gone, was that those three lakes were essentially as they are now, but the water was higher. There was no St. Mary's River, and no Straits of Mackinac- at least as we think of them. The three lakes were all at the same water level. This is known as Nipissing Great Lakes. This all makes sense, right? However, at that time the lake drained eastward from Georgian Bay, instead of what we now think of as normal- down the St. Clair River into Lake Erie. Notice how wide the connection between the basins is and that there is a channel across the tip of the Lower Peninsula. 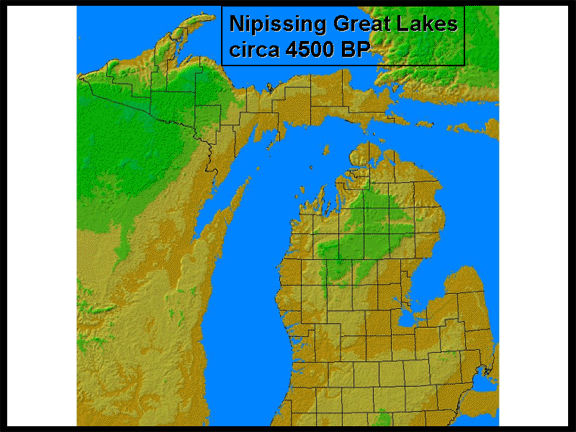 But what I did not know was that the time frame for this was about 7500-3500 years ago. That means these lakes were all one when the mysterious prehistoric copper mines in the UP were in use. Moving the copper on rafts or in boats would have been a lot easier than it is now. No rapids to navigate. A shorter portage to the Mississippi watershed in the area that is now Chicage. It makes the theory of intercontinental mining more believable.

Sometimes it's hard to imagine geologic change happening that people can remember, because we think of it as being "old" and "slow." But sometimes it can be current and fast. The 1812 New Madrid earthquake along the lower Mississippi River caused the river to flow backward, changed its course in places, and was the largest quake ever recorded in the continental US at 7.6 to 8.0 on the Richter Scale. The only reason there was not much memorable devastation is because very few people lived in that region at the time.

Don't get so excited that you can't sleep. You are probably rolling your eyes. But that's exactly what happened to me last night. There were so many new and interesting things to think about in the book about Atlantis that I could not get to sleep. And it took me a long time to read it because we have the internet now! Every time something I didn't know anything about was discussed I had to go find pictures or videos that explained more.

In other news: hmmm. I did cook a real dinner, which is a little unusual. 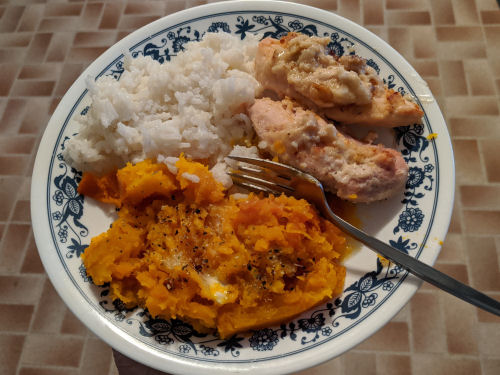 Well that is interesting. I didn't know any of that. It is nice to have the internet available for further details and visuals.
Dinner looks good. I rarely cook a full meal any more.

I find the post-glacial history of the Great Lakes fascinating. I'm always trying to translate it into today's landforms. Both the Algonquin and Nipissing shorelines run through Meaford, and it makes a big difference for the apple growing around here.

Stu- That is very cool. One of those shorelines is along the North Country Trail on the section I maintain. I need to find out which one. Actually, I'm sure I can tell just by looking at a topo map. Nipissing was about 50 feet higher than present. So I'm guessing Algonquin. 50 feet isn't much for 25 miles inland.

Ann-I love being able to look up more stuff

Chuck- this is a really neat book.