We are back to sun here, and not too awfully hot, so today was definitely a paint day. That had to start with lightly sanding the entire surface and wiping it down with the Interlux 333 solvent. Then I could actually paint. I got the second coat of both white and yellow done. Only one more to go.

Just to have something new to post, here is the back of the trailer. I decided to paint the Trim Loc (that strip covering the center seam of the trailer). That may be an OK idea or a bad one. I'll know after a while. 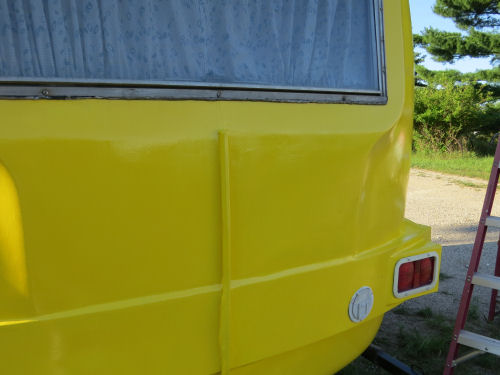 Now let's go back to some details from the other day. I wasn't as ready to paint as I thought. There was one more hole that was too big to ignore around the door. So that had to be Bondoed.

Then there was all the gunk on the door itself. This is the remnants of various glues and foams that several owners have used to try to keep this door from leaking. I'm not entirely sure I'm through fooling around with the door, but this mess had to go so I could at least paint the edges. 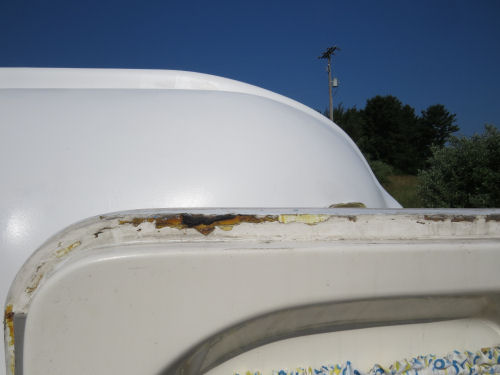 Then I had to get the curve drawn where the white and yellow meet. I'd previously played with this on the computer so I had a pretty good idea of what I wanted it to look like. The critical side is the one with the door. The curve has to fit between the door and window. So I did that one first.

Then I figured I'd make a newspaper template and flip it to mark the other side. Groan. What a disaster. I got one made, but then it wouldn't conform to the other side. I started taking measurements. Ha! The window well on the other side is longer, so the curve could not go in the same place. I tried to just move it forward, but then then lines didn't match on the roof. I ended up taking some measurements from the window wells and the taillights, and then eyeballing the rest. As you saw on Monday, it came out pretty good!

I did use masking tape to paint the initial curve with white. You can also see some of my pencil marks. I should have done a better job of taking them off because they are proving to be surprisingly difficult to cover with paint. I have striping tape to cover the seam when I'm done. 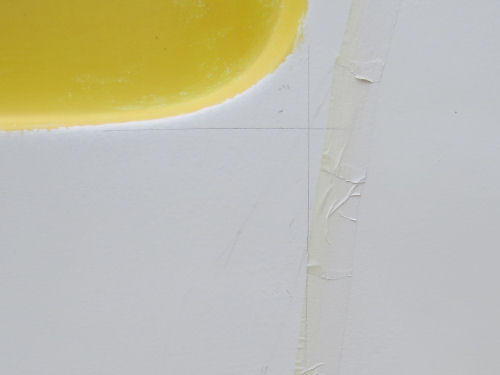 So, what else have I learned? One very unhappy lesson. You can't keep brushes soft even with wrapping them in saran wrap with this Brightside paint. I ruined two brushes, and one of them was really expensive, ordered just for this. I got something similar at Home Depot this morning, but it's not nearly as good a brush. NOT NEARLY.

When it has completely dried, the Brightside Enamel makes a really hard surface. I'm happy with my choice of paint, even if it's really difficult to work with.

This paint goes on much better when the temperature is right around 70 degrees. It's really sticky at hotter temps. And although I did the primer on the whole trailer in 2 hours, this paint is so difficult that it takes 2 hours to do each color.

Just one more picture of Sunny with two coats of paint! I know, it looks just like one coat in a photo, but you'll have to trust me. (No, it doesn't have a TV antenna! That's an electric pole) 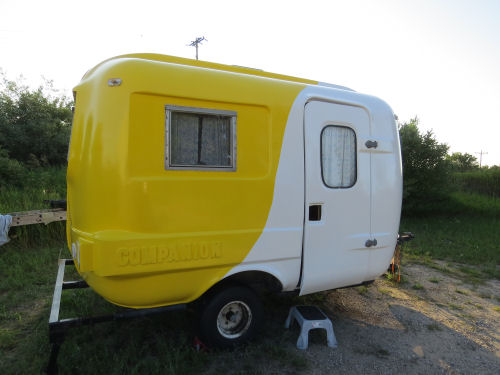 In other news: I wrote a newspaper column, went to Home Depot to get a replacement brush, and also got groceries. Then I got serious about the paint. One more coat to go!

Well it looks great already. You did a great job with this

Sunny is beautiful! I love the yellow!