I had SO much I wanted to accomplish this evening. Well, I did quite a lot. Just had too much planned, as usual.

Meanwhile, when I came home this afternoon, the resident marmot was loitering in the driveway. That's a woodchuck (or a woodcharlie for you, Chuck), or a groundhog, or a whistle-pig, Marmota monax! 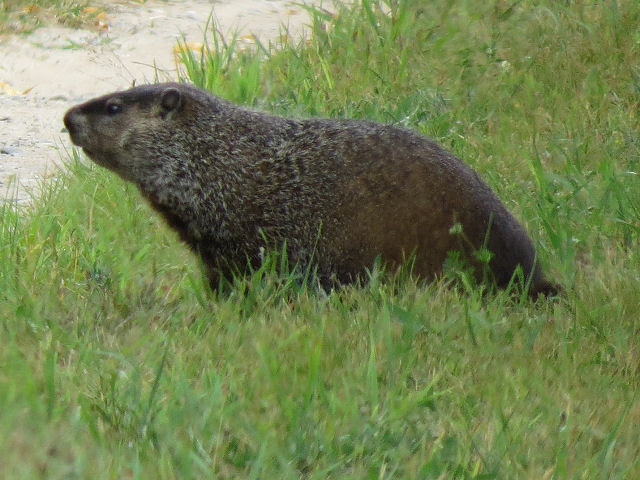 It's the largest member of the ground squirrel family in eastern North America. Wild ones are generally under 10 pounds, but tame ones have been known to reach 30 pounds. So there, Hobbes! You still have him on stripey goodness.

The name comes from the Algonquin word for the animal, "wuchak."

I am happy to report that this one has moved to the lower level of the shed we took down, and has given up the burrow right by the house foundation.

They primarily eat grass and personal salad bars set up for them by caring humans who grow rows of luscious vegetables, just for that very purpose. But, they will also eat grubs, insects, snails, and other small animals. They don't make very good pets, even though they look cuddly. Their natural instinct is to attack first and see if you are friendly later. That said, they won't charge unless cornered, but they can give a dog a mean set of face wounds.

The funniest name for them is whistle-pig. They do whistle when alarmed.

They are cute but oh so destructive to the garden I have so tenderly raised for them...how dare I think that it was for us to begin with :(

My experience with these guys is limited to seeing them run across the road in front of my car.

I do indeed call them "Charlies." I think we've finally evicted them from beneath our garage. (They'll have to dig down a foot to get below the steel barrier.)

Carol- right! They have their priorities. Thanks for stopping by!

Ann- You are lucky. They also dig big holes.

Chuck- That would be an excavation project. But they are probably up to it. :-(

I hope they are not up to it, or that they will look for easier diggings. (Pun intended.)

There's a good sized one that lives around me, I always worry that my cat will decide it's a worth opponent.

hello sharkbytes its dennis the vizsla dog hay hmm that marmot luks nuthing like the marmot frum the faymus dokyoomentry the big lebowski i wunder if the maykup department had sumthing to do with that!!! ok bye