Tonight I went to the local book club meeting, because they were doing a reader's theater presentation of a play called The Runner Stumbles.

Kind of surprisingly, I wasn't at all familiar with the play (1979). It's loosely based on the true story that was also the basis for the book Isadore's Secret, which I do know.

The actual events occurred in 1906, in northern Michigan. A nun, in a small parish was murdered.

Here, the priest and the nun have a conversation. 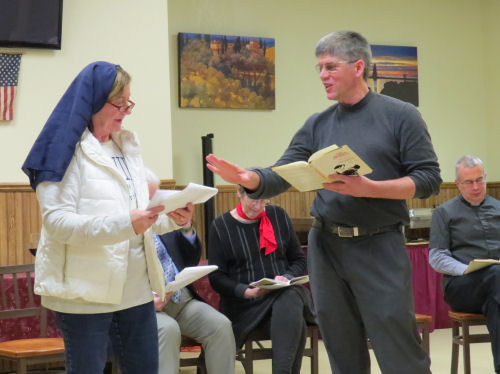 A scene from the courtroom. As you can see, the readers wore just a few pieces of costume to be suggestive of their roles. 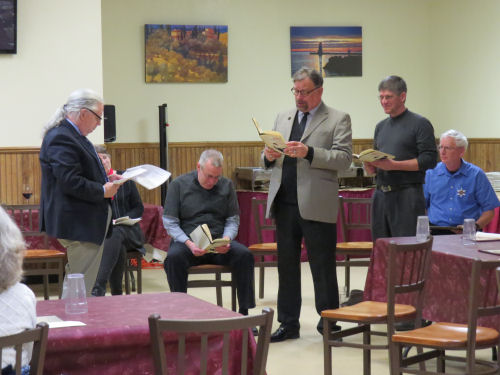 And here, the housekeeper testifies in court. 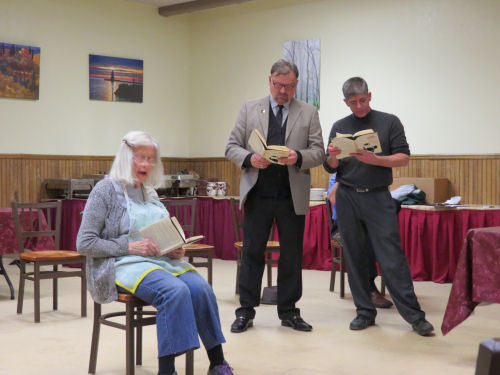 It's really a thought-provoking play. It was made into a TV movie starring Dick Van Dyke, but if I ever saw it, I sure don't remember it.

So that's my big cultural night out!

In other news: I got my entries for this year's Michigan Outdoor Writer awards sent in. That's a huge job to choose which pieces to submit in the various categories, and then to get everything scanned and turned in according to the formats they want. I also did laundry. Fun stuff coming up tomorrow. Stay tuned.

Sounds interesting. I don't think I've ever heard of it. I like how they wore a little something to fit their part