The day started out with light rain, and the red efts love that. There were hundreds of them as we walked through McCarthy Hill State Forest. These guys are standard in eastern forests, and are one of the critters I miss in the Midwest. This one is pale, as were most of the ones we saw. They are often very bright orange. We even saw rusty brown ones. 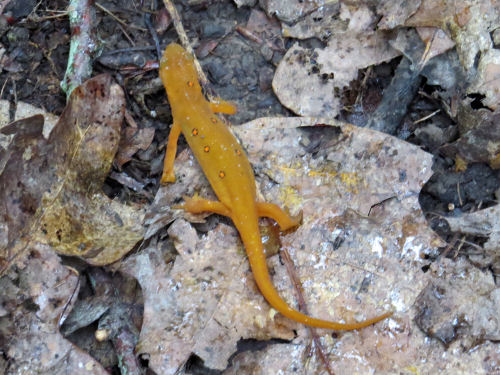 The woods was open and even though it was raining, the trail was relatively dry. 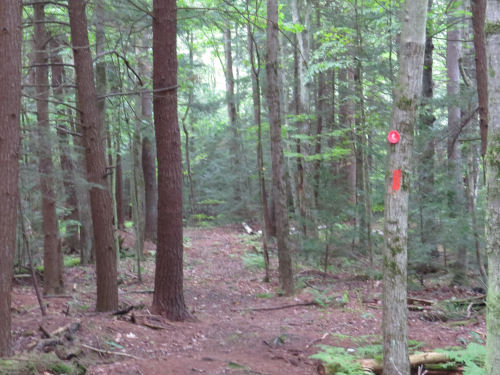 We found lots of patches of what I believe is Smooth Chanterelle. 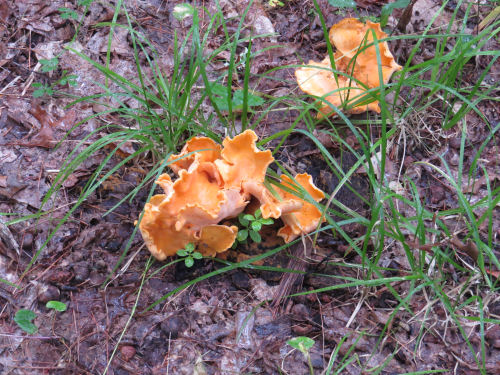 The weather forcast was for intermittent rain. We were good with that. But the forecast apparently didn't hear about the tail end of Hurricane Ida, and we hadn't either. It kept raining harder and harder. Misty hills through the curtain of water somewhere in Pinnacle State Park.

So today, most of our walking was off road, but a lot of it was unmowed grassy trail. Can you say "wet?" By now we were soaked to the skin. 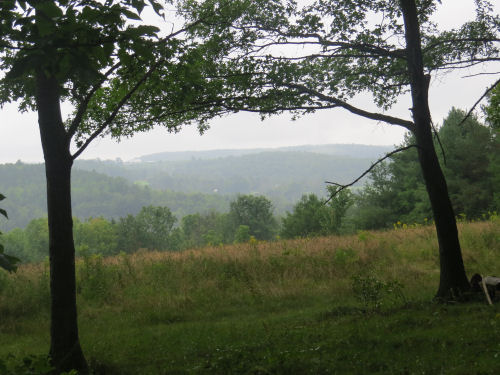 By lunch time, we were looking for anywhere with a roof to stop and eat. We found this small pavilion in the village of Addison, which the trail goes through. There was a lot of debris in the town, and we quickly realized they'd had a serious flood. Turns out, the flood was only two weeks ago. Lots of damage. 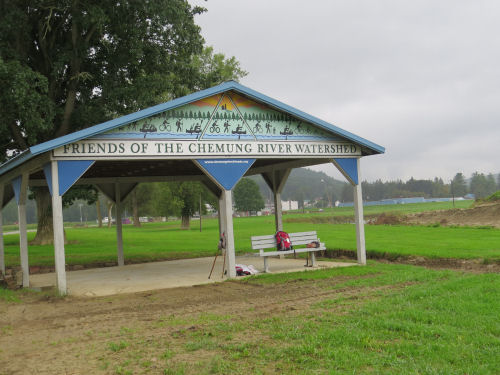 It was raining so hard, I put my camera away in my pack instead of trusting it to a plastic bag cover. There were a lot of things I would have liked to picture. We walked a long way through Addison Cemetery with lots of interesting graves. Beyond that, there was a warning sign at a small airport, "You are crossing a runway. Watch for airplanes." First time seeing a sign like that!

I warned Marie of a soft spot in the trail with our usual word, "squishy," and she responded, "I can't hear you over the splashing."

I had made an error in figuring the mileage for the day, and by trail, the car was still 4 miles ahead. But there was a way to bail out early and take a shorter walk to the car. We did this. So our total mileage for the day was 10.3, but only 9.0 of them count as progress on the trail. That's OK. It was a good choice because we had evening plans.

A couple who are good friends of Marie live only a few miles from where we are camping. I had met them once in the past, and Marie hadn't seen them for about six years. They had invited us for showers, laundry, and dinner! Marie has only been out a couple of days, but I was in real need of laundry. Winner! And look at the feast they prepared for us. Patty and Richard, with Charley looking very interested in either us or the food. 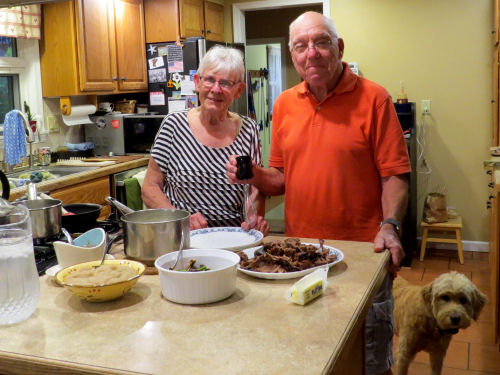 We got "home" really late, and went straight to bed. Today (9/2) it's not raining, but I have to do some computer stuff, so we are taking at least the morning off. Hopefully I'll get caught up and we can hike this afternoon.

Well that was a fantastic end to a rainy day.

Lulu: "Is that lizard thingy lemon flavored, or like orange and lemon mixed together?"