So today was the day I expanded into the "big time." Who knows if that is what it really was, but it sort of felt like it. This is a really nice mall in the Grand Rapids area, and most of the vendors (although not all) were selling franchised commercial products. Although a couple of people I know came to buy books, the market was primarily not only people who did not know me, but who came to the mall to buy from big stores like Body and Bath Works, Victoria's Secret, or Dick's. I name those three because we saw a LOT of their bags going by. Most people didn't even give the vendors a second look, but the ones who did usually bought something.

The booth was expensive, but I found an author to share the space with each day, so that cut the cost in half. Today I shared with Janet Vormittag who writes short stories about cats, and has two mysteries about rescue dogs.

I shared this story on Facebook, but I want to put it here as well. The neatest thing was that a little girl had been looking at The Secret Cellar, but she only had $5. Her mother was thinking about giving her the other $4, but they went away and said they'd come back. The girl came back alone and was trying to decide which book to get (her mother was just across the way) and another lady who had just purchased North Country Cache asked me if I knew the girl. I said "no", and the lady seemed concerned that she was alone. I said, "her mother is just over there." Well, the lady whips out cash and said, "I'd like to buy her the whole set."

Wowzer. One very happy little girl, who payed it forward by using some of her $5 to buy a copy of Devotions for Hikers for her teacher! 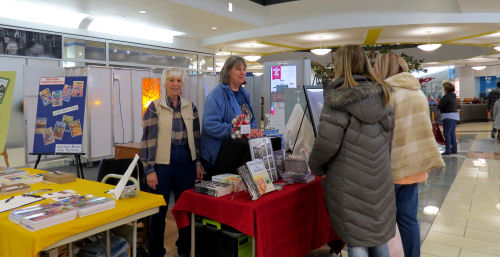 The financial success of vendors was all over the map, and didn't seem to be related to their location. I think my location is excellent. Even though I'm not in the main transverse hallway, I'm right across from the Dicks' Sporting Goods entrance, and a lot of people came in and out that way. I have no comparable event to judge this against, but I paid for the space and made money today, so tomorrow is all gravy. The only thing that is tough is the long hours. Including set-up, I was there for 14 hours today. Tomorrow isn't quite so long.

My big treat was hot soft pretzel nuggets and a Diet Coke. I love hot pretzels and haven't had one in years. Yum. 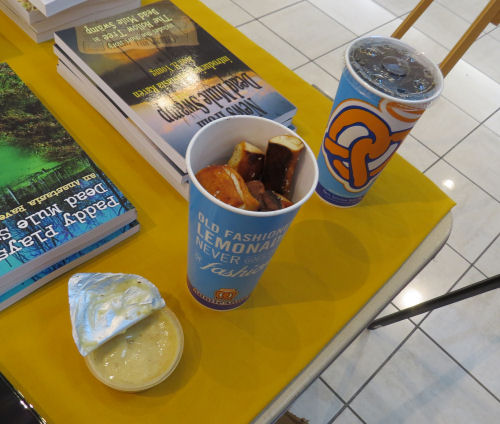 One more day! I held up well for that many people hours. Now I just have to do it again tomorrow.

Glad you had a successful day. Smart thinking sharing a space with someone else.
Such a sweet thing for that lady to do for the little girl.

Charlee: "Congratulations, that's great news!"
Chaplin: "Yes it is! And now I need to find somebody who'd be willing to buy me every cat treat in the store ..."