Wishing You the Success of the Fungi


Tonight I just bring you a little nondescript fungus growing in my grass at the end of December. 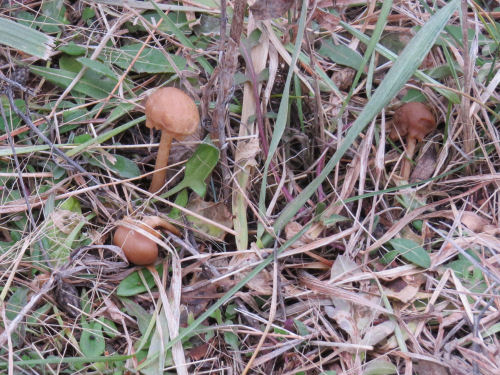 Did you know that fungi are neither plants nor animals? They have their own kingdom. They don't make their food internally as most plants do, nor eat like any sort of animal. Their cell walls are chitin, more like insect skeletons than the cellulose of plant cells. They exude enzymes which digest substances externally and then they absorb the nutrients they can use, sort of like wearing your stomach on your sleeve. Incidentally, if you eat certain poison mushrooms they can digest your liver which is sort of a horror story of it's own. You kill the thing and then it exacts a terrible fate upon you as host.

There are about 144,000 known species, but it's estimated there are over 2 million kinds. DNA testing is finding new ones at the rate of about 2000 a year.

Possibly 25% of the earth's biomass is fungi!

Of course, yeast is also a fungus, and who doesn't love a nice crusty yeasty roll?

PS- all we saw today was solid gray and rain.

In other news: I did more work on my web site, more bookwork, wrote my Get Off the Couch column for the newspaper, and spent the rest of the day reading short mystery stories by Agatha Christie and P.D. James. Research or escape? You decide.

Happy New Year.
I could never pick wild mushrooms to eat because there are so many different ones and I can never tell the difference between them. With my luck I would get one of those that would eat my liver

So nice to catch up with you!
And yes, our beloved mycelium. I was blessed a few years back to witness Paul Stamets speak at the International Herb Symposium ~ it was inspirational and rooted my appreciation and love for fungi even deeper. ::nods::