Here's the interesting sighting I promised you. On a little frozen wetland along the trail yesterday was a clear line of tracks made by some mid-sized animal. I could not pull the identity of the pattern of the prints out of my brain! Had to come home and look it up. 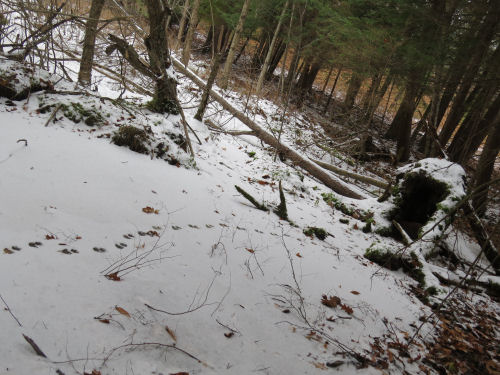 In my defense, it's been a long time since I've seen clear opossum tracks- about 9 years. Which brings up an interesting question. In 2009 and 2010 I was featuring a lot of wildlife tracks on the blog. It's not that I've lost interest, but those two years seemed to provide a lot of days that were ideal for coaxing animals out into the winter air and a nice palette on which to make the tracks. About all I've seen for the past two winters are rabbit and squirrel tracks. I hope the change is in the conditions for preserving tracks long enough for me to find them, rather than a diminishing number of critters. 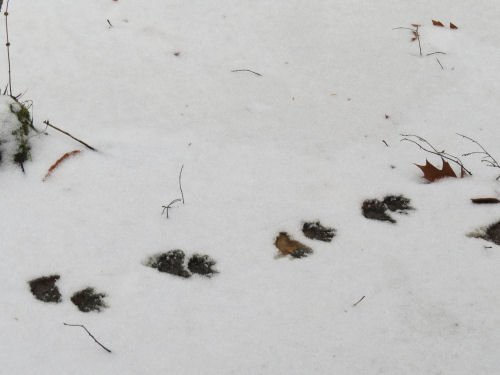 At any rate, this two-print pattern with the one track practically wrapped around the other should have triggered a memory for me, even though the prints are in soft slushy snow. The only thing not typical about this is that there is no tail drag mark, but sometimes they manage to keep their tails out of the snow. 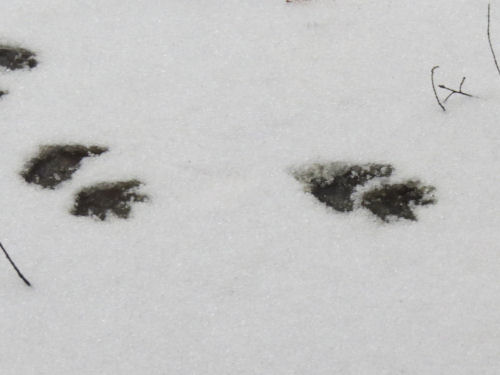 That's one of the things about learning tracks...there are SO many different permutations: snow, mud, dust, deep, shallow, animal running, walking, etc.

Anyway, I've now been reminded, and I hope this will sear the pattern into my brain.

In other news: I wrote two chapters! I hope you will see that sentence many more times in the coming days.

Interesting tracks. I wouldn't have known what they were.

Charlee: "Hmm, looks like you had a visit from our friend Vermin!"
Chaplin: "Vermin is our friend?"
Charlee: "Well, sort of. I mean, she eats ticks, so she can't be all bad."
Chaplin: "I guess that makes sense, but she doesn't seem to like us very much."
Charlee: "It might be because we insist on calling her Vermin instead of Jill, or that we refuse to believe that she's a cat."