I've been working on multiple projects, so it gets a little tricky to decide how many days to assign to this project, but I'll call it three. I'll count the day I picked up the foam later. Anyway, this turned out pretty nice, and although it was tricky, it was not as hard as I expected it to be. 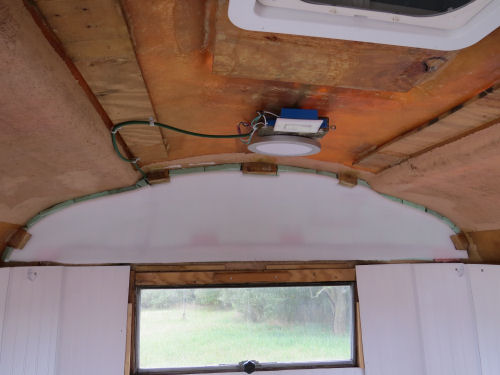 I started by gluing 3/4 inch styrofoam insulation to the upper back wall. I cut it into whatever size pieces would lay flat. Then I used the Loctite Ultimate adhesive, just a couple of strips, to hold them in place 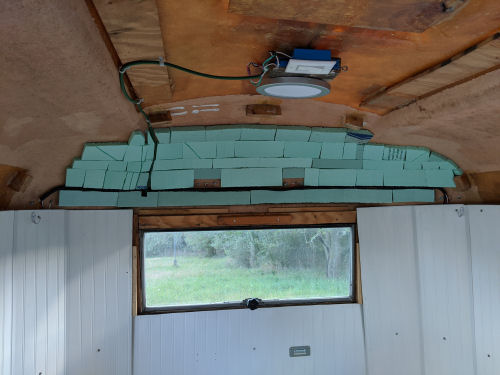 There were two goals for this layer. This is the primary insulation, and it's also an attempt to smooth the many, many curves of that space into something less multi-leveled. As I've noted before, the two sides of the trailer are not symmetric, so one side was easier than the other. But at last I had it all filled in. I used some 1" foam where I needed to take up more space, and in some places, shaved the pieces down. Finally, I filled the areas around the clearance light wires with batt insulation. You can also see that the cords are laid into gaps between the foam. 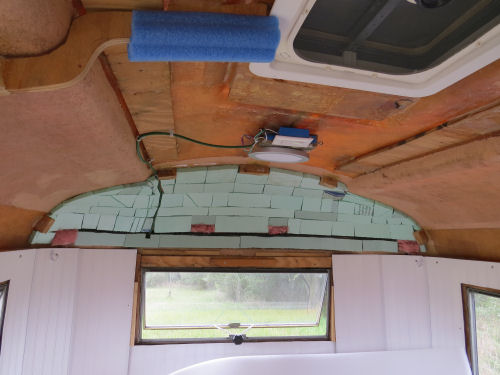 After I brought the polyethylene foam home on Monday (the white sheets), I could create the top layer. I thought this was going to be REALLY hard. I expected to have to make a cut at each corner, the way you have to remove (or overlap) a triangle from a circle in order to make it into a cone. Instead, I was able to create this shape with no cuts or "seams." 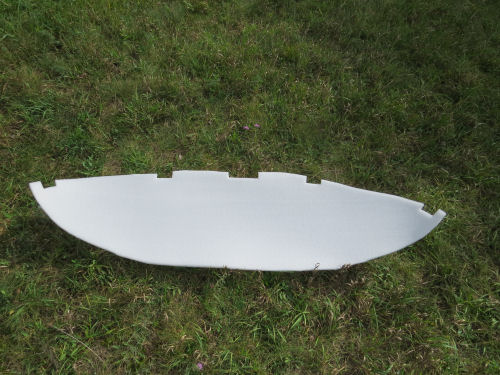 More glue, and a brace for a few hours to keep it from pulling away till it was dry. 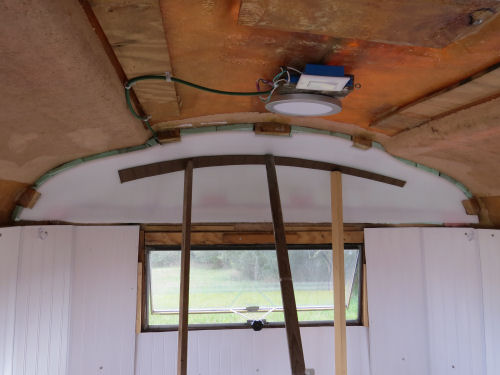 And with the brace removed it looks like the top picture. It will probably ultimately have some kind of finish layer over this, but I don't know what that will be. The white foam will be the "finish layer" for the upcoming year.

I'm quite happy. And I'm almost done with what goes in next, so you may see that tomorrow. And the experiment with the blue foam on the lower part of the back wall? It worked great, which is what gave me the assurance that this will work. I painted it white and mounted the electric panel on it. See link below for what's underneath this. 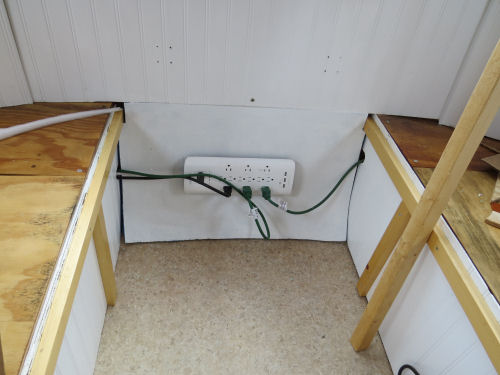 In other news: I edited in the morning and did one odd item from my list. I did an errand and went to two stores again this afternoon, and then worked on the trailer. (This illustrates one of the problems with my list. "Trailer insulation" is one item- Well! I'm not even close to finishing that one for the whole trailer.) But I did cross off two items! Big List has 73 items, 30 crossed off, 43 to go in 47 days.

That top portion worked out perfectly.

Ann- it sure did. Amazed!