There are still some miscellaneous things to show you from the New York trip, and I have nothing better. So have a totem pole that was at the Seneca Park Zoo.

Uncharacteristically, I forgot to take a picture of the interpretive sign, so I can't tell you very much about it. At the top is an owl, and below that a seated woman. 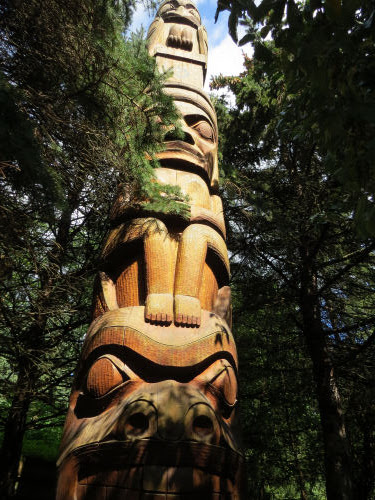 At the bottom is a beaver who has just chewed through the stick it was holding. Interestingly enough, totems were usually associated with West Coast Tribes, while the Seneca Nation is more relevant to Rochester, NY. See our visit to Ganondagan last year. So why is this here? Now I'm really annoyed that I didn't take a picture of the interpretation! 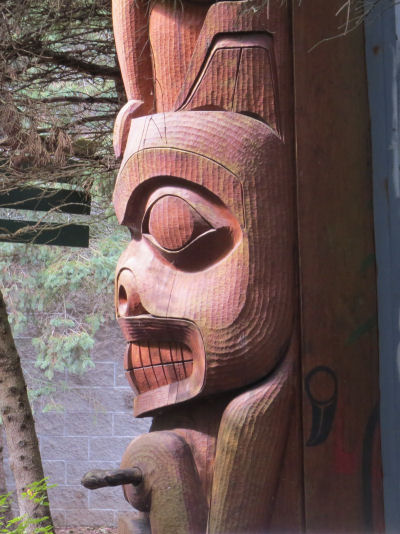 In other news: It was a frustrating day. I did a lot, but didn't finish anything. Worked on the freezer cleanup, worked on Dead Mule Swamp Singer pre-publication stuff, worked on the trailer with much frustration and one possible "victory" (stay tuned). Went to the store. Spent an hour watching videos to try to learn something that doesn't seem to be mentioned anywhere, but I finally figured it out, and did learn one other thing that will send me right back to the store tomorrow. Hopefully, I'll actually complete something tomorrow.

Very cool totem pole.
You may not have finished anything but you accomplished a lot and that's what matters.

Yes, why is that there? Totem poles are part of west coast cultures.

Stew- maybe something related to the polar bear or the seals? I really should have read it!

I'm sure you would all enjoy sitting atop the owl- except maybe Lulu! Shhh- I won't tell that the animal at the bottom of a totem is the most important. Guess Lulu is in good position.