You might remember that two years ago I spent some time in the Lakeview Cemetery in my home town and tracked down some gravestones from biological family members. I also mentioned that my father's bio mother was supposed to be buried in her family's plot, but there was no marker. My dad had told me once that she was there, but I was too young to remember where he showed me.

This is Ada E. Hall Walker, age at time of picture unknown, but I'm guessing late teens. It's the only known picture of her that exists. 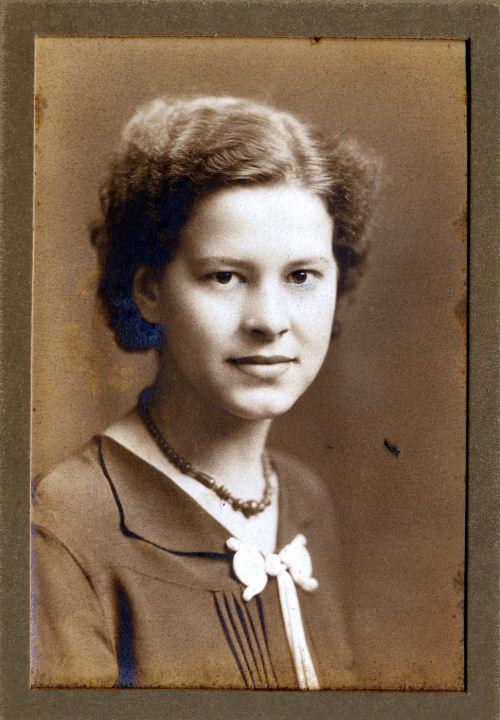 So, this month, the Interlaken Historical Society presented a program called "Name that Ghost" where they hoped to solve a few mysteries associated with the cemetery. I semi-jokingly said that if they found Ada's ghost walking around, they should ask her where she is buried.

Well! Diane Bassette Nelson, whom I do remember from childhood, is now the person in charge of all this info and research. She took on the challenge despite the fact that I knew almost nothing about Ada. Two years ago, I managed to determine that Ada's mother was Augusta Claudine Rappleye Hall. I speculated that she was born between 1882 and 1884 because dad was born in 1904. And I knew that she died rather young, but I had no other information.

Diane found Ada! We now know that she was born in January 1883, and died in a hospital in Scranton, PA, July 26, 1917. Perhaps she had tuberculosis, but the article does not say. Her father was Porter C. Hall. She died four days after Dad turned 13. I wonder if he was told of her death at the time. 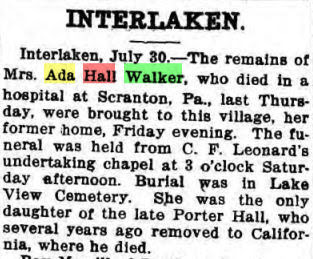 And she is buried right beside her mother. The cemetery placed a laminated paper marker there temporarily. 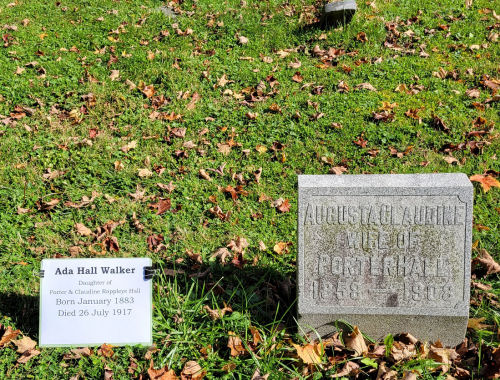 There is no one left who really cares about any of this since I'm the end of this biological line. But someohow, I feel that this has provided some closure for my dad. He was four years old when he was given up for adoption, so he had to have remembered Ada. And he cared enough to try to show me where she was. Perhaps after I finish this hike, I can get a basic headstone placed for her.

In other news, I created a Books Leaving Footprints newsletter this morning and worked on trail food. In the afternoon, I worked on the trailer and then Cathy came by, and we did some errands, including buying me a new mattress! Perhaps no more morning backaches from a worn-out mattress. That would be awesome. I crossed off one BIG ITEM and 3 small ones, but I added more small ones. 31 BIG ITEMS to do (31 done)-- so am I at the tipping point and it's all downhill from here?-- and 24 small ones (14 done) to do. 34 days to go. I know there will be a ton more small items added as the date approaches.

Lulu: "We don't have a story exactly like this, but Dada says that his Dada has a diary from like the early 1800s that was kept by someone who lived in the small town of Constableville. One weekend when they still lived in New York, Mama and Dada went with Dada's Mama and Dada up to Constableville for the day and spent some time wandering around the old cemeteries up there, and eventually they found the grave of the man who had kept the diary!"